Your 2019 Harvard UC President will be…

We ran the numbers. Here's what we found.

For the past three years, we at the Harvard College Open Data Project have correctly predicted the winners of the Undergraduate Council (UC) presidential election, but this is by far the wildest election we’ve ever seen. Nonetheless, we hope to bring some clarity through data.

There are five candidates vying for the UC presidency this year:

This is notably the largest field of candidates since we started predicting the race. This campaign has also taken place under… unique circumstances. To start, this is the first time in recent memory that The Crimson Editorial Board has declined to endorse a candidate, with many of the campaigns refusing to communicate with The Crimson in light of the recent ICE controversy. Like in past years, an experienced UC ticket — Sanika and Rushi — raked in endorsements and became early frontrunners. However, their competition have also received boosts in support. Aditya and Andrew, running a campaign to “Abolish the UC,” have mobilized students that might not typically participate in the UC election process. Meanwhile, James and Ify achieved significant publicity after their campaign video went viral on Twitter, garnering over two million views, 140,000 likes, and 46,000 retweets (including one from retired NBA star Dwyane Wade) as of writing. Altogether, these circumstances make predicting the race more difficult than in years past, but we’ll focus on the fundamentals to drive our analysis.

Of the students on the five tickets, all are juniors except for Michael Raji, who is a sophomore. Historically, junior-junior tickets have had the best chance of winning, representing 85% of tickets since 2005 and 95% of the winners since 1996. We expect that the advantage for juniors will hold in this election as well.

We also consider whether candidates have both River and Quad appeal. In this election cycle, all candidates except Michael Raji live in River houses. All tickets, except for Andrew and Aditya, are from different houses. We expect that having both candidates from one house could limit support. We also note that Mather is likely to be highly contested this year as it is home to three of the candidates running.

Established UC representatives generally perform better in presidential elections than new tickets. Previous trends indicate that tickets in which both the presidential and vice presidential candidate have UC experience constitute 55.3% of the total tickets since 2005, yet they’ve won 91.7% of the time. This year, all tickets except for PK and Mike and Aditya and Andrew have some UC experience.

Social media presence has been useful for gauging both name recognition and energy of supporters for tickets in the past. However, in this election, social media metrics do not point in one direction depending on the medium. If we look at Facebook page likes, then Sanika and Rushi are clearly in the lead with 413 likes, followed by James and Ify at 251. Aditya and Andrew did not have a Facebook page, but 125 people marked attending to their “Meat and Eat” Facebook event. Finally, PK and Mike had 80 likes on their Facebook page, while Thor and Case had 8. Facebook page likes are perhaps the best representation of support within the College, but there are other social media measures that swing in other directions.

Most notably, James and Ify’s campaign video went viral on Twitter and received attention from Dwyane Wade, Deray McKesson, and Brittany Packnett Cunningham. The video has been viewed more than two million times, which is orders of magnitude above what we’re used to seeing in a UC race. However, because much of this attention came from sources outside Harvard, and the video did not go viral until midway through the voting period, we did not consider the video too heavily when making our predictions. Meanwhile, on YouTube, both Ify & James and Andrew & Aditya’s campaign videos received close to 2000 views, while Sanika & Rushi’s campaign video received closer to 500 views.

Our primary source of information is a poll that we sent out on November 7th and closed on November 13th, the day before the end of voting. We distributed this poll through various house, dorm, and organization email lists in an effort to obtain as representative a sample as possible. While there are the usual concerns about response bias — that people more interested in the election will be more likely to fill out the poll — we believe that these issues are somewhat mitigated because the same types of students who are willing to vote in a survey are also likely to be those that would be most likely to actually vote. However, this may not hold true for supporters of specific candidates, which we will address later.

In total, we had 237 responses to our survey. This is about 10% of the voter turnout in past UC elections. We asked respondents to rank their candidates in preferred order, as they would do during the actual voting. The election this year uses a Borda count mechanism, where a candidate ranked n by a voter is given 1/n votes. We calculate the Borda counts according to our poll, and display them below. 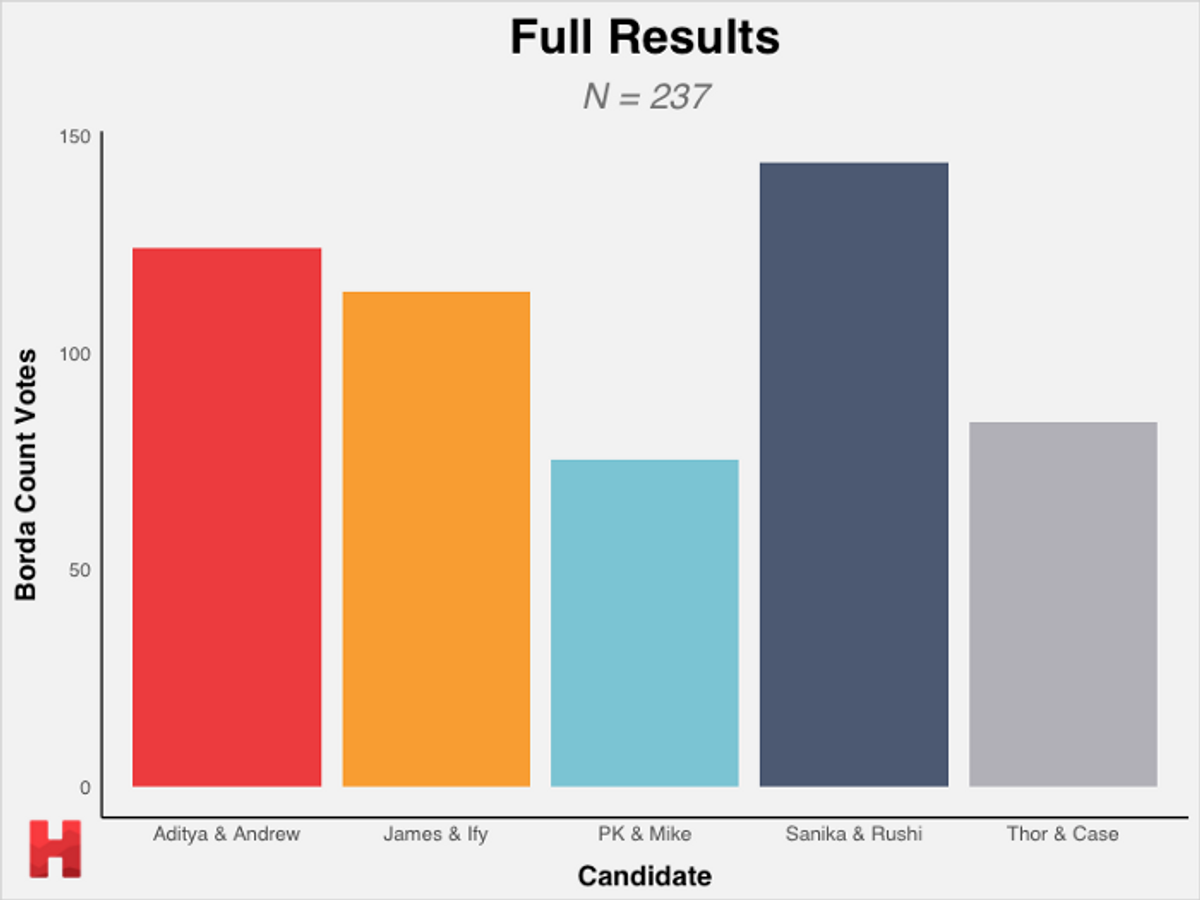 We also show the proportion of first place votes that each ticket received, which we believe to be indicative of the number of supporters each ticket has. 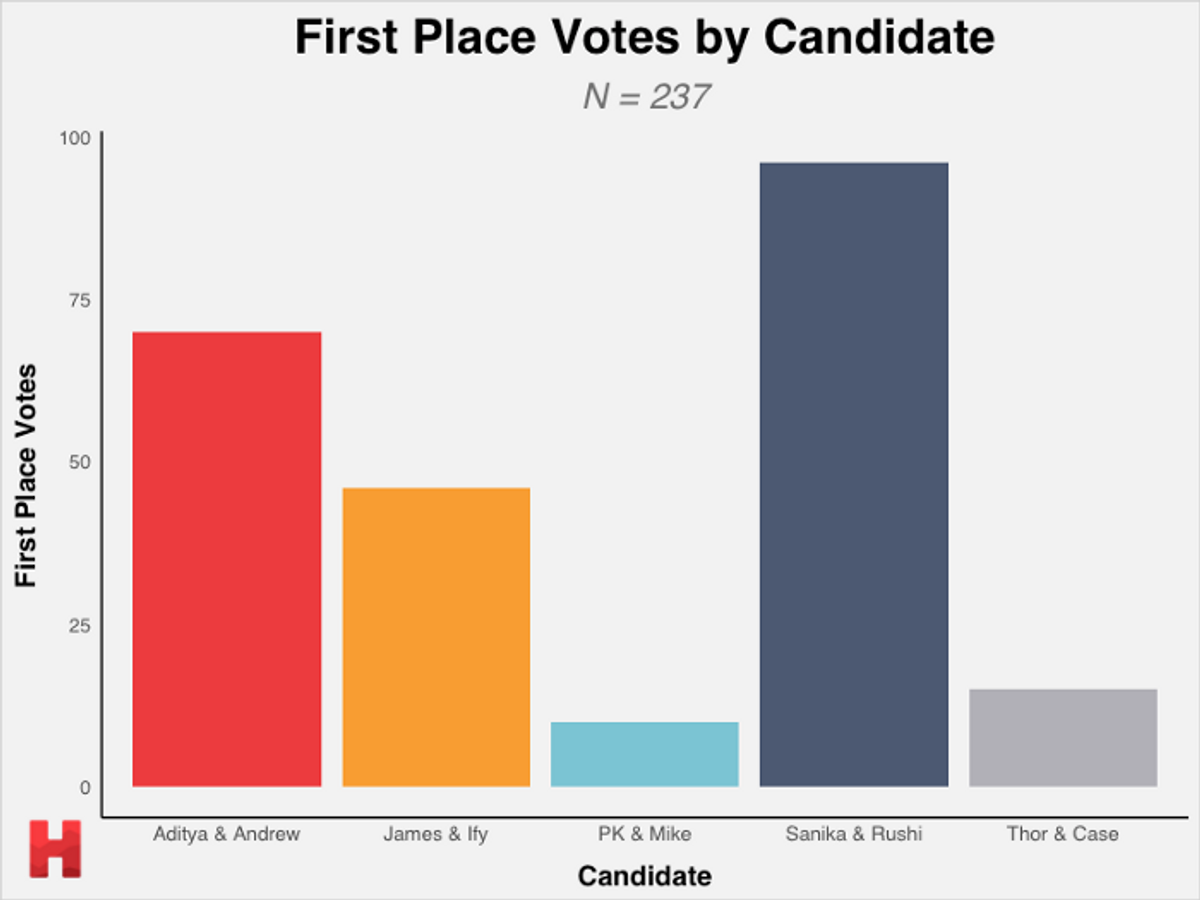 If our poll were perfect, then Sanika and Rushi would be the clear winners, followed by Aditya and Andrew, James and Ify, Thor and Case, and PK and Mike, in that order. We also examined results by class year. Among our respondents, 24% were freshmen, 26% were sophomores, 33% were juniors, and 17% were seniors. This goes against the conventional wisdom that freshmen are most likely to vote, and it is possible that they are underrepresented in our sample. Notably, as most candidates are juniors and there is strong competition this year, juniors are likely to vote as they are more likely to know the candidates. However, previous UC presidential election turnout statistics by year have not been released, so we cannot confirm the representativeness of our poll. 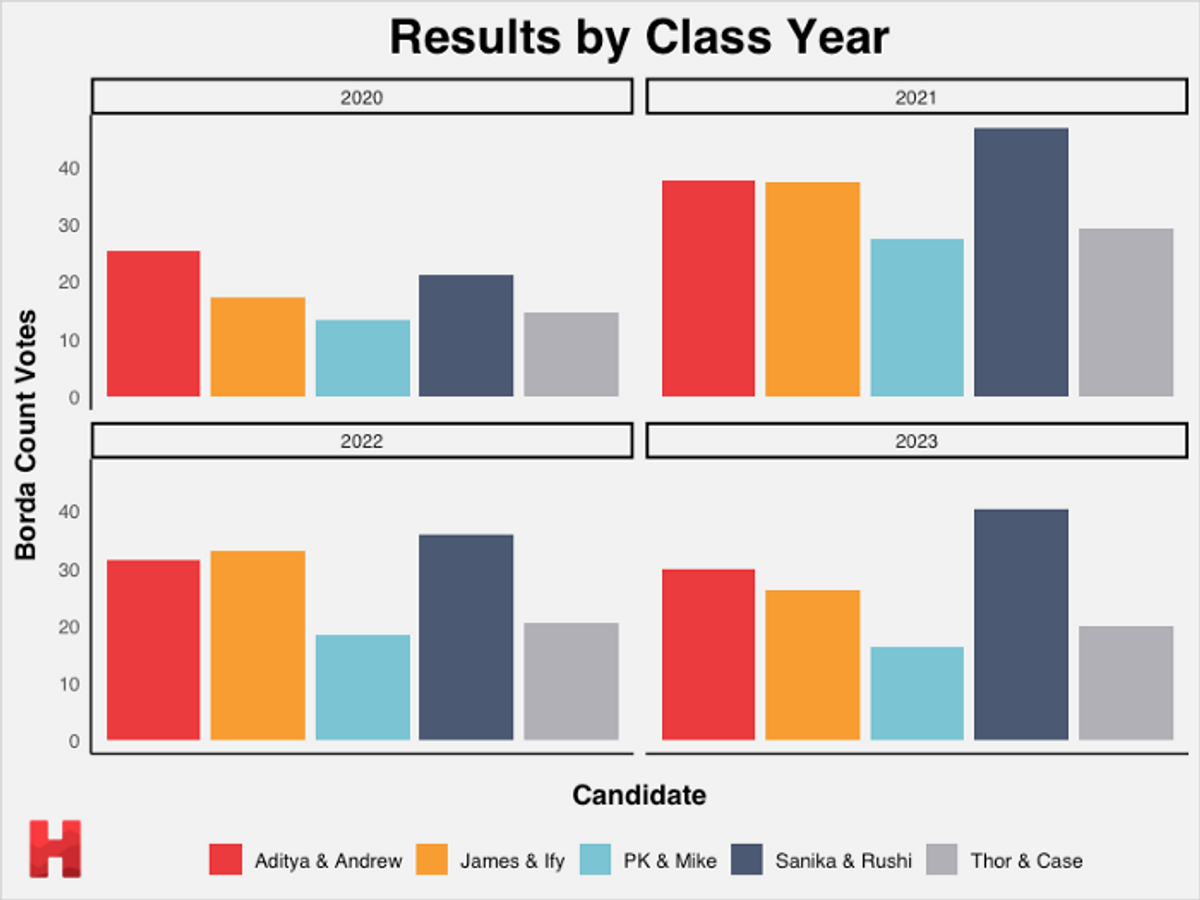 Because our poll was open for a week, we also examined how votes changed over time, since any given campaign could have gained traction during the course of our survey. Aditya and Andrew appear to have gained some support relative to the other tickets since the date the poll opened, but the ordering of tickets has remained relatively constant. 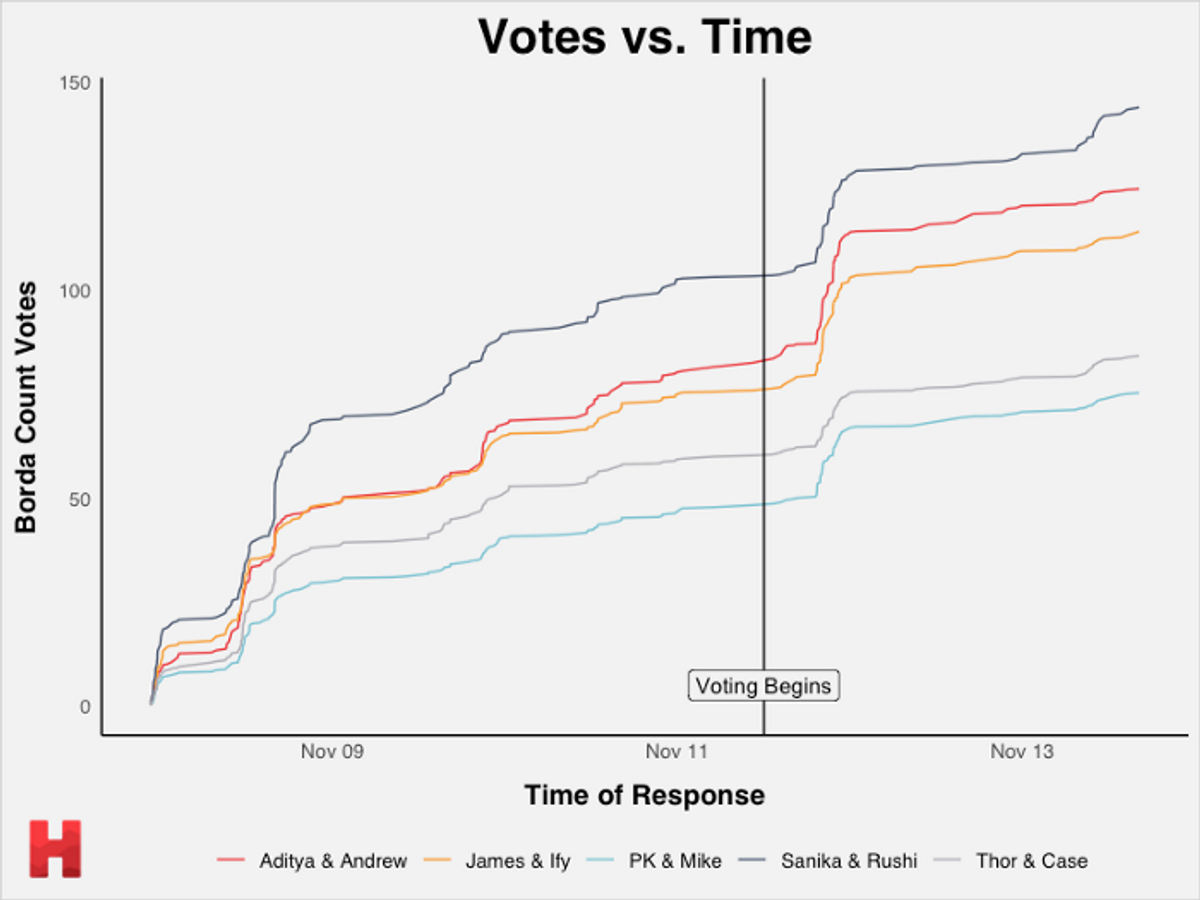 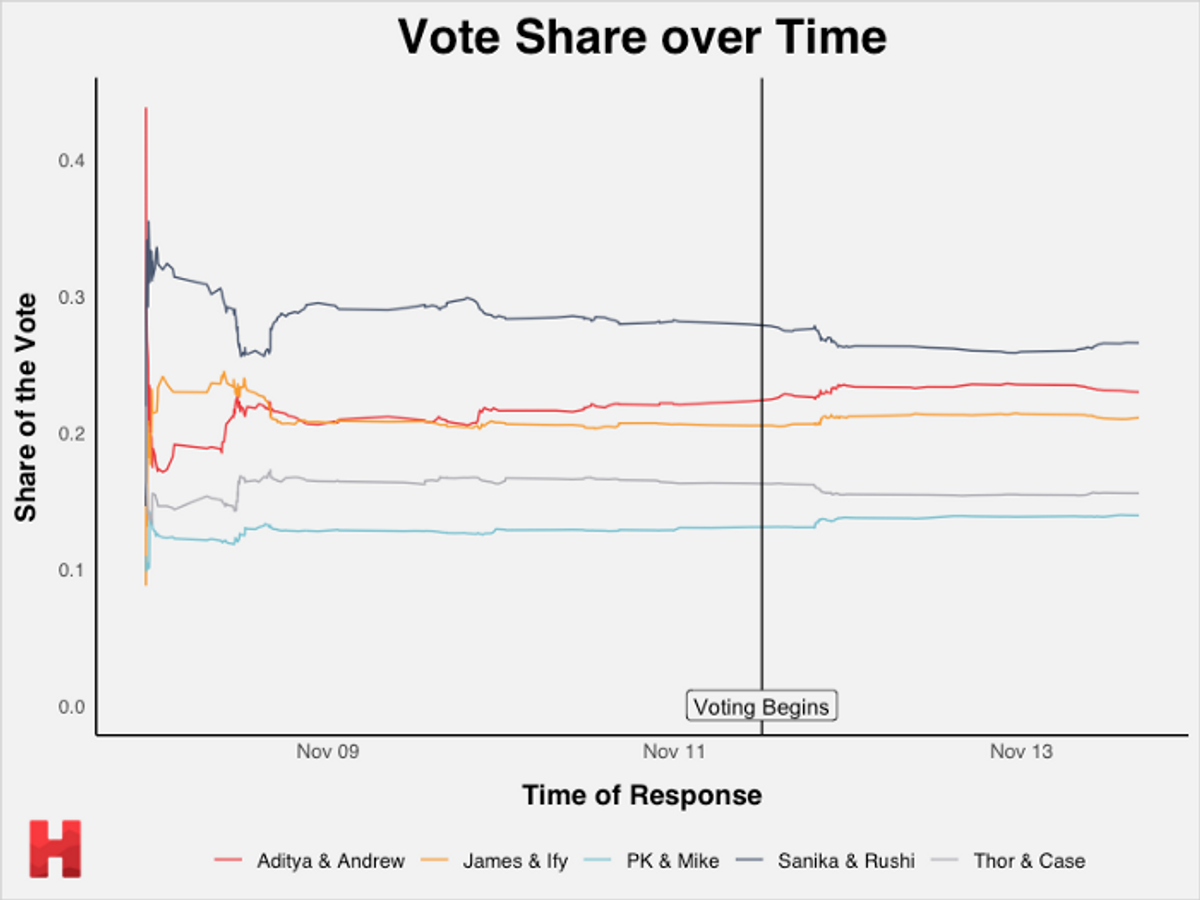 We anticipate that to the degree that this race is competitive at all, it will be a three-candidate race. PK and Mike and Thor and Case are highly unlikely to win the race. Together, they composed approximately 54% of all 4th and 5th place ranks, so in order for either of them to win, our poll would need to be astronomically wrong.

The Probability of an Upset?

To check the robustness of our predictions, we ran tests to see what would happen if voters for Andrew and Aditya, or James and Ify, were a higher proportion of the voting population than they were in our sample. We show below the probabilities of winning for each if the true populations are x% higher than in our sample. For example, Andrew and Aditya have 29.5% first choice support in our poll, but we can predict that if their proportion in the population was 10% higher, so if it was at 32.5%, then they would have a 6.8% chance of winning. Importantly, we run these robustness checks assuming that the distribution of other supporters is constant. 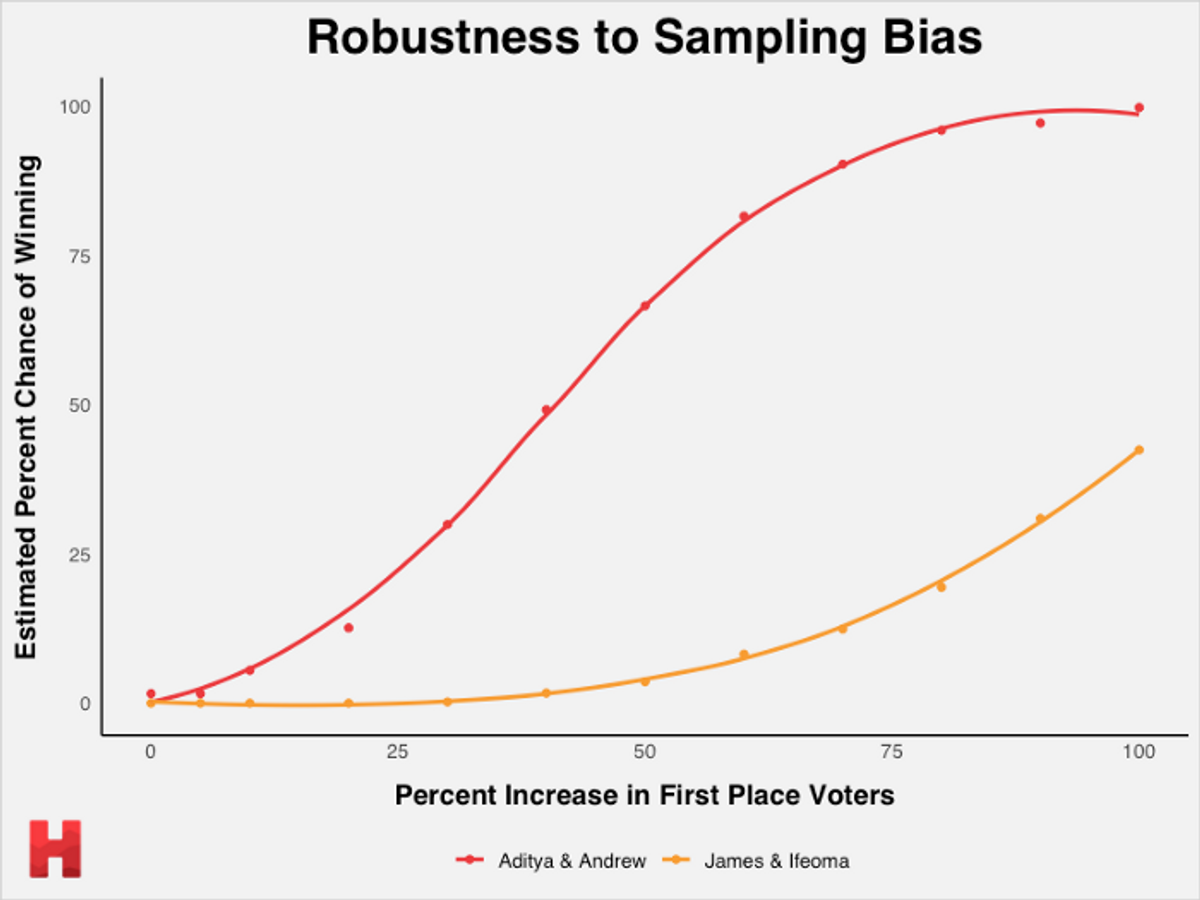 In order for Andrew and Aditya to have a greater than 50% chance of winning, we estimate that they would need their proportion of supporters in the population to be around 45% higher than in our sample. While we would consider this to be implausible, it may be possible depending on their get-out-the-vote effort.

James and Ify, however, have a bigger challenge. In order for them to have a greater than 50% chance of winning, they would need 110% more supporters among students than in our sample. We believe the only way this is possible for James and Ify is if their recent internet popularity drastically increases their popularity on campus. However, we think that the viral nature of their video will have limited impact on voting, which had already started by the time the video went viral and which may not correspond to increased support among Harvard students. Especially since James and Ify are more traditional UC candidates, both with some form of experience on the UC, we find it unlikely that they would have a base of support that is voting for them but not filling out our survey.

This is one of the more uncertain predictions we’ve done due to the unique nature of this year’s election. Nonetheless, based on the data, we predict that Sanika and Rushi will be the next President and Vice President of the Harvard Undergraduate Council and that the order of results will most likely be:

Voting closes at noon today, and the results will be released this evening. Best of luck to all the candidates!

Predicting the 2018 UC Presidential Election Winners
Our UC prediction got dunked on. Here’s why.