Where Are Harvard’s Female Professors?

Across all Harvard tenured faculty, three times as many are male as female.

Last fall, the Harvard Open Data Project, a student-faculty group that aims to increase transparency on campus using public Harvard data, published an article (https://medium.com/harvard-open-data-project/gender-disparity-in-harvard-faculty-b253ae949a56) on gender disparity within the Faculty of Arts and Sciences at Harvard. In the investigation, Emma Ling ’20 revealed several disconcerting trends regarding gender disparity, including a wider gender gap within higher-ranked faculty than among lower-ranking positions and notable imbalances across various fields. The results motivated an initiative to analyze gender disparity at Harvard in comparison to other top universities across the United States with the goal of digging even deeper into the issue, specifically with regard to faculty rank. Rank is one of many factors that influences gender disparity among faculty, but it often seems to be underestimated in administrative efforts to combat this disparity. Thus, the findings serve as a call to action not only for Harvard but also for other top universities to pursue gender equality in faculty with special attention to high-ranking positions.

The basis of the study included published data on faculty diversity from several of the top universities in America: Brown, Columbia, Cornell, Dartmouth, Harvard, MIT, Princeton, Stanford, the University of Pennsylvania, and Yale. This information mostly came in the form of annual faculty reports, as well as some of the data published in Common Data Set reports (https://oir.harvard.edu/common-data-set), which are standardized across all American universities.

The term “tenured faculty” is used synonymously with full professors, and “tenure-track” faculty refers to assistant and associate professors. The categories of male and female are based on categories within university-specific datasets and Common Data Set reports. Clearly, this gender classification poses a serious limitation to the data, leaving out faculty who identify as non-binary. Even in the most recent datasets from 2017 through 2018, the gender of the faculty is only categorized within this binary. Therefore, the following trends are limited by incomplete data in this regard, highlighting the need for future data collection methods that better capture the full diversity of the faculty. 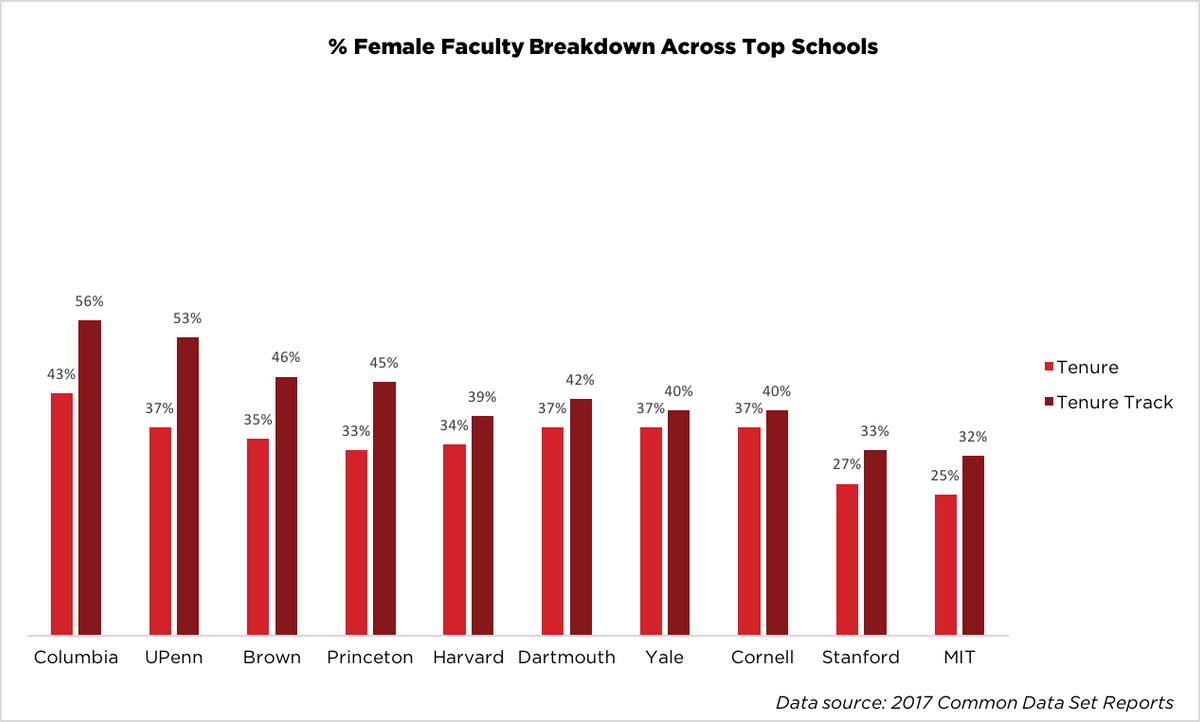 Looking at the overall gender gap in faculty might be misleading, because the gap is significantly worse for full-time faculty than for part-time faculty.

The next section of the study looks at the gender breakdown in various faculty ranks within select top American universities. Investigating this topic also underscored the dearth of faculty-related data provided by most of these universities and the difficulty of accessing them. Only Columbia, Brown, Princeton, and Stanford offered enough consistent data for comparison.

At Columbia, a huge gender disparity is seen in the subset of faculty who have tenure or “Tenure of Title,” with male faculty dominating at 73 percent and 89 percent, respectively. The disparity persists to a lesser extent among faculty who are “Eligible for Tenure.” Although male faculty still have the majority, the gender gap is significantly narrower than the former two categories. The only category in which female faculty hold the higher proportion (a slight margin of 53 percent) is “Non-Eligible for Tenure.” 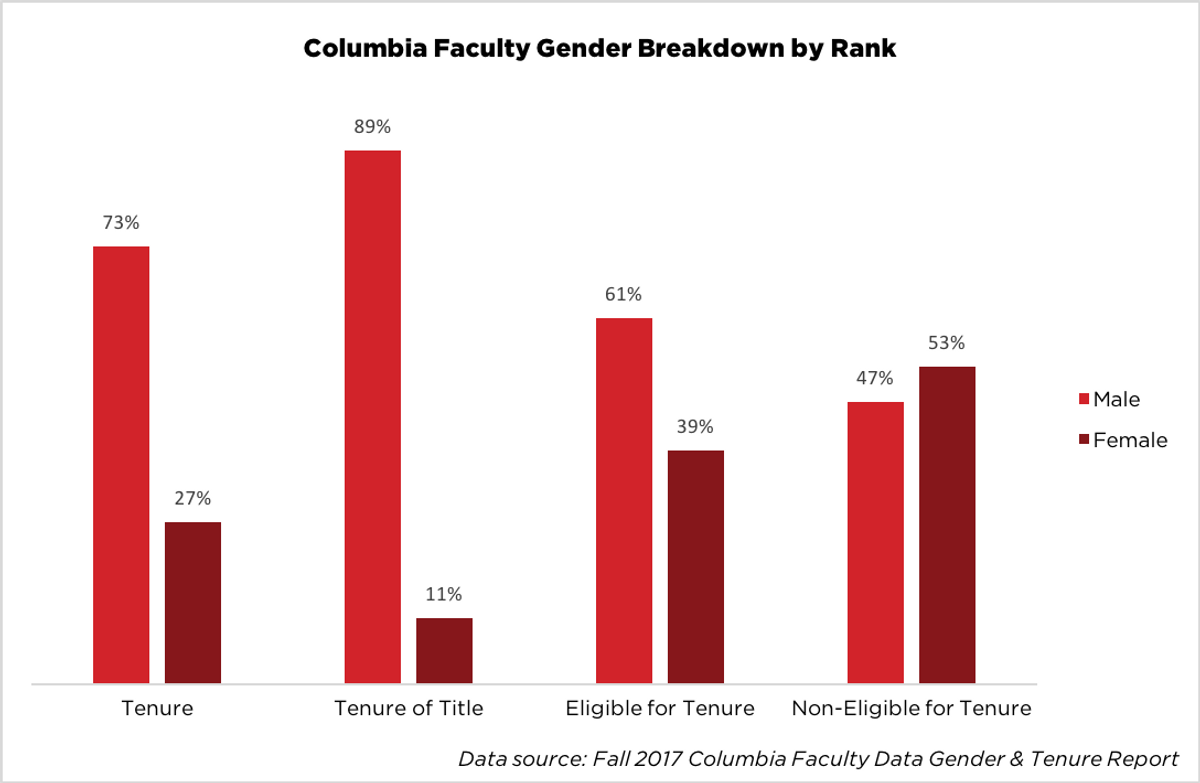 At Brown, male faculty dominate 60 percent, 66 percent, and 75 percent of its Assistant Professors, Associate Professors, and Full Professors, respectively. This statistic may seem like just another testament to gender imbalance among university faculty at large. However, an important characteristic of this disparity is that the higher the rank, the greater the difference between male and female faculty proportions. 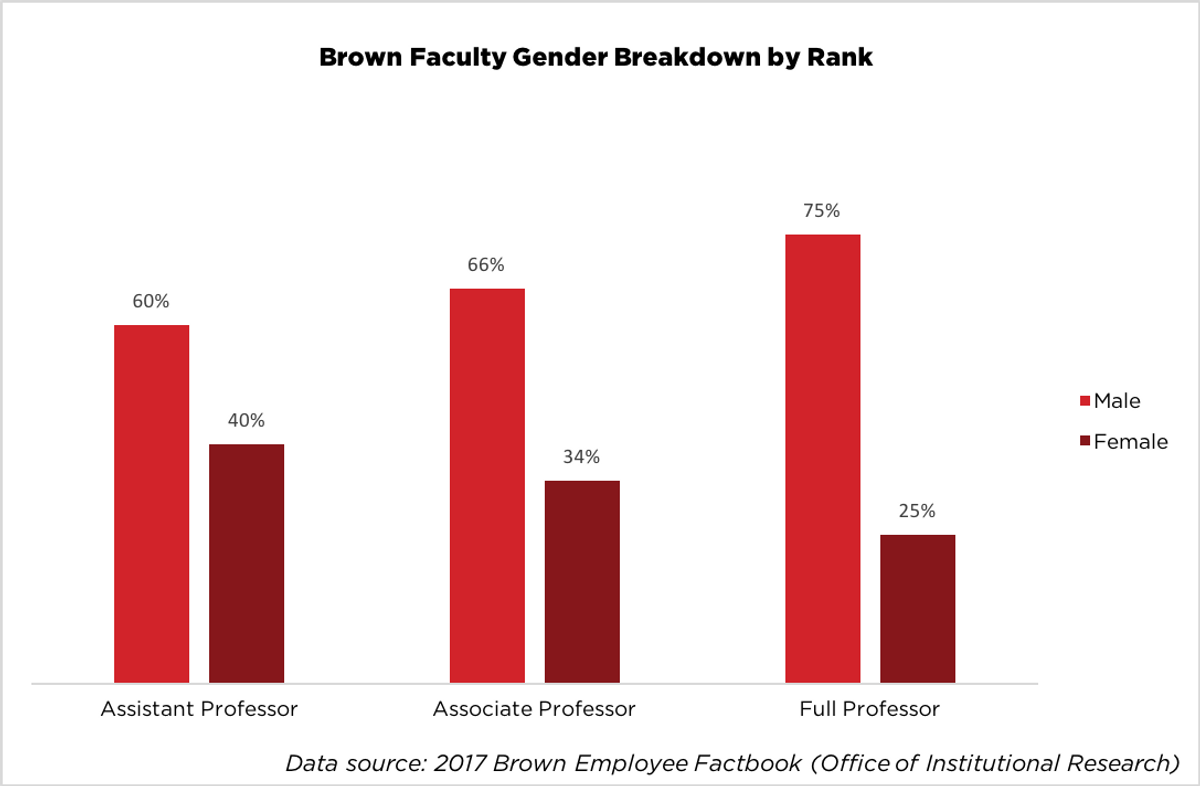 The higher the rank, the greater the difference in proportion between male and female faculty, with male faculty always holding the higher proportion. 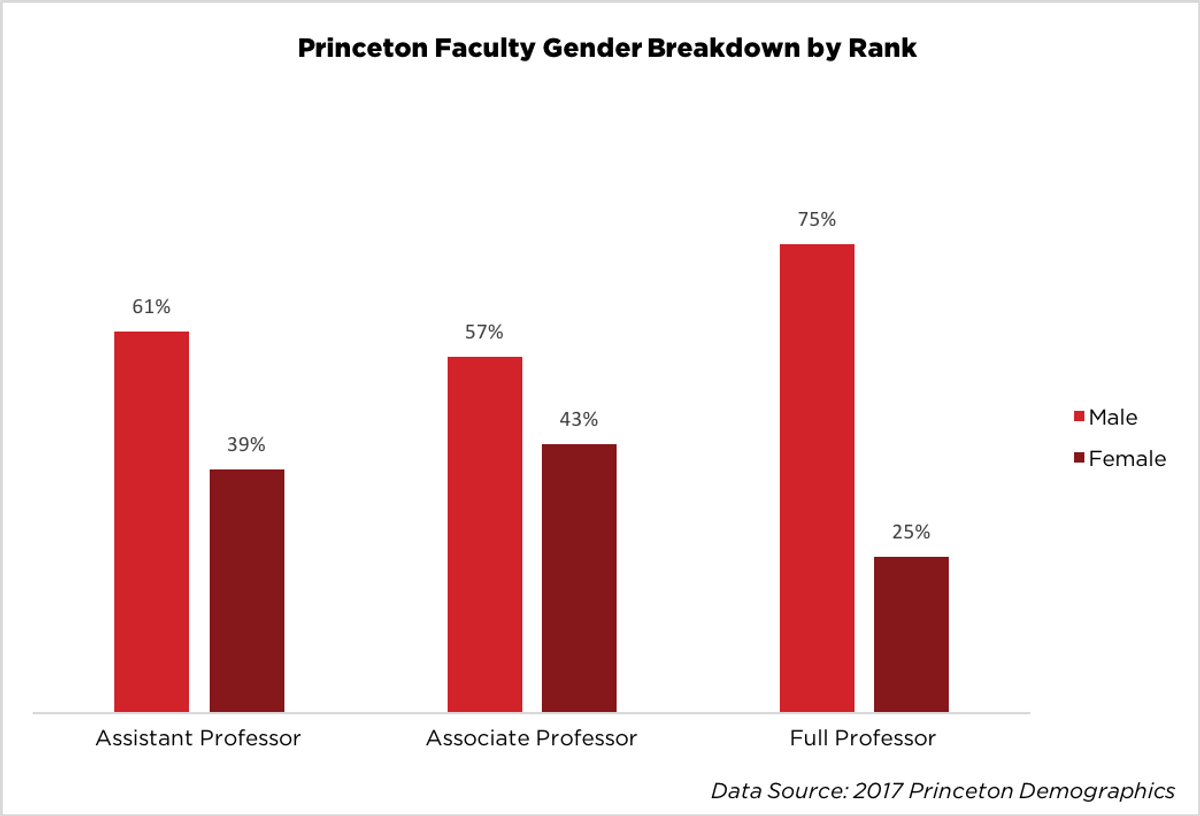 At Stanford, male faculty hold 77 percent of tenured positions and 63 percent of “Tenure Track” positions. Male faculty also dominate in Assistant Professor, Associate Professor, and Full Professor roles. Thus, all four of the aforementioned top schools show not only a consistent gender disparity in faculty, but also one that worsens as rank increases. 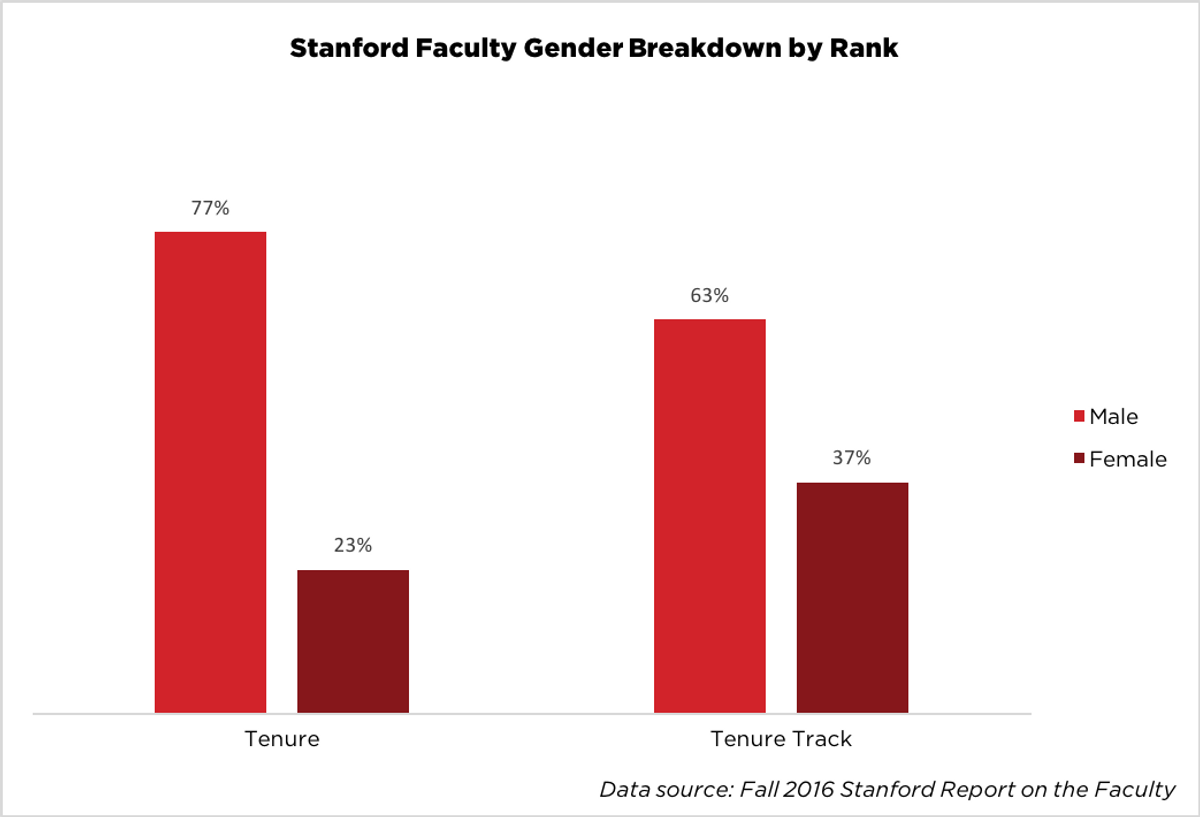 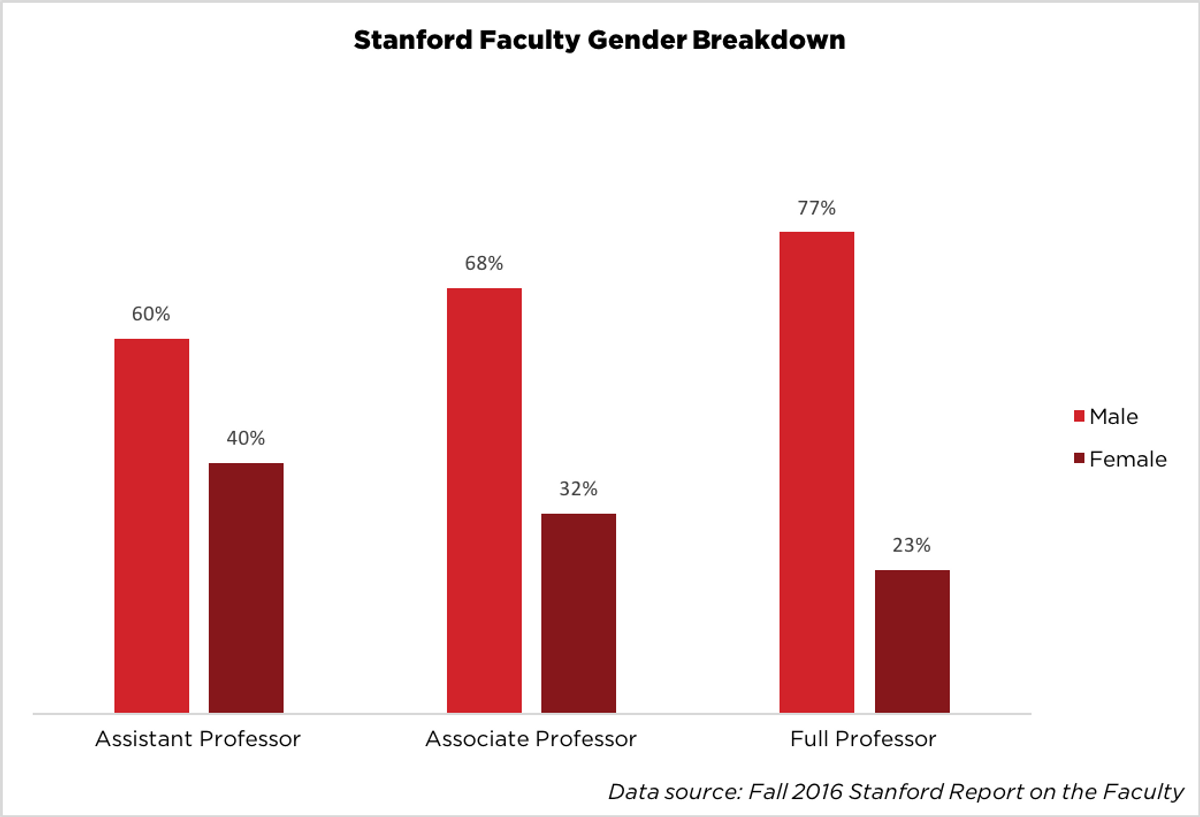 A closer look at gender disparity within Harvard faculty

Finally, the study delves deeper into Harvard, looking at the faculty gender breakdown within the undergraduate versus graduate schools as well as within their different departments. As shown in the chart below, the proportions of male and female faculty are very similar for FAS and professional graduate schools. Across all Harvard tenured faculty, there are three times as many males as females. The male-female ratio for tenure-track faculty is somewhat lower at about three-fifths being male, as opposed to three-fourths. 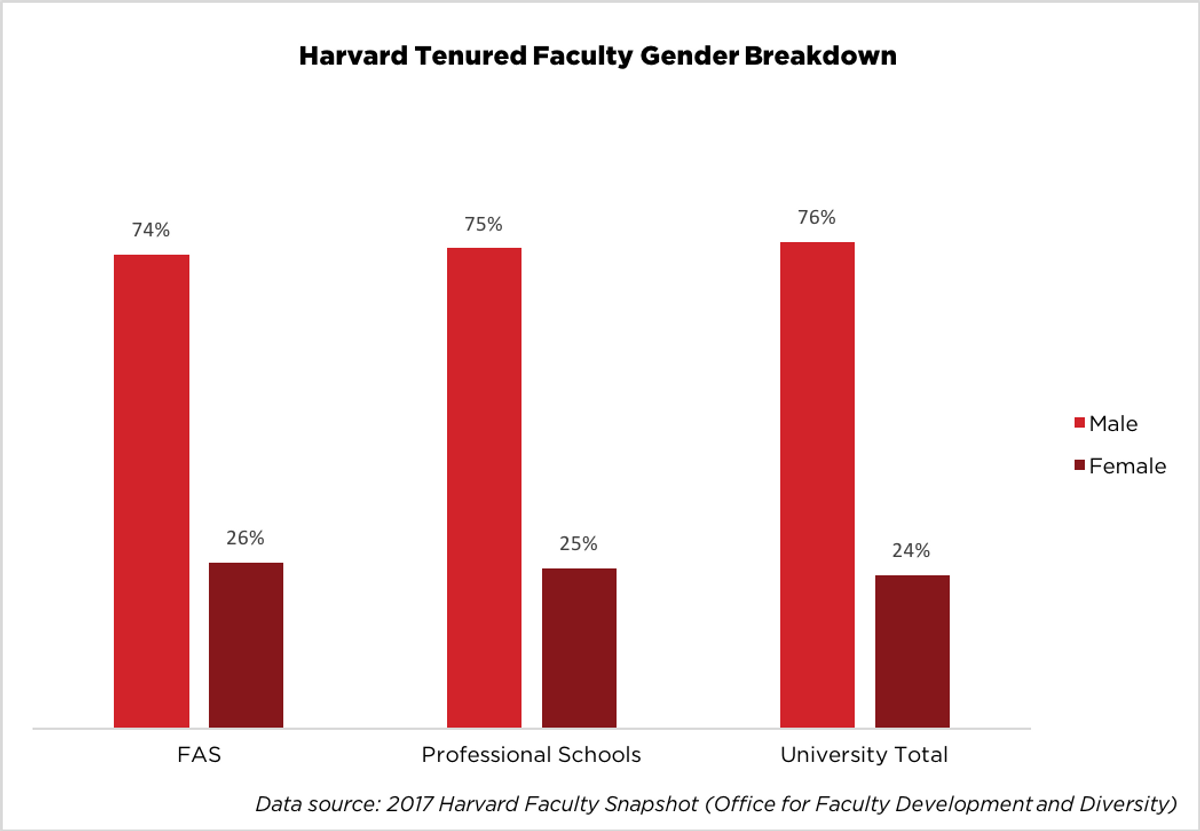 Across all Harvard tenured faculty, three times as many are male as female. 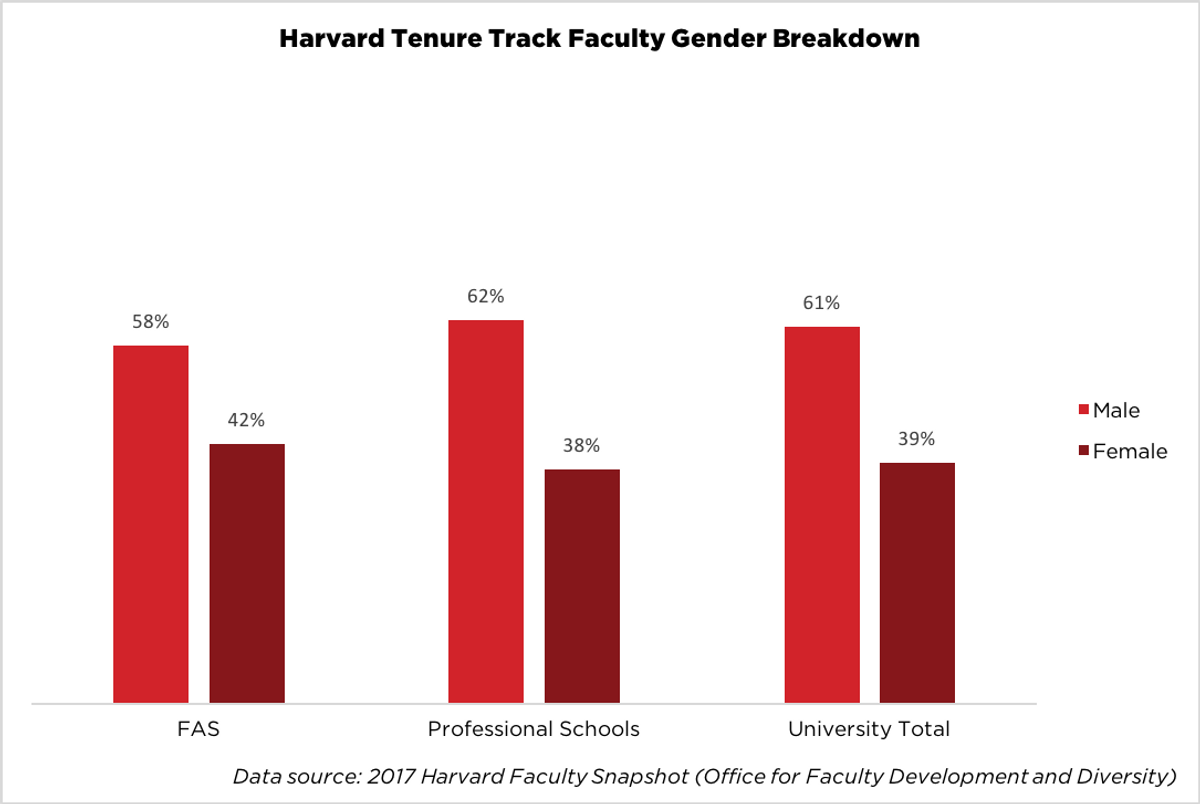 It is also noteworthy that the gender disparity is worse within Sciences and Engineering departments than Arts and Humanities departments, as revealed in a previous HODP investigation (https://medium.com/harvard-open-data-project/gender-disparity-in-harvard-faculty-b253ae949a56). Among tenured and tenure-track faculty at FAS, Engineering consistently shows the lowest percentages of female faculty, while the highest percentages of female faculty are in Arts and Humanities. 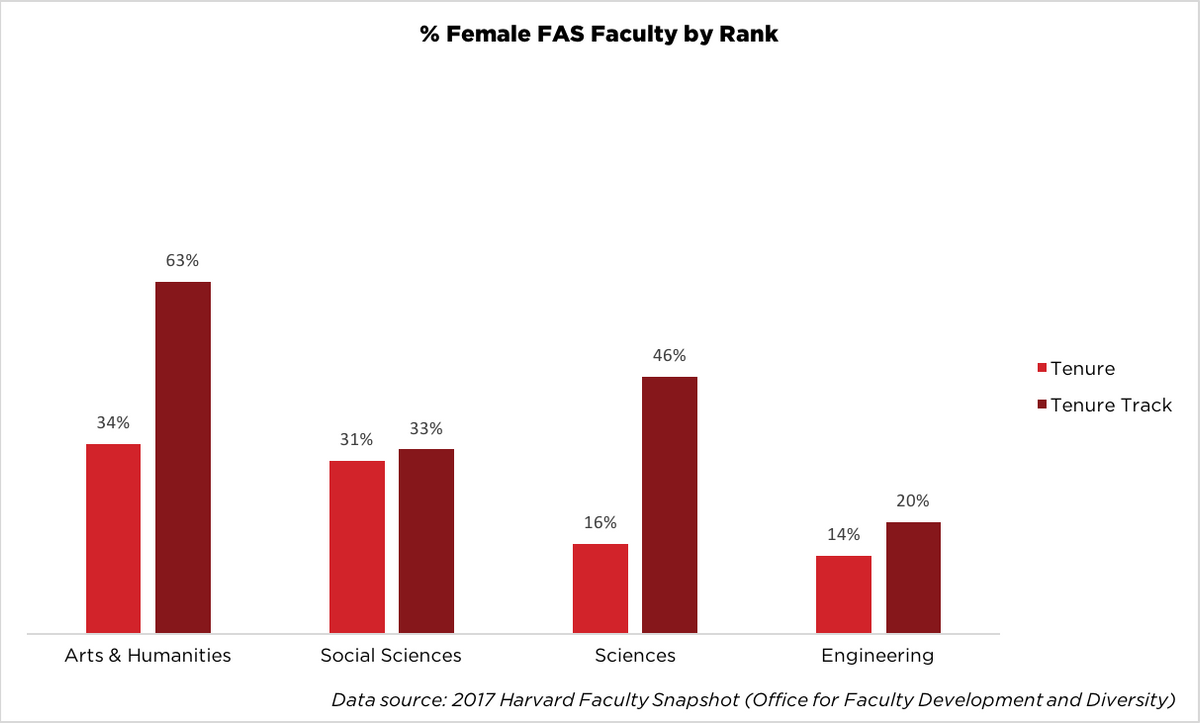 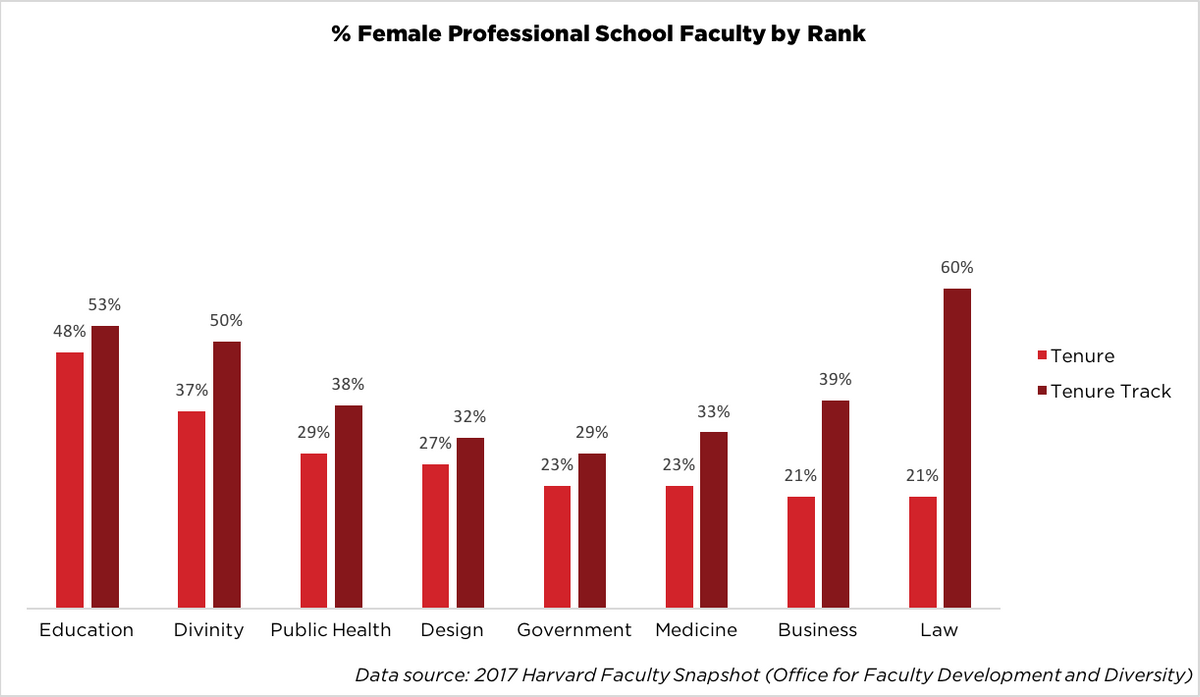 Overall, each of the schools exhibits a strikingly similar disparity in the percentage of female tenured faculty and tenure-track faculty. FAS averages 24 percent and 41 percent, respectively, while the professional schools average 29 percent and 42 percent, respectively. In the process of going from tenure-track to tenured, the percentage of female faculty drops by almost half.

“In going from tenure-track to tenured, the percentage of female faculty drops by almost half.”

Hope for closing the gender gap with incoming faculty

On a more positive note, the efforts to increase female representation in faculty seem to be moving in a positive direction. In the charts below, Associate Professorship corresponds to promotion while still in a tenure track position and Ladder Faculty corresponds to receiving full tenure. The percentages of male and female candidates for associate professorship are almost on par not only in standing for review, but also in successful promotions. For Associate Professorship in particular, the proportions of male and female faculty members who receive the promotion are close to equal, and this pattern will likely continue. 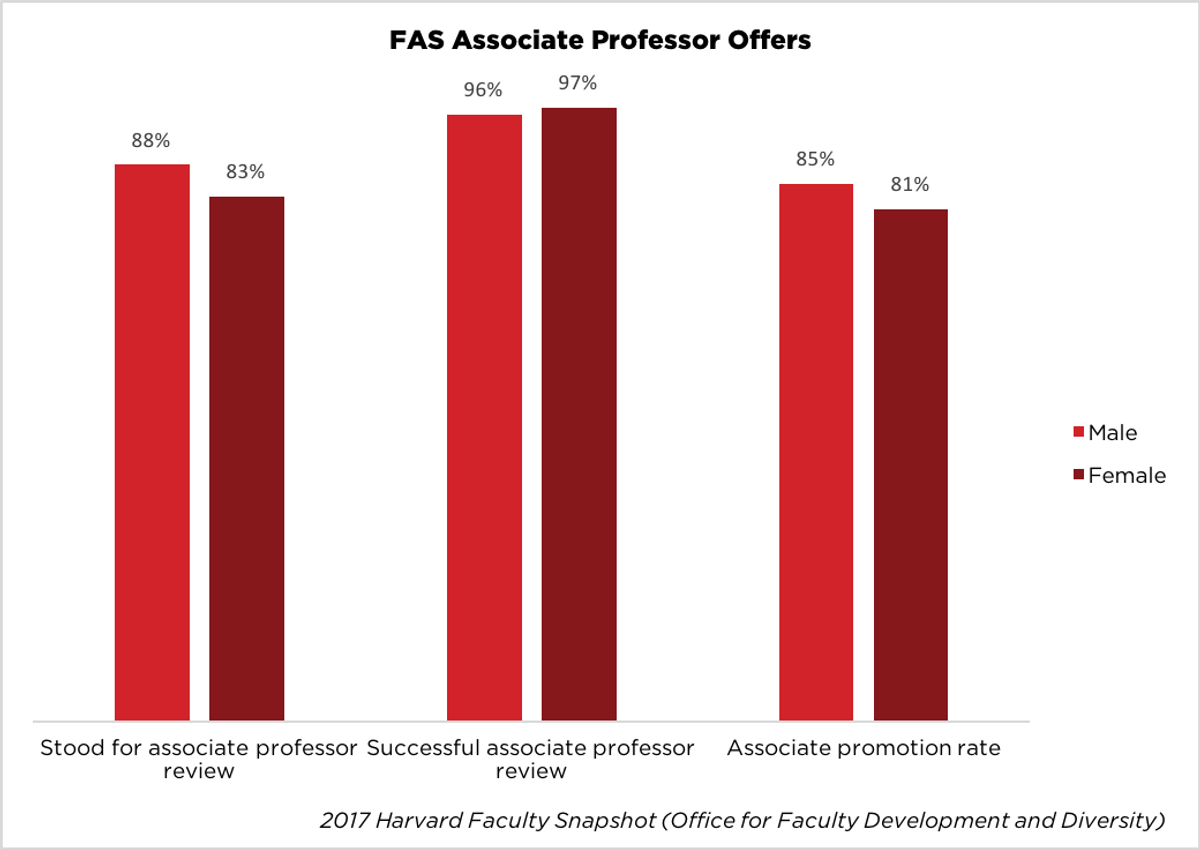 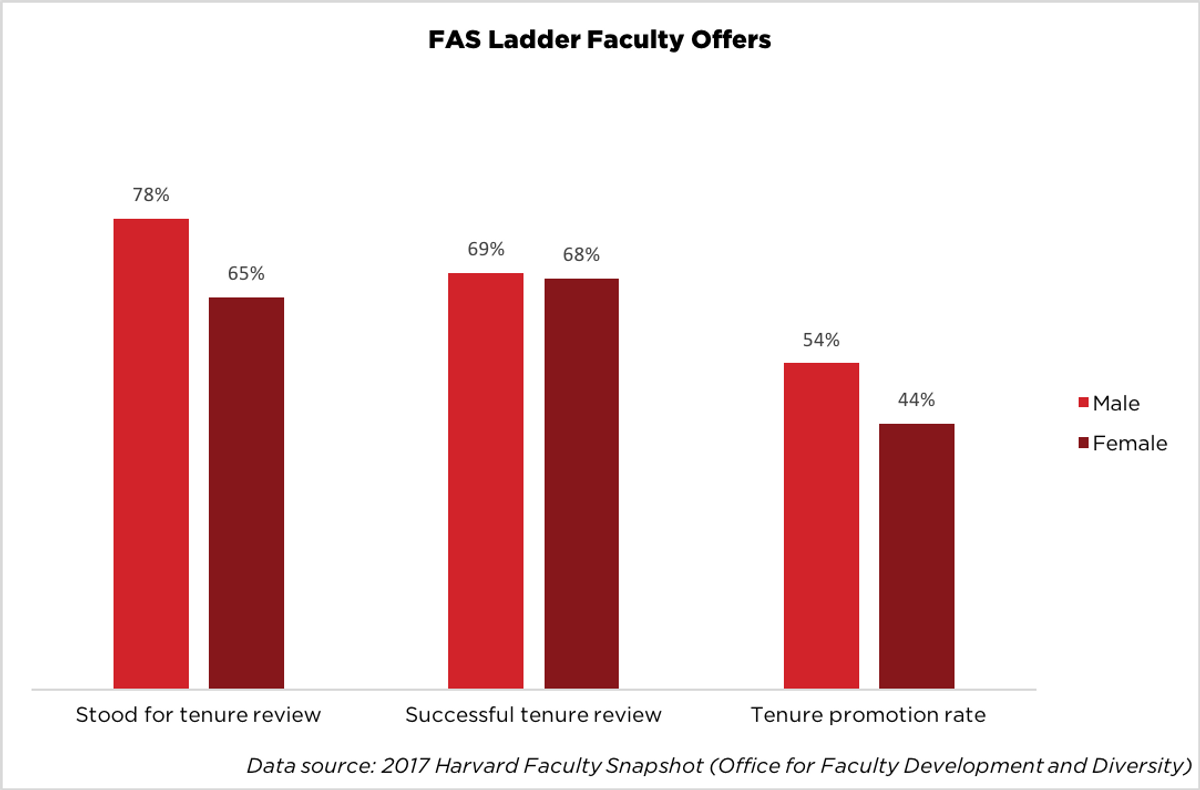 Gender disparity must be considered in context of rank

At Harvard, both within FAS and the professional schools, there is not only a significant gender gap in faculty but also a gap that widens as rank increases. Hence, simply assessing the total number of male faculty members versus female faculty members might give the wrong impression that these proportions are common across all positions, tenured or tenure-track.

Whereas males dominate the faculty at top American universities, an important aspect of this gender imbalance is that there is even less female representation in the higher-up faculty ranks. Universities need to be mindful of this distinction during both recruiting and promotion in order to prevent female faculty from being crowded out of senior positions. Moreover, it is worrisome that only Brown, Columbia, Penn, Stanford, and Harvard publish sufficient, easily accessible data for this study among the ten top schools of interest, preventing a more comprehensive analysis of the male-female ratio in tenured and tenure-track faculty. Such lack of data suggests a lack of transparency at top American universities regarding faculty diversity; in fact, the Common Dataset, which universities are legally required to publish was the only data that was common to all the listed schools. Ultimately, future attempts to strive for gender balance in faculty must come hand-in-hand with, or even be fueled by, more publicly available knowledge about the gender demographics of university faculty.

Gender Disparity in Harvard Faculty
How Diverse are Harvard Employees? A Study of Gender and Race