The Data Is In: Here’s Who Will Win the UC Presidential Election

A data-driven prediction of Harvard’s 2017 contest for student body president.

In the fall of 2016, the Harvard Open Data Project ran the first ever data-driven prediction of a UC presidential election, and correctly predicted the order of the four tickets. We’re hoping to repeat that feat this year. In this article, we’ll look at what polling, social media, endorsements, and fundamentals can tell us about this year’s election. In an article published last week, HODP found that Zhang and Boucher may have a small structural advantage going into the race, given historical trends in candidates’ houses, previous UC experience, and year in school.

So, what do our stats say about who will win? Let’s dive in.

Early this week, HODP conducted a relatively unscientific poll of all Harvard undergraduates. The poll asked two questions: a respondent’s year in school, and who they intended to vote for. Due to limited resources and a desire not to distort incentives, we did not provide any reward for filling out the survey. Still, we received 373 respondents, and we operated under the assumption that the type of people who are likely to vote in the UC election (which tends to have very low voter turnout) are also the type of people who are likely to fill out a survey without an incentive. 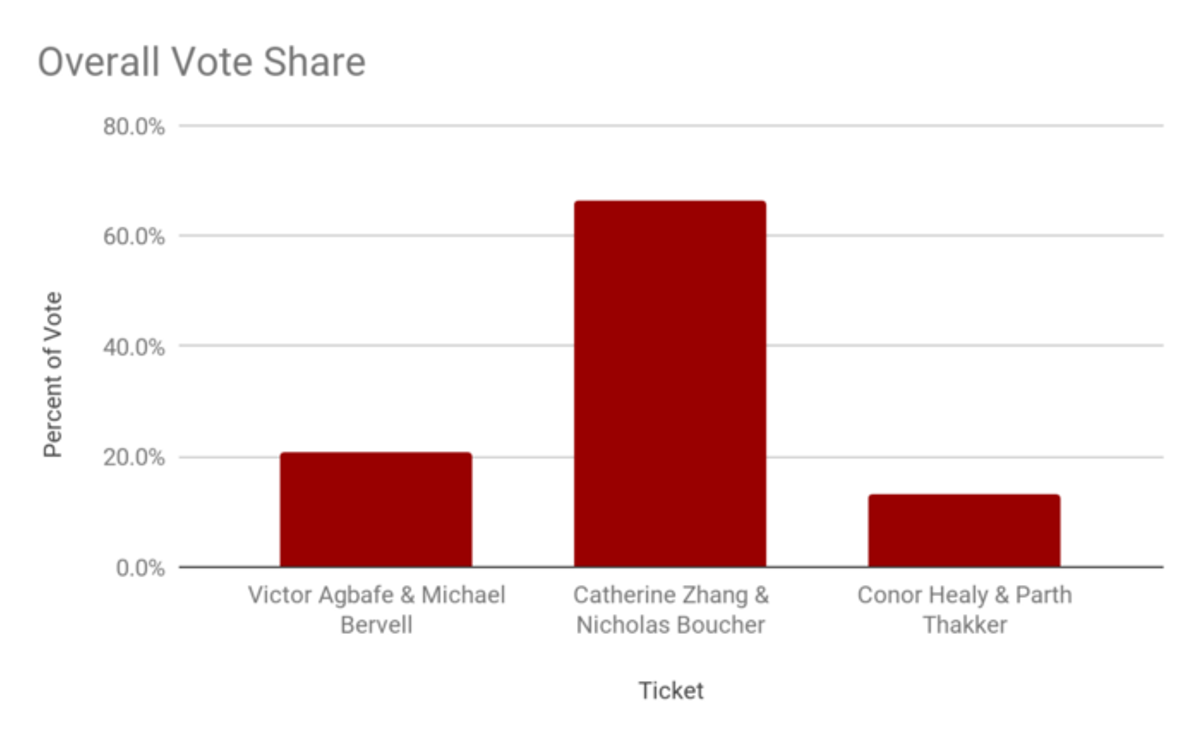 Zhang and Boucher enjoy a 45% lead in HODP’s poll over their closest competitors, Agbafe and Bervell.

Overall, we found that Zhang and Boucher enjoy a significant lead over the other two tickets in the polls.

In addition, Zhang and Boucher hold a noticeable lead over the other candidates among all four class years at Harvard, as seen below. HODP has found that freshmen tend to turn out at higher rates than other classes in UC general elections, and we believe this trend will hold in the presidential elections as well (although the official presidential election results do not break out votes by year). 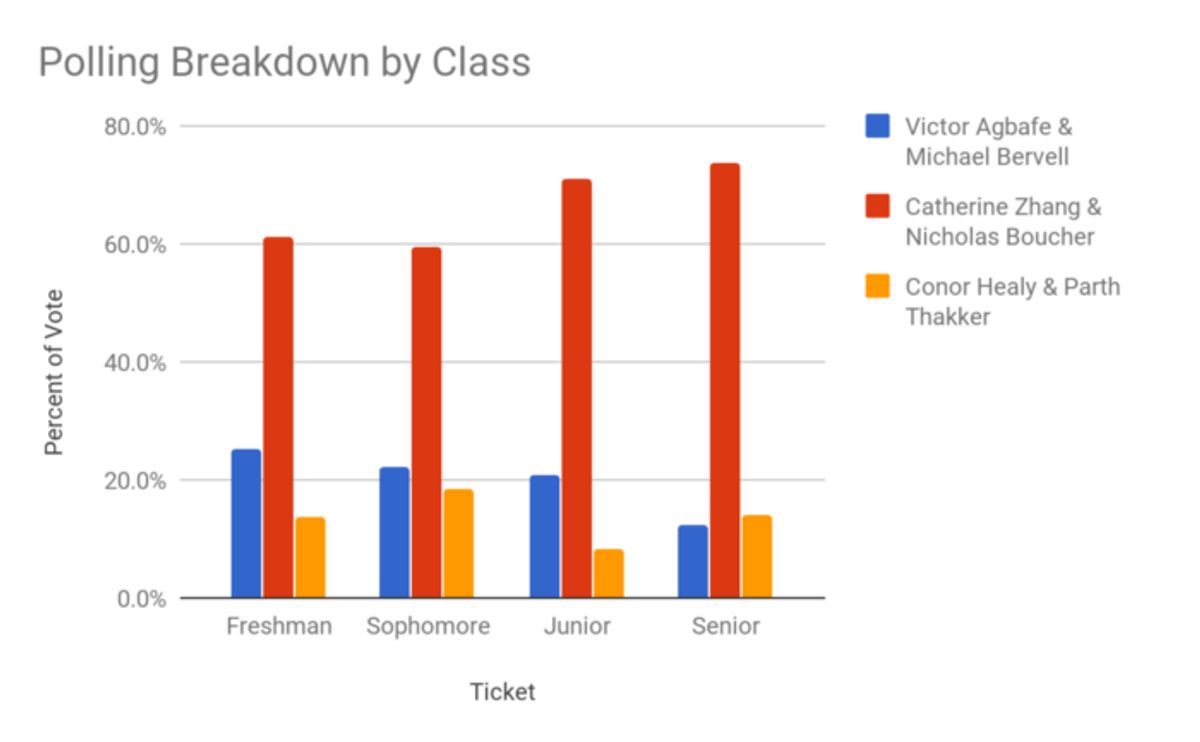 Zhang and Boucher dominate every class year, but they have stronger results among older students.

Outreach and name recognition are crucial components to winning a campaign. HODP has found that a solid social media presence was correlated with more votes in last year’s UC Presidential election. This year, in several different measures, Zhang and Boucher lead the pack in their social media presence. As seen below, in total page likes, Zhang and Boucher had the most, followed by Agbafe and Bervell, with Healy and Thakker rounding out the pack. 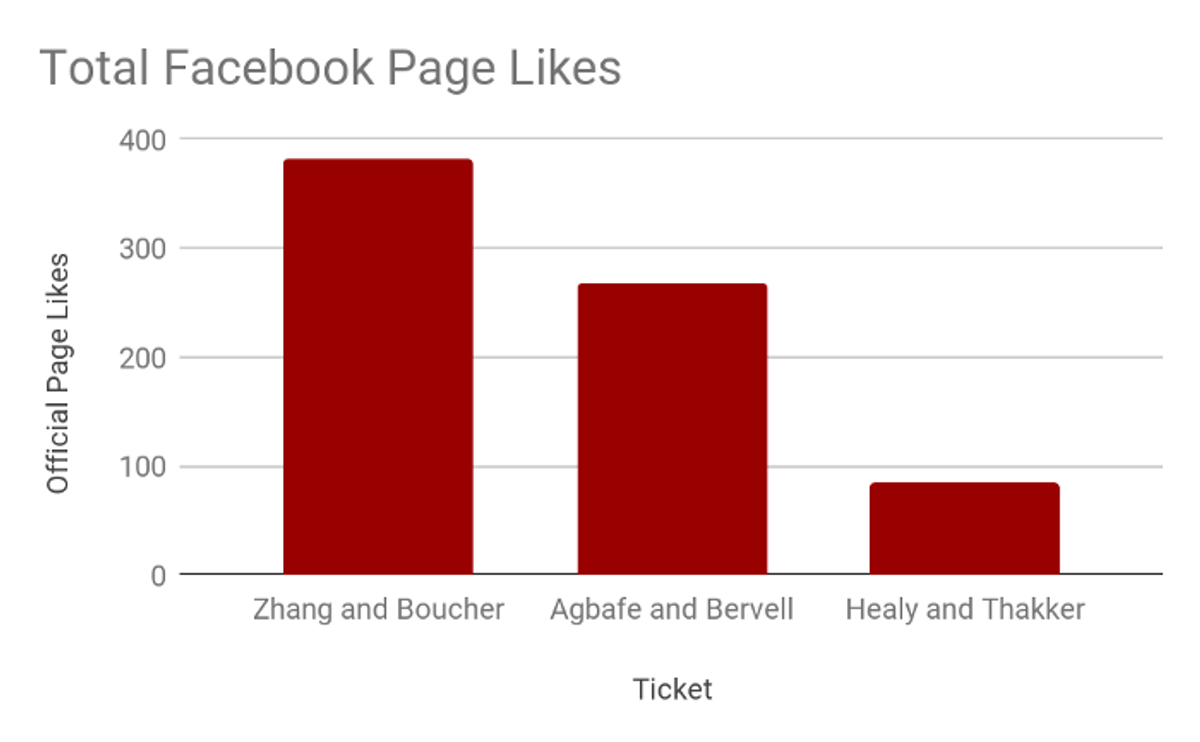 Zhang and Boucher have a slight advantage in total official page likes.

In addition, many Harvard students will change their profile pictures in support of the candidates. We took the sum of all of the likes on supporting profile pictures, counted the number of students who posted in support of a ticket, and calculated the median number of likes per supporting post on Facebook. On all three measures of social media presence, Zhang and Boucher blew away the competition, most significantly with their massive advantage in total likes, as seen below. In addition, on all three measures, the results were consistent with both total page likes and our earlier polls, with Zhang, Agbafe, and Healy in that order. 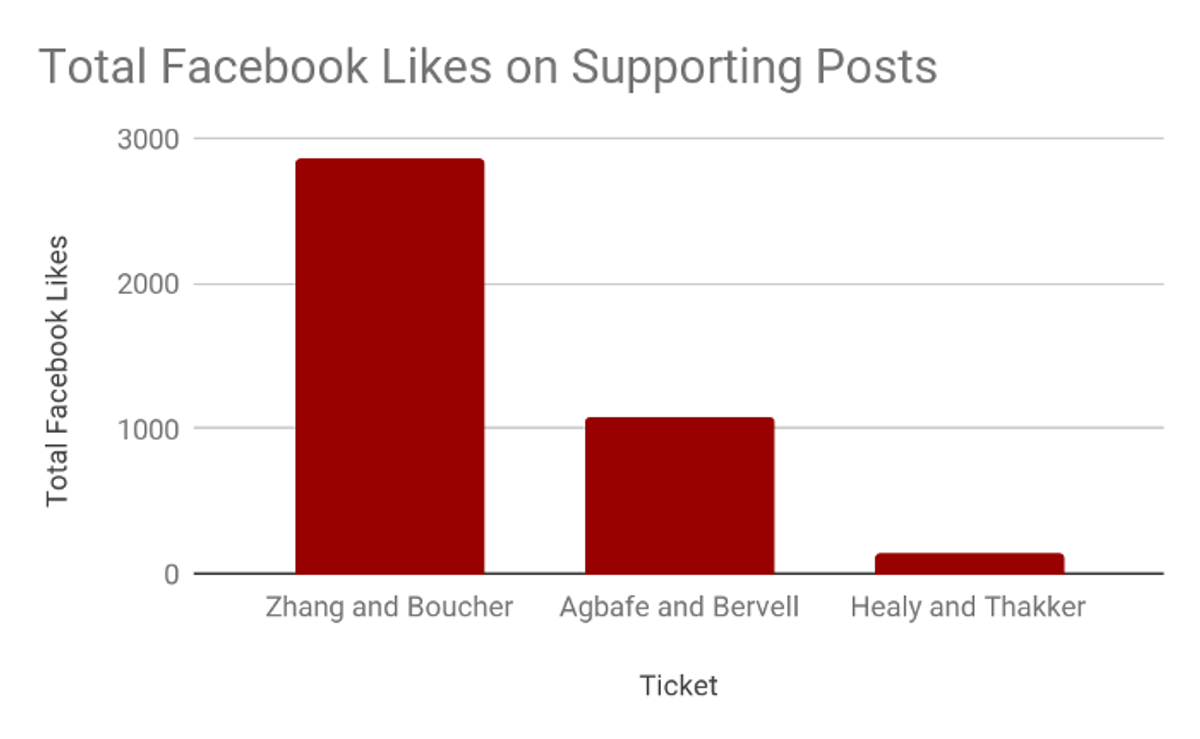 Zhang and Boucher enjoy a massive advantage in number of total likes on supporting posts. 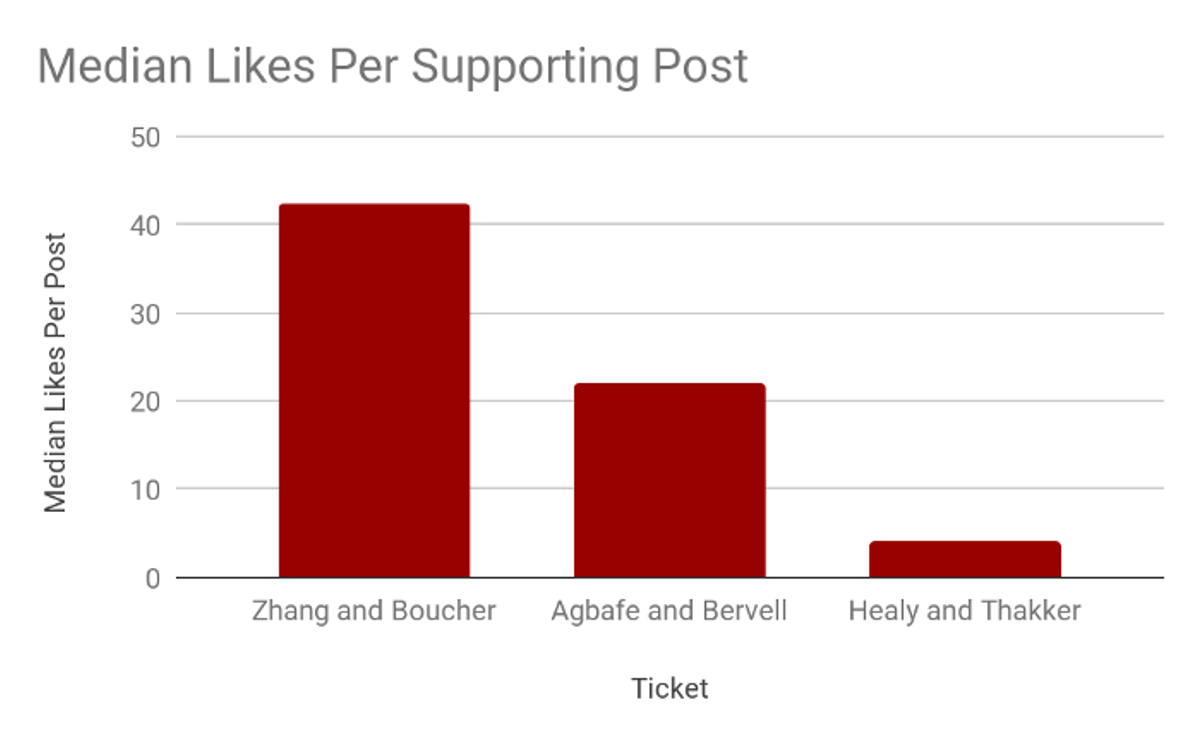 Potential Issues With These Metrics

Although the results above seem decisive, they only use Facebook data. Last year, the winning ticket of Yasmin Sachee and Cameron Khansarinia took advantage of other social media, including a significant investment in buying a Snapchat filter for their campaign. This year, it is plausible that we failed to measure some media presence on other services. For example, some students may have seen the Agbafe-Bervell ticket’s Tinder bot. 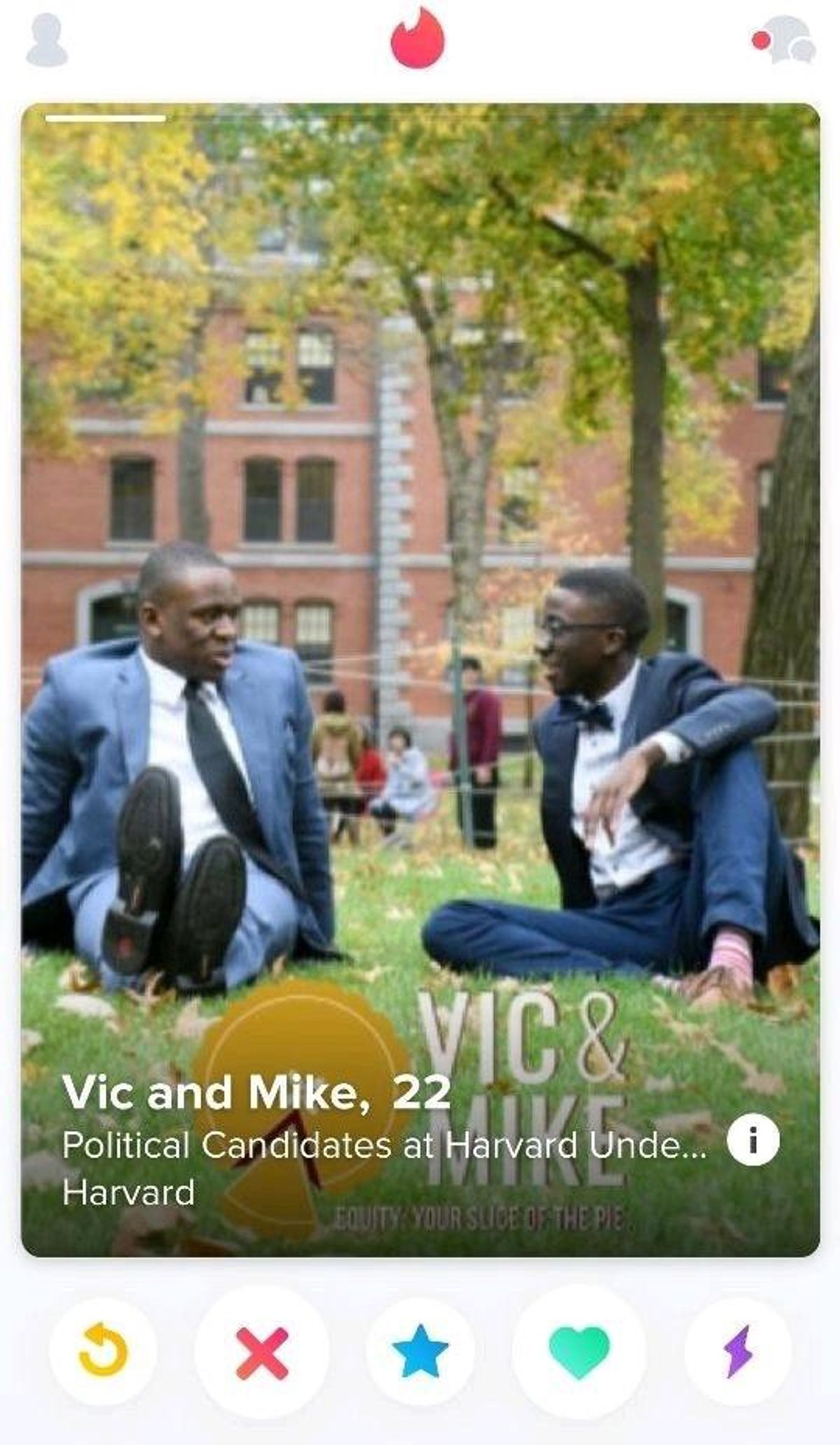 Agbafe and Bervell used Tinder to attract voters in this year’s campaign.

In addition to new media, we cannot rule out the possibility of “bubbles.” That means the possibility of relatively small groups of voters liking all of each other’s supporting posts, thus creating thousands of likes in support of a candidate with just a small number of people. Likes in themselves do not necessarily indicate full endorsements, but they are often indicative of support.

Finally, candidates may have solid name recognition offline, too. Healy is well-known on campus for his work with the Open Campus Initiative, a group that brings controversial speakers to campus in its efforts to push freedom of speech at Harvard. Government concentrators may know Agbafe as the co-star of Gov 30’s lecture videos, along with Professor Paul Peterson. While neither of these relate directly to campaigns, outside name recognition may help the candidates in this week’s election.

Endorsements Point to a Zhang-Boucher Win

In a postmortem of last year’s election, HODP found that the number of endorsements was generally not very correlated with victory. However, given this year’s significant disparity between the candidates, endorsements by UC representatives on Facebook are certainly worth mentioning.

At the time of writing, Zhang and Boucher had 23 endorsements from sitting UC representatives, Agbafe and Bervell had just 1, and Healy and Thakker had none. We excluded the candidates themselves from these counts. Not counting the candidates or current President and VP Sachee and Khansarinia (who are required to be officially neutral), 20 representatives did not endorse a candidate on Facebook. 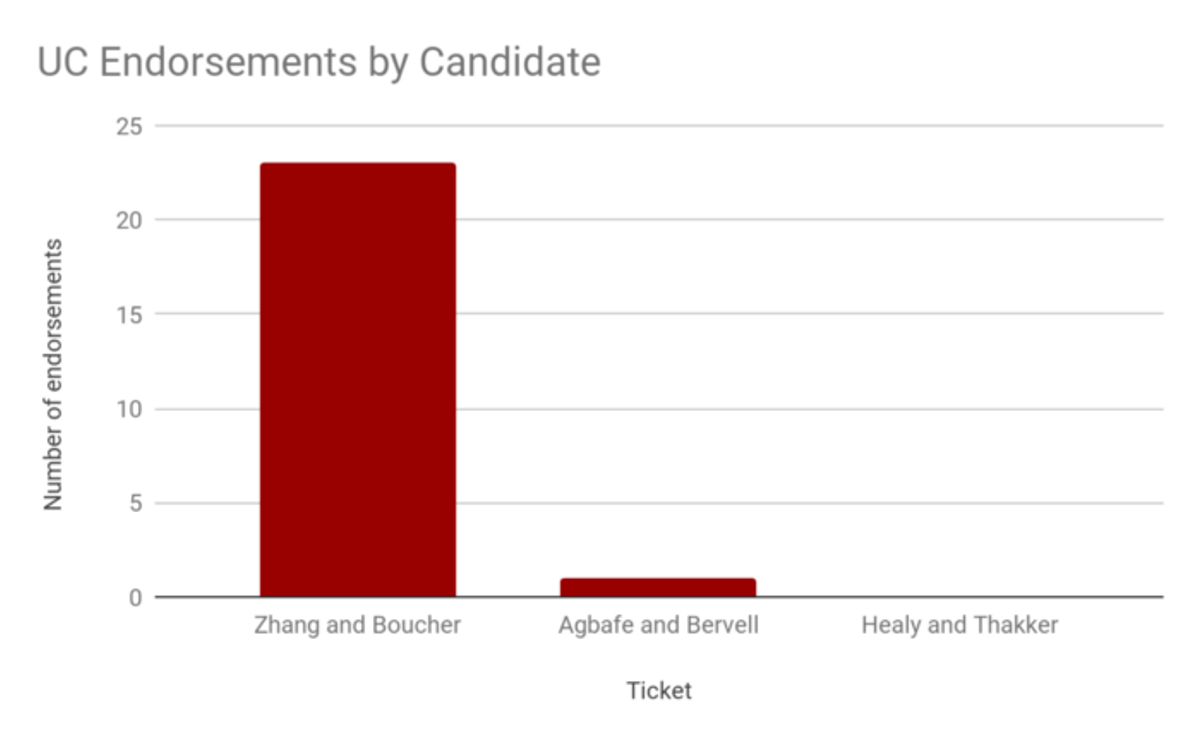 Zhang and Boucher have a massive lead in UC endorsements on Facebook: they have 23 to Agbafe-Bervell’s 1.

In addition to endorsements by sitting UC representatives, The Harvard Crimson’s editorial board endorsed Zhang and Boucher. Last year, The Crimson’s endorsed candidates did not ultimately prevail, so while this endorsement may not propel Zhang-Boucher to victory, it certainly will not hurt their candidacy.

Advantage: Zhang and Boucher. Last year, endorsements did not seem to be a great predictor of electoral success. However, we should not ignore them entirely, and they do seem to suggest an advantage for Zhang and Boucher, again followed by Agbafe and Bervell, with Healy and Thakker in third. 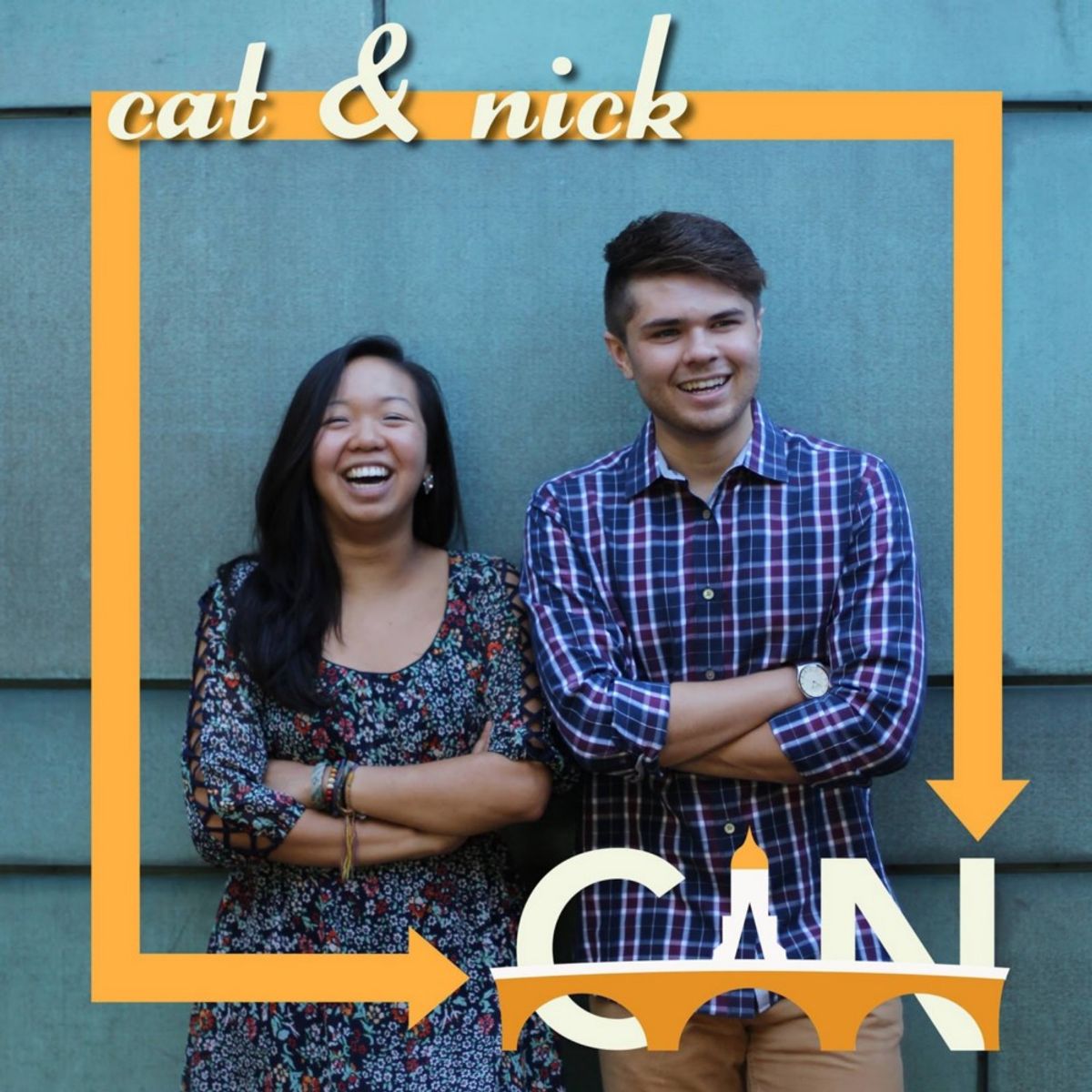 Catherine Zhang and Nicholas Boucher are pictured above in a campaign photo.

Based on our analysis, we project that Catherine Zhang and Nicholas Boucher will be elected the next President and Vice President of Harvard’s Undergraduate Council.

Polls, social media, and endorsements all point heavily toward a Zhang and Boucher victory. This result would also be consistent with our historical analysis last week, which showed that Zhang and Boucher’s UC experience and houses have historically correlated with victory.

After Zhang-Boucher, we will likely see Agbafe and Bervell in second place; we project Healy and Thakker to finish in third place. It’s worth noting that there were few apparent shifts in the campaign: while the poll was open, from Sunday through Tuesday, there was little movement in the tickets’ vote shares beyond small, noisy fluctuations.

Readers should be cautious and remember that all forecasts have some error, including this one. In addition, given the UC’s choice of the Hare-Clark electoral system, which is a Single Transferable Vote system, the results can be a bit harder to predict. Our poll only examines first choice votes, but under the Hare-Clark system, the winner in first-choice votes may not necessarily win the election. In fact, in past years, the winner has rarely won a majority of first-choice votes.

Based on a 99% confidence interval we calculated using our raw polling data, we predict that Zhang and Boucher will win between 59.9% and 72.5% of the first-choice votes. The confidence intervals for Agbafe-Bervell’s and Healy-Thakker’s vote totals overlap, so the polls do not clearly indicate which ticket will win 2nd place — but our other metrics suggest that Agbafe-Bervell have the edge.

Check back after the election!

Once the polls close and the winner is announced, check our blog for a follow-up analysis, where we’ll see what parts of our methodology worked and which fell flat. Thanks for reading!