Since embarking on our quest to use data to predict the results of Harvard’s 2016 Undergraduate Council election, we at the Harvard Open Data Project have learned just how many considerations go into a prediction. Over the past three days, we have collected thousands of data points, both qualitative and quantitative, for our team to analyze.

Our election prediction project, dubbed SixteenThirtySix, has been an exciting foray into the world of electoral politics, and we are excited to be sharing the results of the first-ever polling and predictions project for student government elections at Harvard.

The following four tickets of presidential and vice-presidential candidates appeared on the ballot this week:

Over the past three days, SixteenThirtySix analyzed many different quantitative and qualitative metrics for each of the four tickets. Below, we discuss each factor in detail before arriving at our final prediction.

In a day and time where it seems that almost everything is at the tap of a finger or click of a mouse, it is no surprise that campaigns prioritized social media presence. With the exception of Grant and Alexander, each of the remaining three tickets curated polished campaign pages on Facebook.

Likes drive page views. Page views generate engagement. Pages on Facebook with higher totals of likes appear on more News Feeds and Timelines, thus allowing campaigns to spread their message to a broader audience. Likes also may be a good indicator of support in the undergraduate body. In this important battle, Yaz & Cam for UC hold a wide lead, with more “likes” on their Facebook page than those of the other three tickets combined.

Putting the “social” in “social media,” the same three campaigns devised filters or themes that allowed their supporters to publicly share their support with their friends and followers. The three front-running campaigns all harnessed custom overlays that allowed individuals to show support on their own profile pictures.

In addition to the custom frames, Eduardo and Alex chose a more personal route, featuring hand-written whiteboard messages of what supporters wanted to see in “Our Harvard” — the campaign’s official slogan.

In studying the number of individual “endorsements”— which we define as a public profile picture change with an overlay or whiteboard — we at SixteenThirtySix were able to get a sense of popular sentiment within the student body.

Once again, Yaz and Cam left the rest of the field in the dust in terms of the sheer level of engagement with individual “endorsements.” This enabled their campaign to reach a larger audience and attract higher levels of name recognition and familiarity. These all translated into increased perceived support and, most likely, more votes.

Eduardo and Alex, as well as Scott and Evan, made up some ground in terms of mean and median likes, which implies higher enthusiasm among their respective supporters than the number of total likes might suggest, but Yaz and Cam still maintained a healthy lead across all of our social media metrics.

At this point in our analysis, the data suggested that three tickets (Yaz and Cam; Eduardo and Alex; and Scott and Evan) have the social media support necessary for a serious bid for the UC Presidency and Vice-Presidency. Grant and Alexander had a minimal presence on Facebook, consisting of a single “hype video” with 592 views. Their candidacy hinged on their outsider perspective, as neither candidate on the ticket has any UC experience. Unfortunately for them, their lack of a social media presence likely significantly hinders their chances of winning the Presidency.

Overall, Yaz and Cam’s dominant social media presence offers them a unique advantage over the other campaigns.

Some organizations on campus have come out in support of a certain campaign that they feel aligns most with their interests or values. Most notably, Eduardo/Alex and Yaz/Cam have received several prominent endorsements, including:

Eduardo and Alex’s ticket has been widely praised by many minority cultural organizations for being the only ticket to consider the plight of undocumented students at Harvard on their platform, an increasingly important matter under the incoming Trump Administration.

When weighing endorsement data, SixteenThirtySix considered the potential “reach” each statement of support carried, which we assumed to be proportional to the number of members on an endorsing organization’s email list (as most endorsements were announced over email). During this UC election cycle, board members of organizations have been actively campaigning for candidates by sending emails over pub-lists, speaking during meetings, and posting on Facebook.

As visualized above, Eduardo and Alex lead in this metric. However, SixteenThirtySix cannot account for “member overlap” between endorsing organizations; it is wholly possible that one student can be double- or even triple-counted in the above graph if he or she belongs to multiple organizations that have issued endorsements. Counterbalancing this is the Harvard Crimson editorial board endorsement of Eduardo and Alex as “stand[ing] above the rest.” The Harvard Crimson declined to provide viewership data, but we can imagine that their readership is broad, although not necessarily engaged in the same manner as one would be in an organization.

When it comes to organizational endorsements, advantage: Eduardo and Alex.

The three front-running campaigns are all composed of “establishment” UC figures, all six of whom have served at least two terms on the Council. The presidential candidates have all served as chairs of various UC committees. While we could not directly analyze their experiences working with other members on the Council, we did so indirectly by looking at the number of endorsements each candidate received from their fellow representatives:

Once again, Grant and Alexander’s ticket suffered from the candidates’ lack of connections on the UC. Scott and Evan lead in these endorsements by UC representatives, although it is worth noting that over 40% of those on the Council, including current President Shaiba Rather ‘17 and Vice-President Danny Banks ’17, have declined to state publicly who they are supporting. If the publicly undeclared representatives break along roughly the same proportions as those who have declared their support, Scott and Evan stand to benefit.

UC members generally have strong networks within upperclassmen Houses or in freshman Yards, and therefore can serve as effective surrogate campaigners.

Over the course of the voting period, SixteenThirtySix used this poll to try and gain a sense of overall student opinion regarding the UC election. While we are fully aware that a Google Form does not rise to the level of professional political polling or to the standards of representative samples, we have no reason to believe that there are systematic biases in the data we have collected. Our poll was “pubbed” over many different email list-servs and house lists in an attempt to reach a diverse and representative subset of the Harvard College student body. Realizing the statistical shortcomings of this methodology, we used the data gathered as a complementary source in our analysis, rather than as a primary source.

Total respondents in favor of each ticket

Distribution of respondents in favor of each ticket, sorted by grade.

Our survey received over 240 responses, which amounts to about 3.5% of the electorate. Yaz and Cam hold a plurality in the popular vote as well as a surprising lead among respondents in the freshman class. Freshmen, who traditionally have high voter engagement and turnout rates in UC elections, may be the deciding factor in this election. One potential explanation for Yaz and Cam’s success among freshman is their distribution of puzzle pieces across campus and throughout dorms in the Yard, echoing their campaign slogan of “piecing it all together.”

Further complicating our quest to predict the election, Undergraduate Council elections are conducted using a ranked-choice system, forgoing more well-known alternatives, including first past the post or the Electoral College. Thus, if voters’ first choices result in a neck-and-neck race, the Presidency could be decided on the strength of tickets’ down-ballot performances (i.e. on ballots for which they were not ranked first).

Before we at SixteenThirtySix make our official prediction for the 2016 Undergraduate Council election, we would like to thank those that have made this project possible.

We have genuinely enjoyed working on this project and learning about the positions and the people behind each of the four tickets. We hope that, no matter the result of the election or the accuracy of our prediction, SixteenThirtySix has sparked the spirit of open data at Harvard.

If you would like to view the data that we’ve used to inform our analysis, create our visualizations, and shape our prediction, please visit our GitHub or contact me at ckuang@college.harvard.edu. 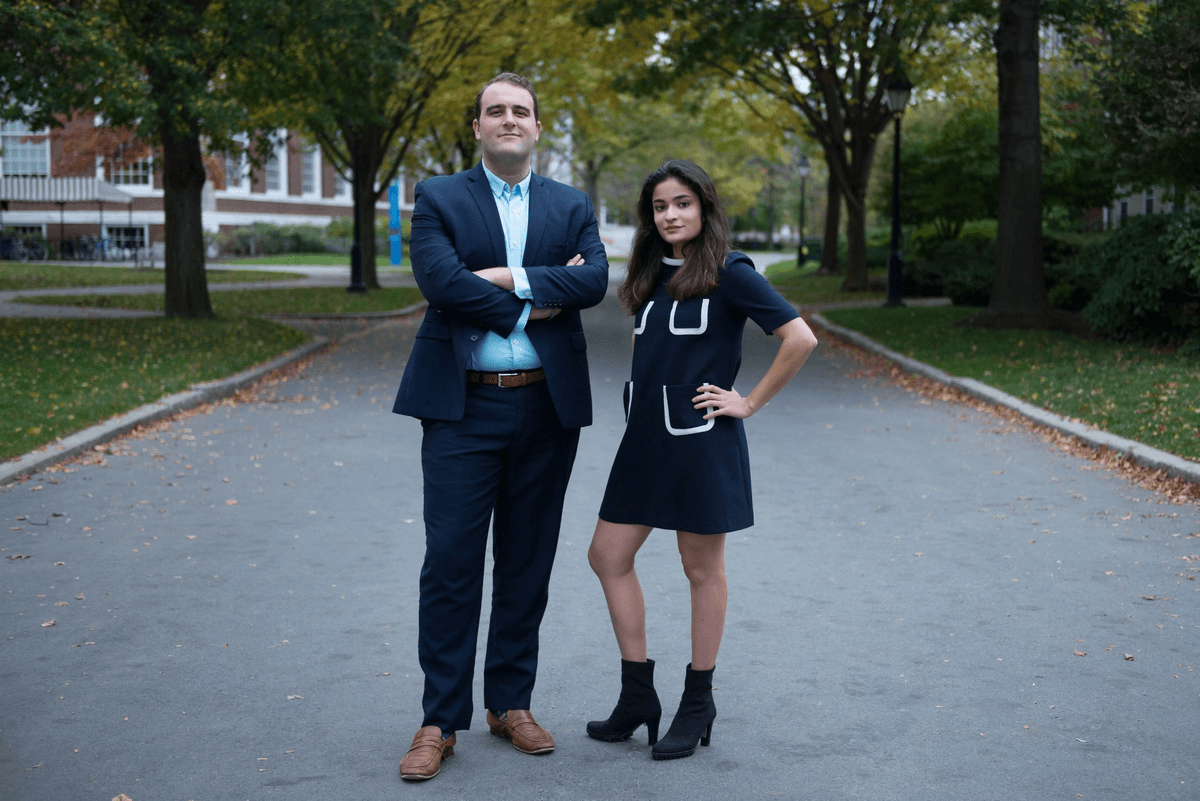 We believe that Yaz and Cam’s formidable advantages on social media and with the freshman class will be a winning combination. We predict that, close behind them will be Eduardo and Alex, followed by Scott and Evan, with Grant and Alexander rounding out the field.

While we are confident in our data and methodologies, we acknowledge that predicting elections is an imprecise science, as we saw when even professional pollsters and websites mis-predicted the 2016 American Presidential election. There will always be missing data points and trends that our data may fail to show. Still, we look forward to seeing the election outcome and hope that our predictions shed some light on what makes campaigns win or lose.

After the election results are announced tonight, we’ll publish a “postmortem” to evaluate the strengths and shortcomings of our approach and determine what we can learn about UC campaigns going forward.

SixteenThirtySix wishes to congratulate all of the candidates on their respectful, hard-fought campaigns, and thank them for raising the level of discourse on our campus and for their commitment to improving student life.