A data-driven election forecast by Manasi Maheshwari and Dasha Metropolitansky

Election season is in full swing at Harvard: on the heels of the U.S. midterms, students will vote for the next Undergraduate Council (UC) President and Vice President from November 12 to 15. We used past results, polling data, and social media trends to predict the next leaders of Harvard’s undergraduate student body.

This year, four tickets are vying for the opportunity to lead Harvard College’s student body:

A quick note: The Crimson has not included John and Sabrina as candidates in their recent coverage of the election, and they were not present at the UC Presidential debate. However, since they were approved as a ticket and their names appear on the ballot, we have included them in our prediction analysis.

In 2016 and 2017, the Harvard Open Data Project correctly predicted the results of the UC presidential election, and we hope to continue this streak. This year’s election will be slightly different from previous years because the UC has adopted a new voting system. Under the new system (Borda), voters rank each ticket; their first choice will receive 1 point, second 0.5 points, third 0.33 points, and fourth 0 points. Under the old system (Hare-Clark), voters also ranked the tickets, but if no ticket reached a predetermined threshold of first-place votes, then the bottom-ranked ticket was eliminated and its votes were transferred to remaining candidates. This process continued until a ticket met the threshold of first-place votes or all tickets but one had been eliminated.

With Borda, the ticket with the largest number of first-place rankings is not guaranteed to win if a competitor has a sufficiently large number of second and third place votes. In light of the fact that each voter’s preferences matter and can affect the outcome of this year’s election, our analysis of polling data will consider the total value of the tickets from all votes they receive, not just the number of first-choice votes as was done in previous years. In consultation with professional electoral analysts, HODP determined that Borda allows for strategic voting; to mitigate this risk, we published this article just before the end of the voting period to avoid influencing voter behavior.

Last year, the Harvard Open Data Project analyzed the common features of successful Presidential tickets since 2005. The two most significant factors seem to be past UC experience and the candidates’ houses. Where do the 2018 tickets stand on these points?

It’s important to note that these trends, while useful, are not guaranteed to hold true each year. For example, a joke ticket won the 2013 election, even though both candidates lacked UC experience and lived in River houses…

From November 7 to November 11, we conducted an online poll of Harvard undergraduates. We asked respondents to select their class (freshman, junior, sophomore, or senior) and rank the tickets from first to fourth. We received 264 responses. We believe that this sample is representative of the overall voting population because we assume that people who are more likely to respond to the poll are also more likely to vote in the election, which historically has low turnout.

Sruthi and Julia won the majority of first-place votes, while Daniel and Samyra show a slim lead in second-place votes.

We calculated the total ticket value by multiplying the number of first-place, second-place, third-place, and fourth-place votes for each ticket by 1, 0.5, 0.33, and 0 respectively and adding these values. Here’s what we found: 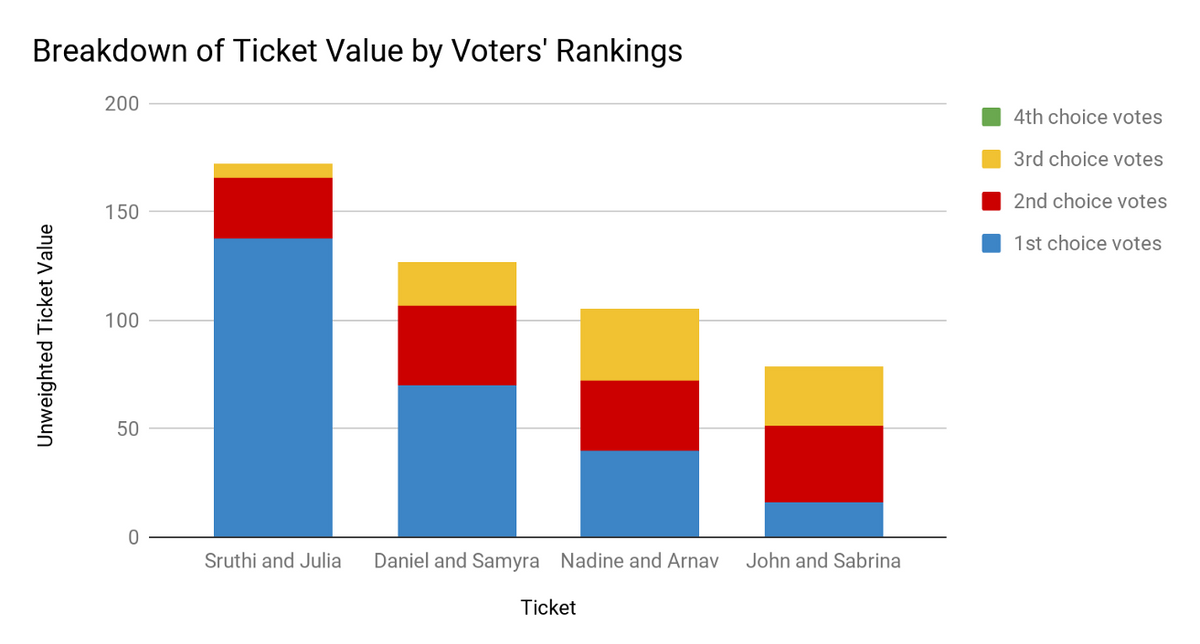 The top tickets (Sruthi and Julia, Daniel and Samyra) received most of their value from first-place votes.

Next, we adjusted the total ticket value calculation by assigning weights to class. Each year, freshmen make up most of the voters in the election, so we weighed their votes more heavily than those of upperclassmen. The specific weights correspond to each class’ voter turnout percentage in last year’s fall UC elections. Here are our results for the total points of each ticket weighted by class: 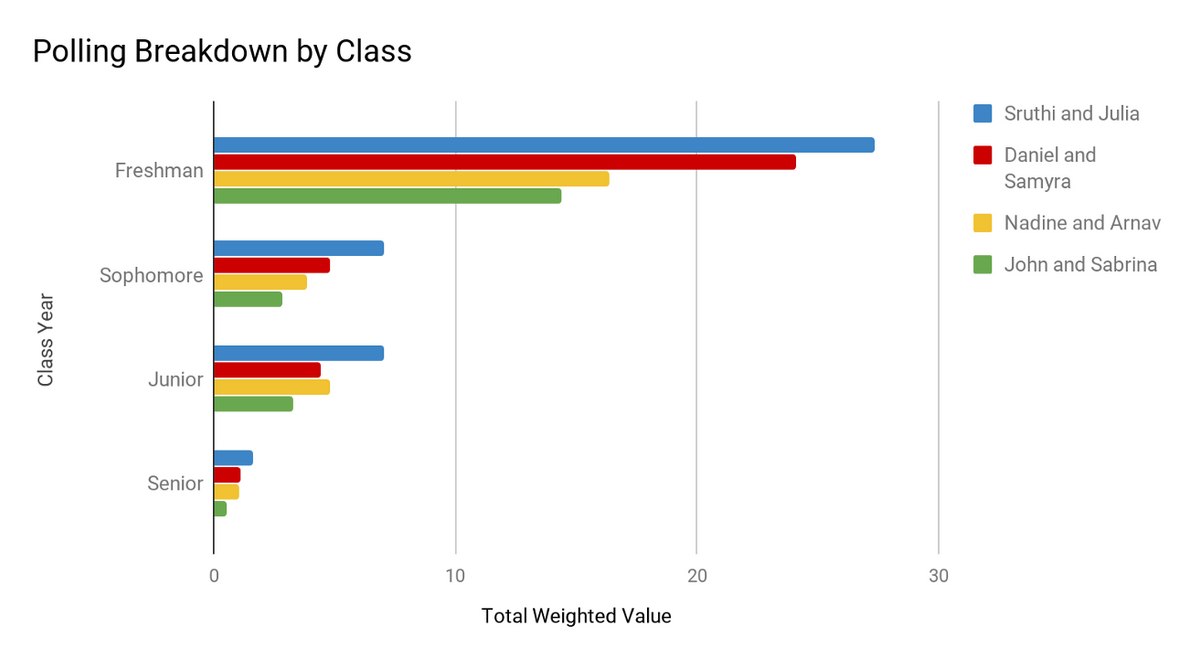 Sruthi and Julia dominate in points among all classes, and the largest proportion of their total value comes from freshmen.

Even when we account for the importance of winning freshman votes, the same ticket rankings observed in the unweighted total ticket value calculations hold. However, we noticed that the gap between the winning and runner-up tickets narrows, and, similarly, the difference between the third and fourth-place tickets is reduced. This is likely explained by the fact that the top ticket (Sruthi and Julia) received only a slightly larger point value from freshmen than the second-place ticket (Daniel and Samyra), and the same is true for the comparison between the third (Nadine and Arnav) and fourth-place (John and Sabrina) tickets.

In past elections, social media presence and name recognition have been important indicators of candidates’ success. We tracked each ticket’s Facebook presence from Tuesday November 6 to Monday November 12.

Daniel and Samyra’s Facebook page had the greatest number of likes, followed closely by Sruthi and Julia. Nadine and Arnav’s page had substantially fewer likes than the top two tickets. John and Sabrina did not create a Facebook page, so their social media presence was notably lacking compared to the other candidates. 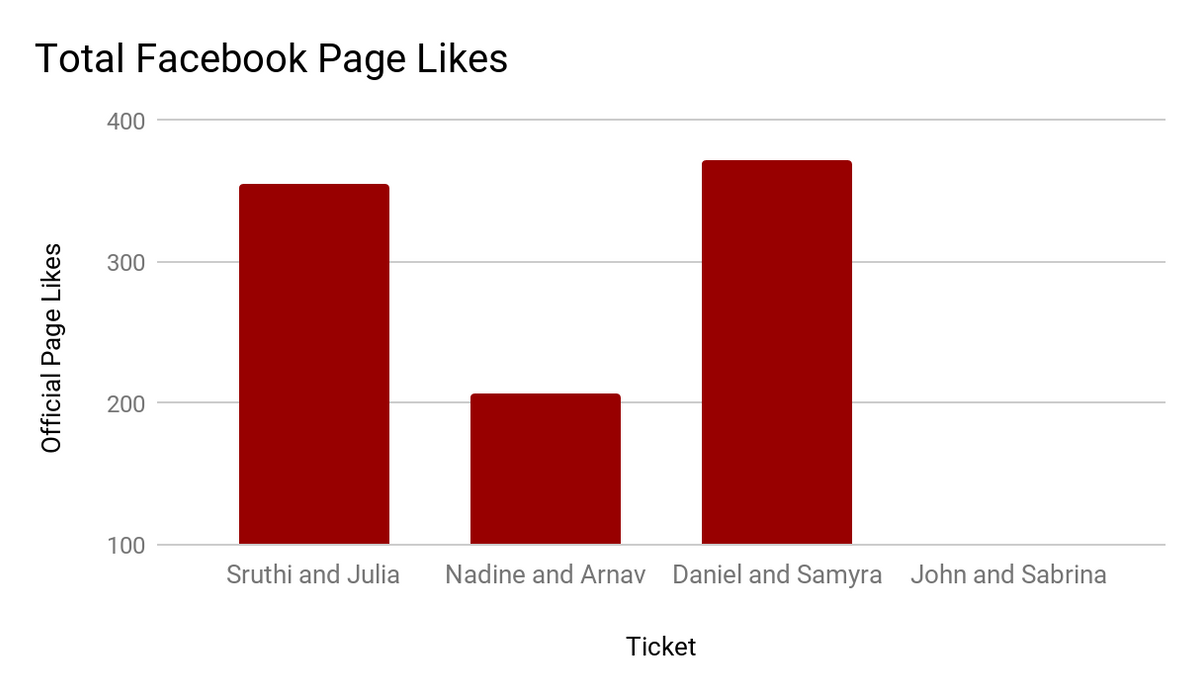 Daniel and Samyra’s Facebook page had the most likes, edging out Sruthi and Julia. 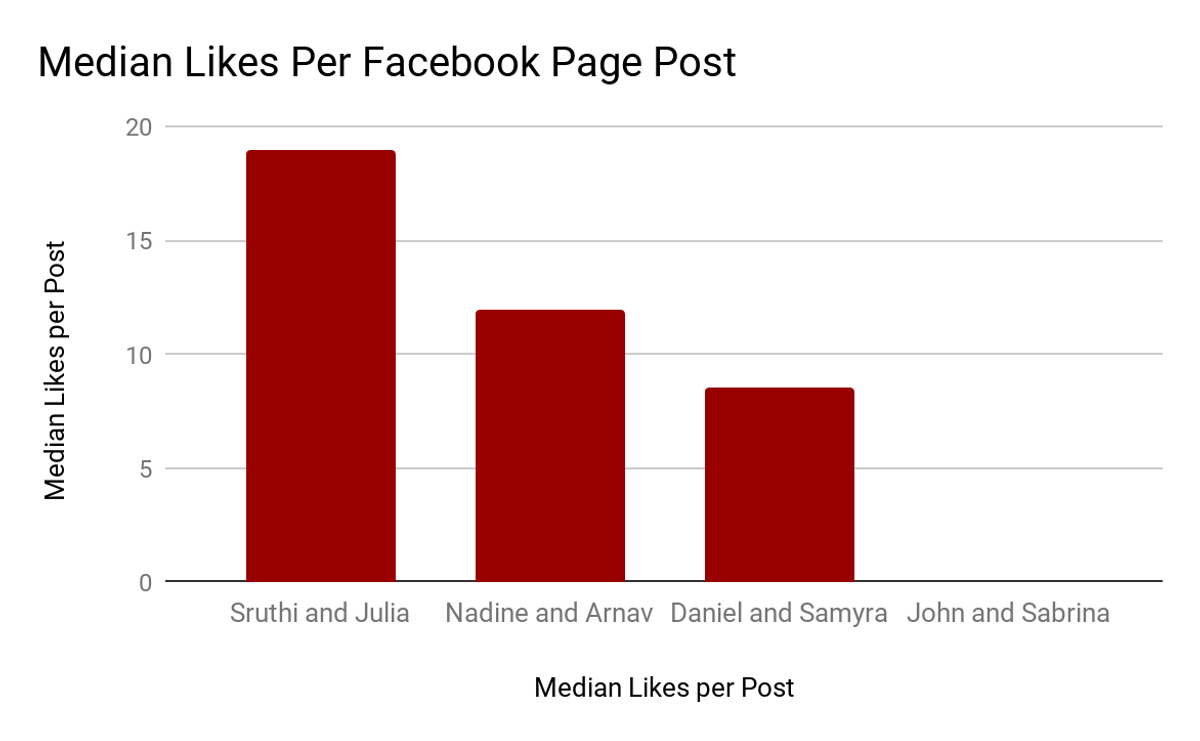 We also accounted for social media support by tracking Facebook posts made by Harvard College students in support of a ticket, both while collecting signatures to qualify for the election and after the tickets officially declared their candidacy. We defined supporting posts as messages of endorsement as well as profile pictures and cover photos with a ticket’s filter.

We calculated the median number of likes per supporting post for each ticket and found that Sruthi and Julia came out on top, followed by Nadine and Arnav, then Daniel and Samyra, and finally John and Sabrina. 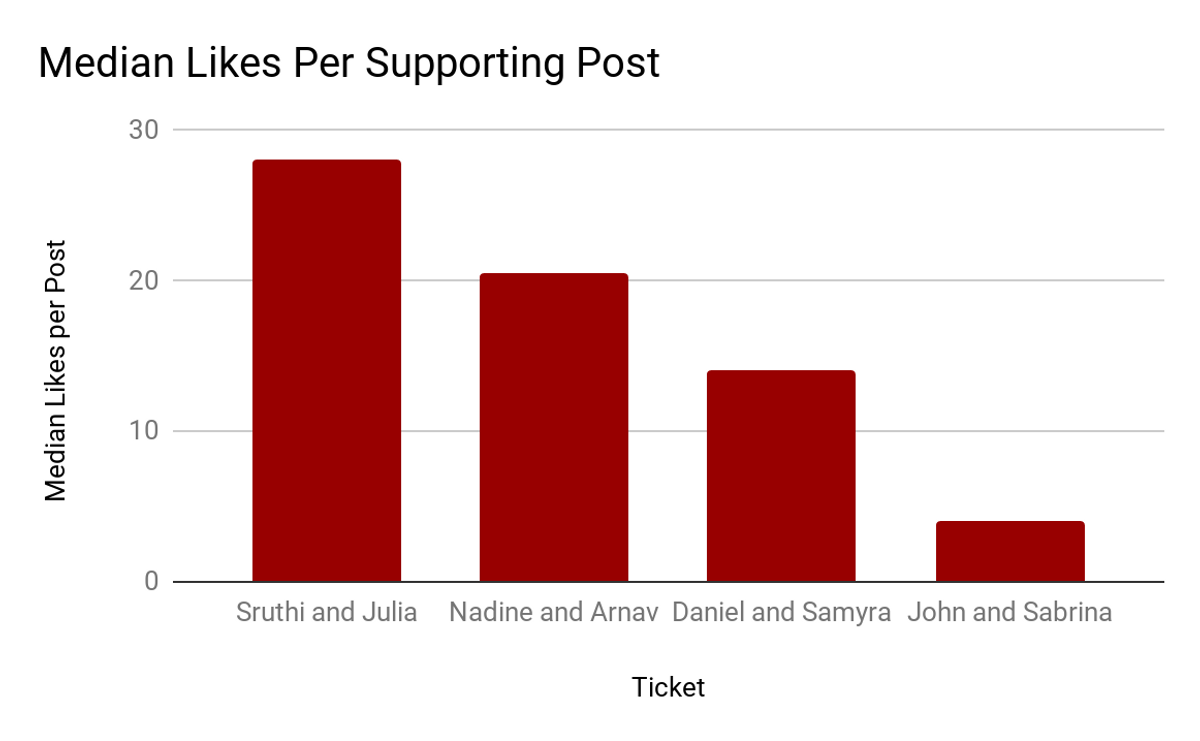 Sruthi and Julia had the most likes per supporting post, while John and Sabrina had the least.

Advantage: Sruthi and Julia. Although our indicators of social media presence are limited and results are not consistent across our chosen metrics, overall, Sruthi and Julia come out on top. They have the most likes per posts made by their page and supporters, as well as the greatest number of supporting posts. While Daniel and Samyra have a slim lead on Sruthi and Julia in terms of the number of people who like their campaign page, they post far less frequently on their page, have significantly fewer supporting posts, and earn fewer likes on their page’s and supporter’s posts. Nadine and Arnav’s likes per post were consistently in second place behind Sruthi and Julia, and they also had a substantial number of supporters on social media. Finally, John and Sabrina’s lack of social media presence and subsequent reduced online visibility could arguably hurt them in the election.

Sruthi Palaniappan and Julia Huesa, the next UC President and Vice-President according to our data, pictured in a campaign photo.

Based on our analysis of polling data and social media presence, we predict that Sruthi Palaniappan and Julia Huesa will be elected the next President and Vice-President of the Harvard Undergraduate Council.

We expect to see Daniel Ragheb and Samyra Miller in second place because of their strong poll results and large follower base. We predict that Nadine Khoury and Arnav Agrawal will rank third; their advantageous ticket composition and social media presence will help them place above John T. Ball and Sabrina Wu.

Best of luck to the candidates, and don’t forget to vote!