How do Harvard students feel about the 2020 election?

Although the general election is more than a year away, the race for the 2020 Democratic presidential nomination is already in full swing. Twenty Democrats are currently running for president, crowding the debate stage and vying for voters’ support. With so many options, which candidates seem to have the edge? Many polls have already been conducted nationally, but we at the Harvard Open Data Project decided to take a closer look at the opinions of students at our own school.

The data used in this article was gathered from a survey sent out by HODP just before the second Democratic debates. The survey, which accepted responses from July 27th until July 30th, was distributed via email to members of the HODP survey group. 149 Harvard undergraduates responded to the survey. It is important to acknowledge that our respondents are not a random sample of Harvard undergraduates — joining the survey group was voluntary, and the survey was sent only to members of the group. Noting that some respondents identified with multiple races (and therefore, the percentages add up to more than 100%), 51% of our respondents identified as White, 41% as Asian, 13% as Hispanic or Latino, 9% as Black or African American, 3% as Middle Eastern or North African, and less than 1% as Native Hawaiian or Pacific Islander. This breakdown does not exactly reflect the population of admitted students — in particular, Asians appear to be substantially overrepresented in our group of respondents, while Black or African American students are underrepresented. Men (57%) are also slightly overrepresented in our group.

Since the conclusion of the HODP survey, three candidates who were listed as options in our questions have dropped out of the race: former Colorado Governor John Hickenlooper, Washington Governor Jay Inslee, and New York Senator Kirsten Gillibrand.

Harvard undergrads favor their state’s senior senator, Elizabeth Warren. Among respondents who indicated that they were planning to vote Democratic in 2020 or were unsure, Warren (34%) was the most common first-choice candidate, followed by Harvard alum Mayor Pete Buttigieg (21%) and former Vice President Joe Biden (18%). Warren was also the candidate most often listed as students’ second choice, while Senator Kamala Harris was the most popular third-choice candidate. 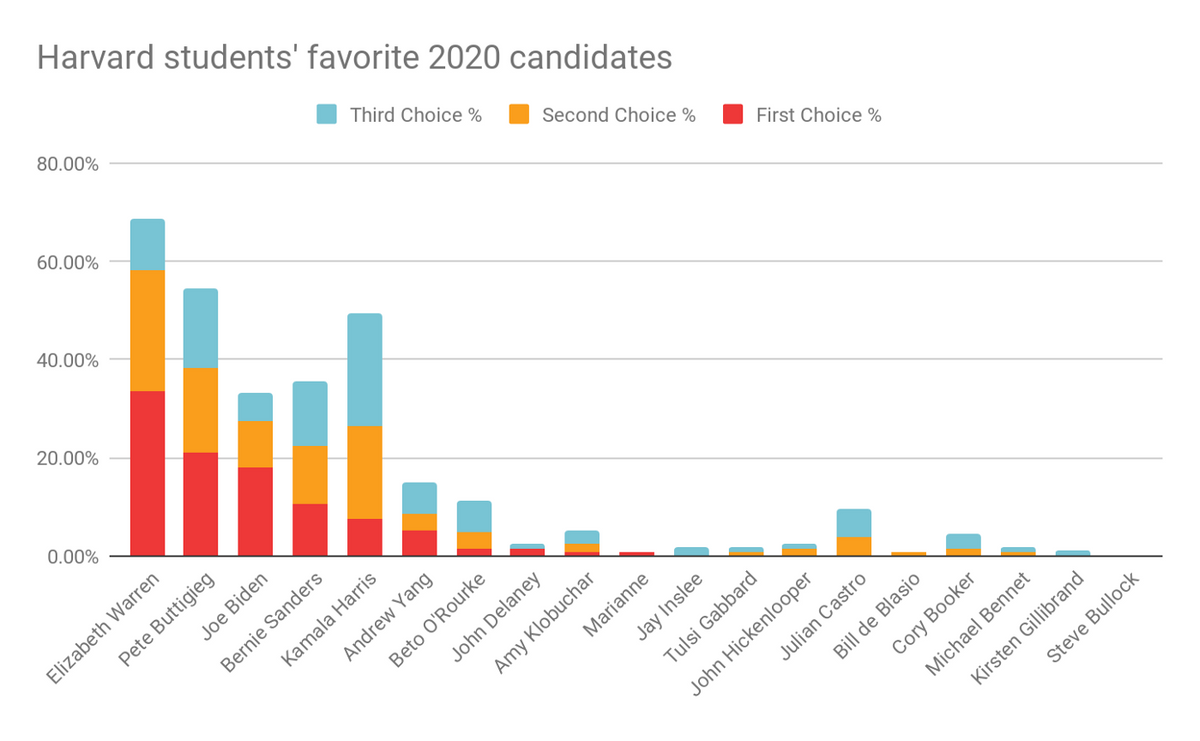 These results differ significantly from most national polls conducted during the same time period, which reported that Biden was leading the field at about 30% support. The next most popular candidates were Senators Sanders and Warren, who were both polling in the teens. Buttigieg, meanwhile, polled in the mid single digits. Additionally, while Andrew Yang was the top choice of 5% of our survey respondents, his national support hovered at 1–2%.

These differences are not surprising given the demographic composition of Harvard’s student body. Harvard undergraduates are young, overwhelmingly liberal (71% of our respondents identified with the Democratic Party), and highly educated — a demographic that is less likely to support Biden and more likely to support Warren or Buttigieg, as well as more radical candidates like Yang. 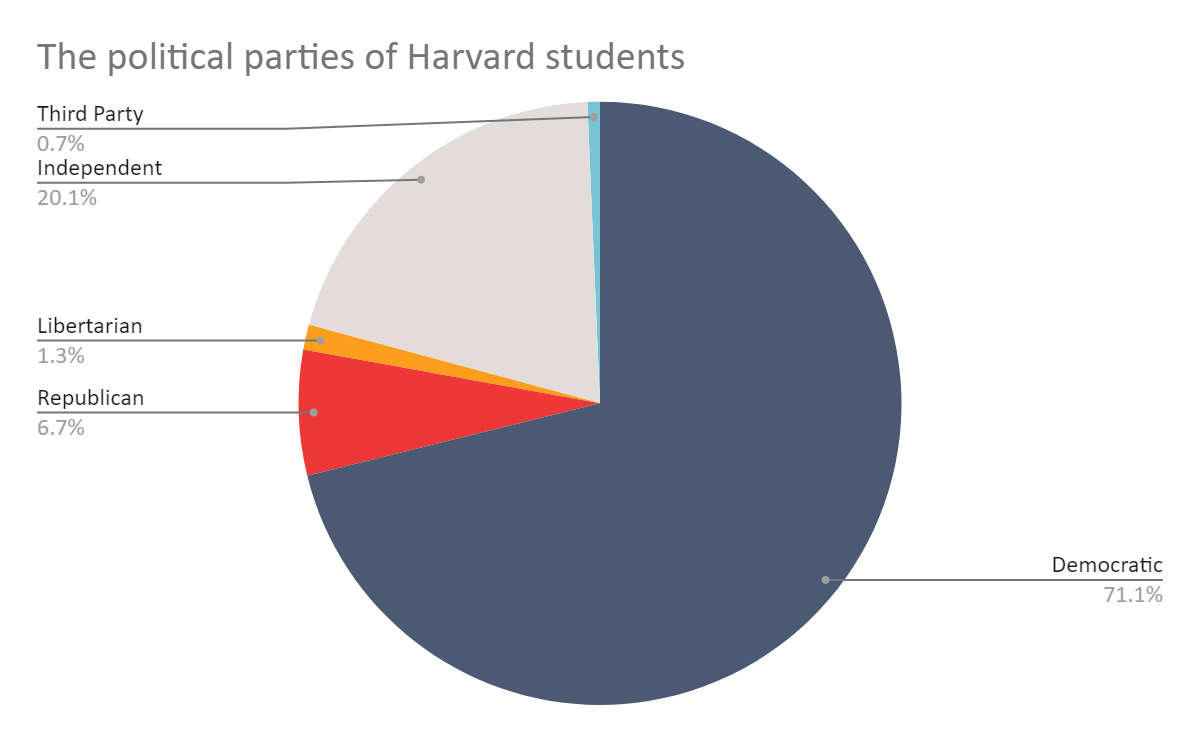 Even among Harvard students, however, there was a statistically significant difference (p=0.02) between the preferences of those who said they would definitely vote for the Democratic nominee in the general election and those who said their vote depends on who the nominee ends up being. While just 13% of the surefire Democratic voters indicated that their first choice was Biden, the former vice president was the top pick of 45% of those who were undecided about which party they would vote for. 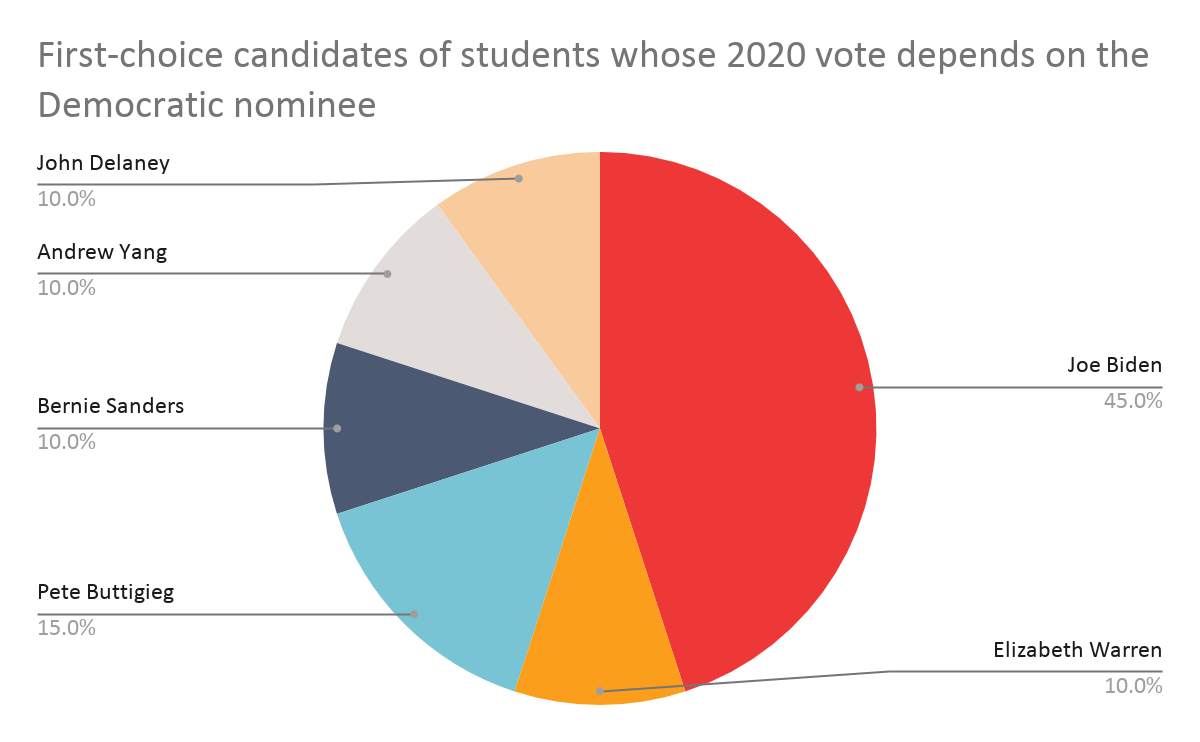 Which pairs of candidates do students choose together?

Several pairs of candidates frequently appeared together in students’ rankings of their top three choices. The most common pairs were:

While some of these pairings seem to have clear ideological underpinnings (e.g. Sanders and Warren), the reasons behind others are less obvious. The pairing of Buttigieg and Warren, for example, makes little ideological sense — Buttigieg is one of the more moderate candidates in the race, while Warren champions the left. The common thread between the two candidates may instead be a shared sense of “intellectualism.” Both Buttigieg and Warren tend to portray themselves as smart, articulate, and well-prepared, and the frequency of this pairing among respondents suggests that these shared qualities can sometimes outweigh substantive policy differences. 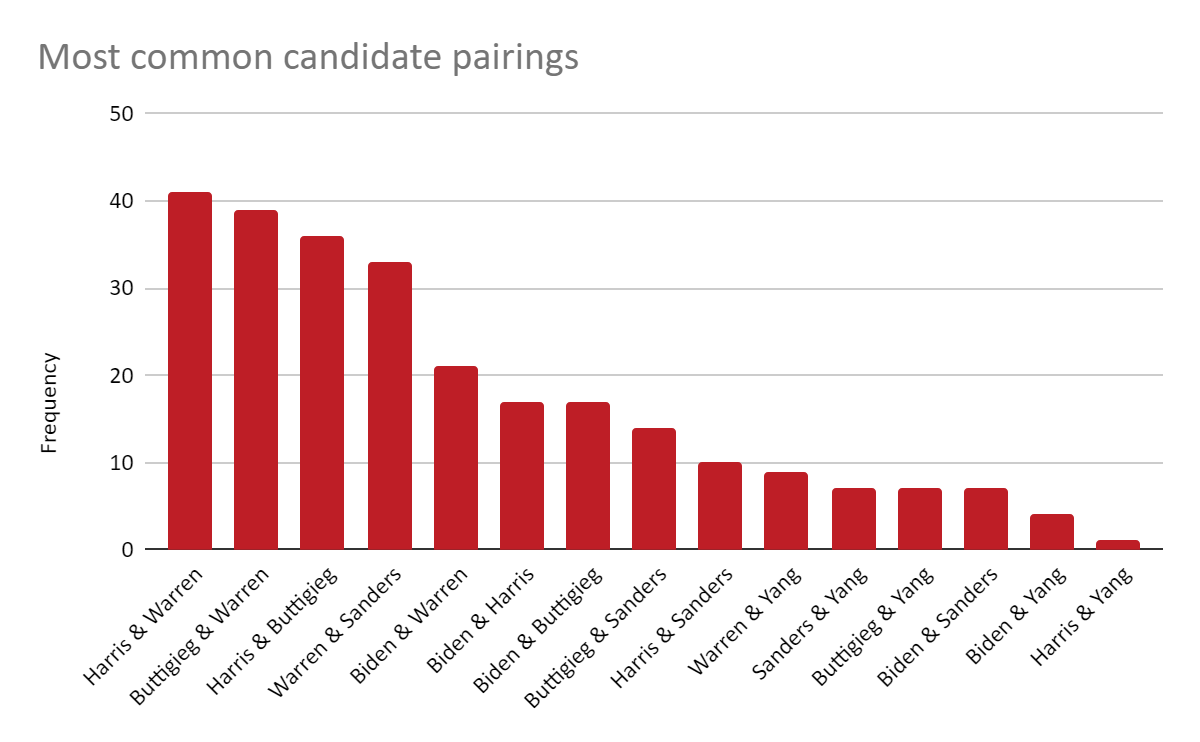 How much does electability matter?

While the concept of “electability” has often been criticized as being a stand-in for “white and male,” Democratic voters still seem to care deeply about nominating a candidate who has the best chance of defeating President Donald Trump. To determine how electability plays a role in the preferences of Democrats at Harvard, we asked students who they thought was most likely to defeat Trump in a general election and compared each student’s response to their most preferred candidate. 44% of students responded that their first-choice candidate was also the most electable. Of these students, 39% preferred Joe Biden, while 24% supported Elizabeth Warren and 15% backed Bernie Sanders. Out of the rest of the students, a whopping 55% responded that Biden was the most electable candidate in the field. 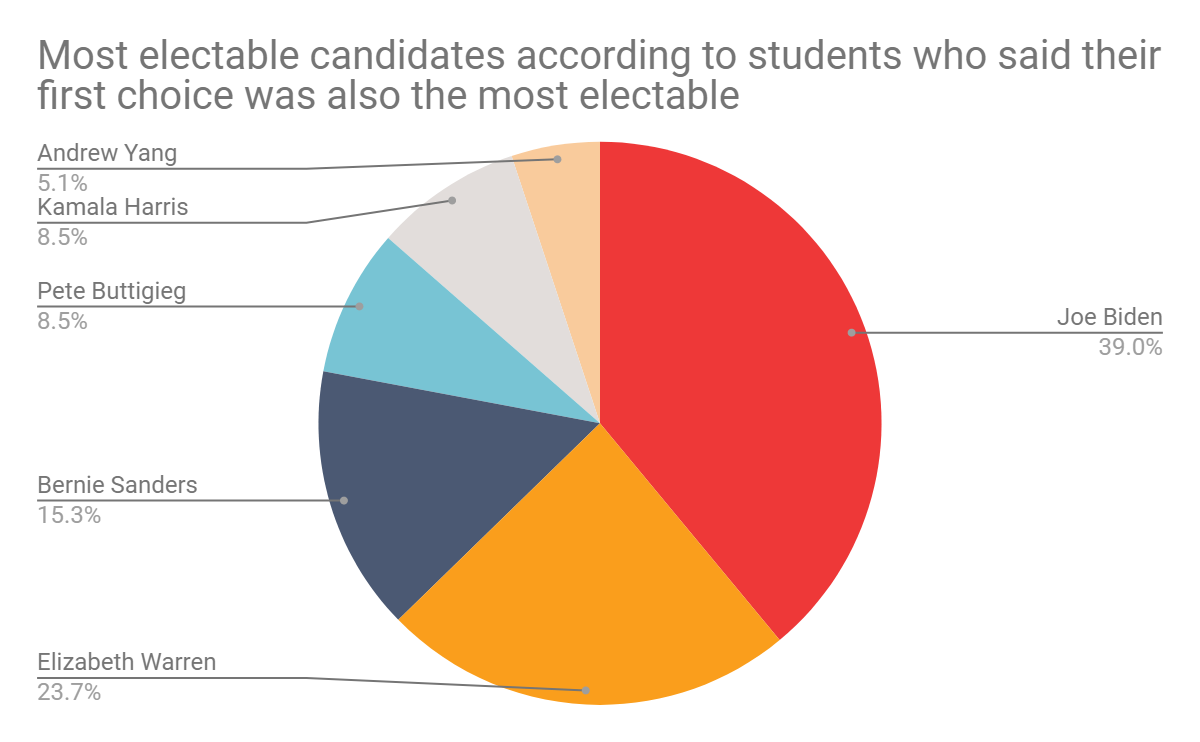 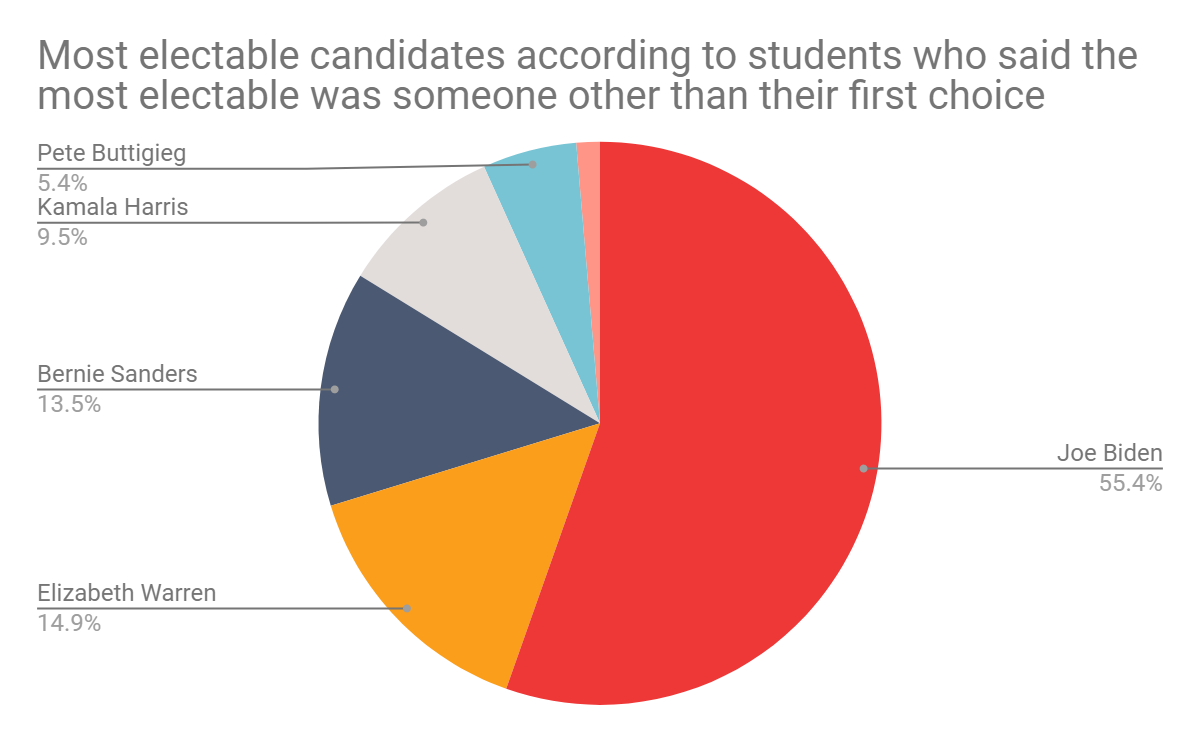 Although we can observe a correlation between candidate preferences and perceived electability, it’s more difficult to determine the direction of the causal relationship (if one exists at all). Students might prefer the candidates they find more electable, or they might have simply convinced themselves that their favorite candidates really do stand the best chance against Trump.

In addition to ranking their top three candidates, students were asked to choose the three issues they thought were most important to the 2020 election. Overwhelmingly, the most commonly listed option was climate change, which reflects the increasing national emphasis on the issue. The second most commonly listed issue was defeating President Trump. The order of importance of the remaining issues is less clear, although criminal justice reform, gender inequality, LGTBQ issues, and national security were mentioned substantially less than the other options. Harvard undergrads seem to take seriously the threat of climate change, but they prioritize defeating Trump over most specific policy areas. 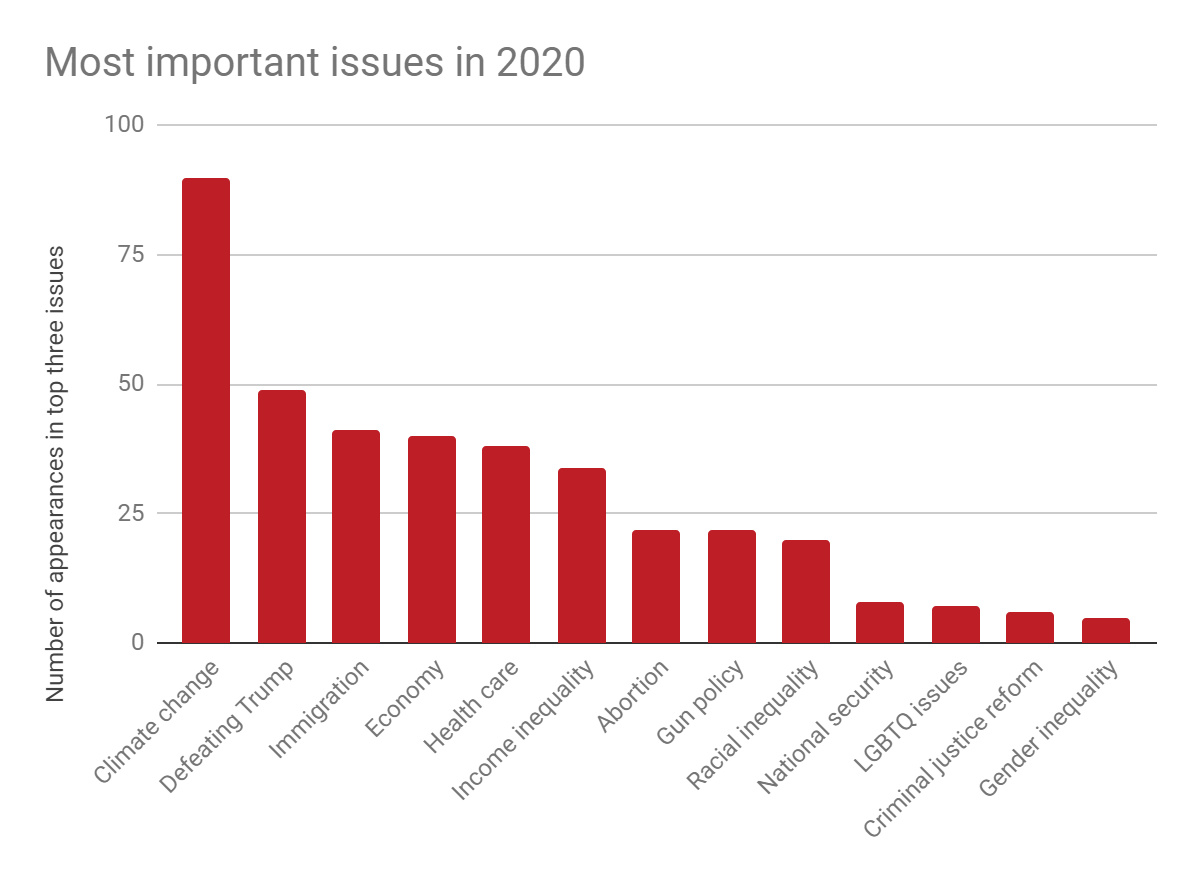 Our survey results indicate that the preferences of Harvard undergrads don’t closely mirror those of the general electorate. Elizabeth Warren, Pete Buttigieg, and Andrew Yang outperform their national polling averages among Harvard students, while Joe Biden receives less support than he does nationally. Besides the candidates they support, Harvard students also assign a lot of importance to the issues of climate change and defeating Trump in the general election. However, these preferences may still shift by the time students are actually able to vote. The first 2020 primaries aren’t held until February, and if we’ve learned anything from previous election cycles, it’s that a few months can change everything.