How diverse is Harvard's faculty?

Tracking changes in FAS faculty demographics from 2010 to 2020.

As the Class of 2025 eagerly awaits their Harvard decision letters, there is little doubt that their class will follow the trend of the past several years to become one of the most diverse student classes at Harvard. However, while Harvard actively recruits a more diverse student body, efforts to diversify academic staff continue to lag behind.

Harvard’s faculty tenure system is the subject of debate once again with the denial of professor Cornel West’s request for tenure, which has sparked backlash from students questioning Harvard’s commitment to a diverse faculty body. The University also faced backlash last year for its decision to deny tenure to Romance Languages and Literatures associate professor Lorgia García Peña.

In light of the recent questioning and as a follow-up to our 2018 article, HODP analyzed the demographic composition of Harvard tenure-track and tenured FAS faculty. Despite purposeful changes in the recruiting process, such as specialized professional programs and workshops, historically underrepresented groups—such as those who identify as women, as Asian, or as an underrepresented minority—still remain largely underrepresented. Out of the 569 tenured and 158 tenure-track faculty, there is still room for a greater representation of Harvard’s student and academic diversity.

Publicly available data for tenured and tenure-track faculty was collected from The Office of Faculty Development & Diversity, which recorded the number of tenured and tenure-track faculty spanning from 2010 and 2019 in three categories: women faculty, Asian faculty, and underrepresented minority faculty. Tenured faculty include the ranks of Professor and Professor in Residence. Tenure-track faculty include the ranks of Convertible Instructor, Assistant Professor, and Associate Professor. Data on student demographics was collected from the Common Data Sets published publicly by The Office of Institutional Research.

URM faculty continue to be underrepresented 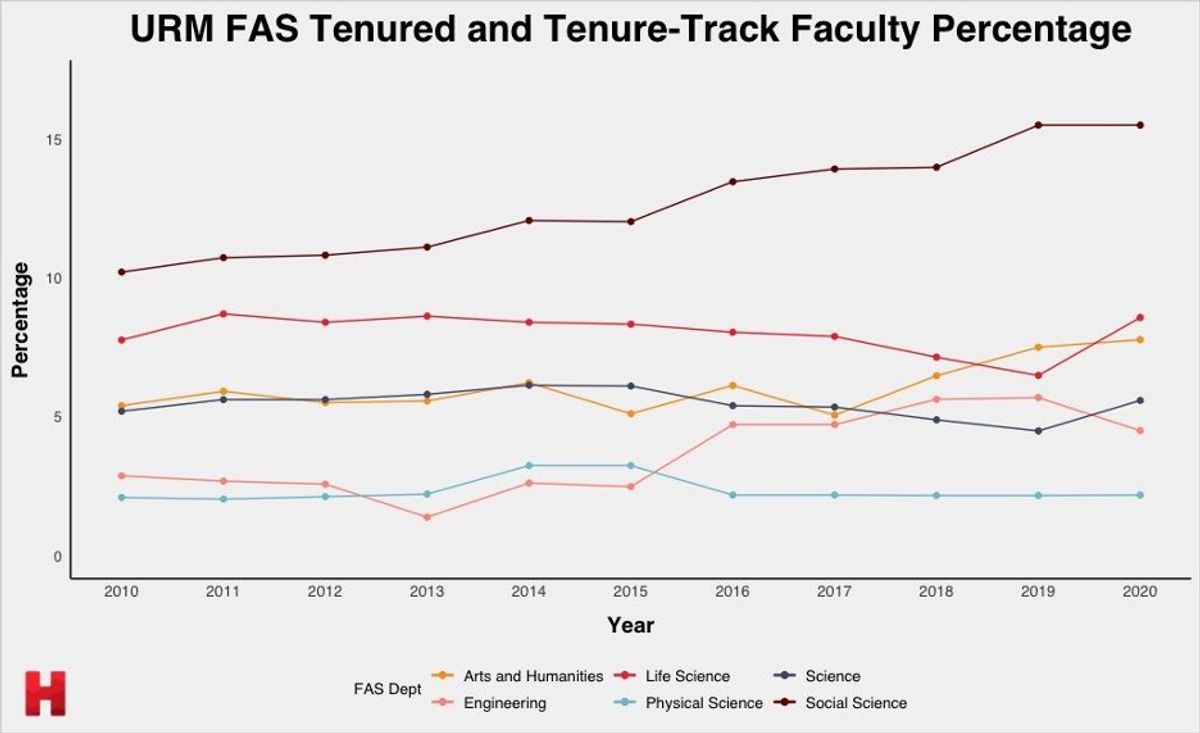 Figure 1: The above graph shows the percentage of tenured or tenure-track faculty members per department who identify as URM out of total. The data span from 2010 to 2020.

Social Science, the only department that followed a consistent upwards trend in the past ten years, saw an increase of 10.21 percent to 15.51 percent URM tenured and tenure-track faculty.

The Social Science department, which has the highest percentage of URM tenured faculty relative to the other departments, also had the largest percent increase over the past ten years.

In the Engineering department, the number of URM faculty steadily increased until 2020, when the percent dipped to only about 4 percent. The other FAS departments have maintained fairly consistent percentages of URM tenured and tenure-track faculty, reflecting small staffing changes of a couple of people.

Breaking down the tenured and tenure-track distinction, most of the increases occurred within the tenure-track rank, meaning few URM faculty have received full tenure. In the case of the Physical Science department, only 2.08 percent of faculty offered tenure in 2010 identified as URM. There has been little change to this percentage over the past ten years.

In spite of the low numbers, the increase in tenure-track URM faculty shows positive improvement. Promotion to tenure is a long and lengthy process that generally involves first becoming tenure-track. As such, the addition of more URM tenure-track faculty creates a broader pool of potential promotions. 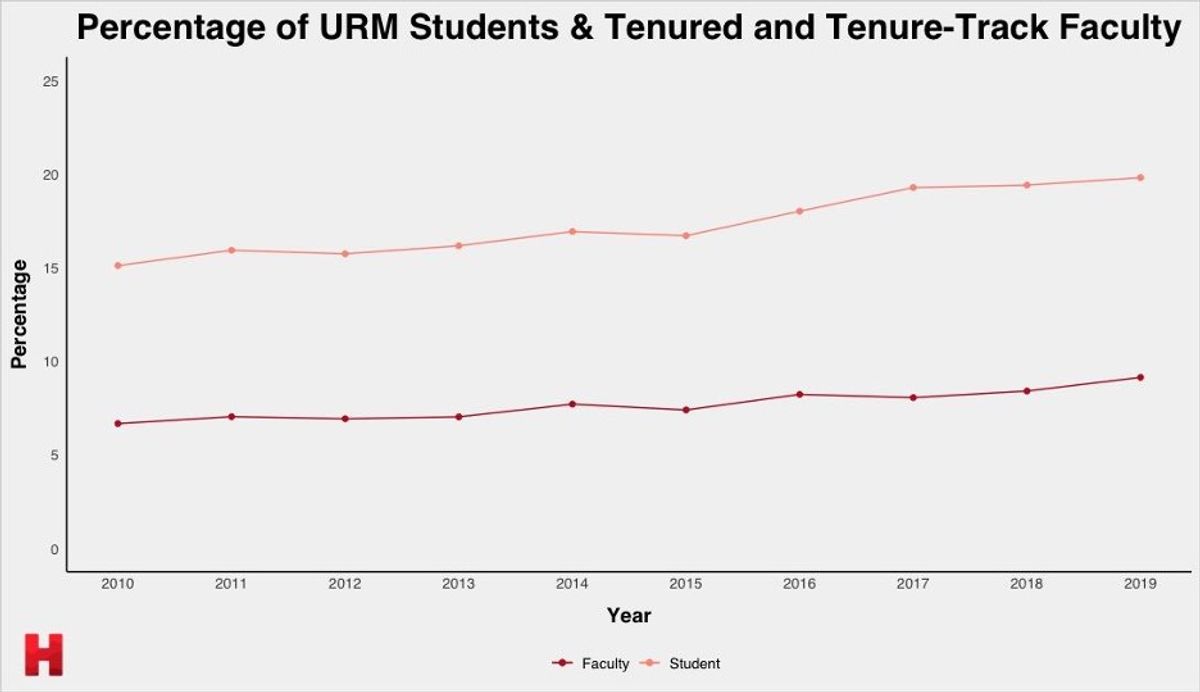 Figure 2: The above graph plots the proportion of undergraduate students and tenured or tenure-track faculty at Harvard College who identify as Hispanic/Latino, Black or African American (non-Hispanic), or Native Hawaiian/other Pacific Islander (non-Hispanic).

Over the ten years plotted, Figure 2 shows an increase in percentage of URM students, from 15.10 percent to about 19.80 percent. Though faculty percentages have slightly increased as well, they still don’t match student demographics. As shown, there is almost a consistent 10 percentage point difference between the number of students and number of tenured and tenure-track faculty. 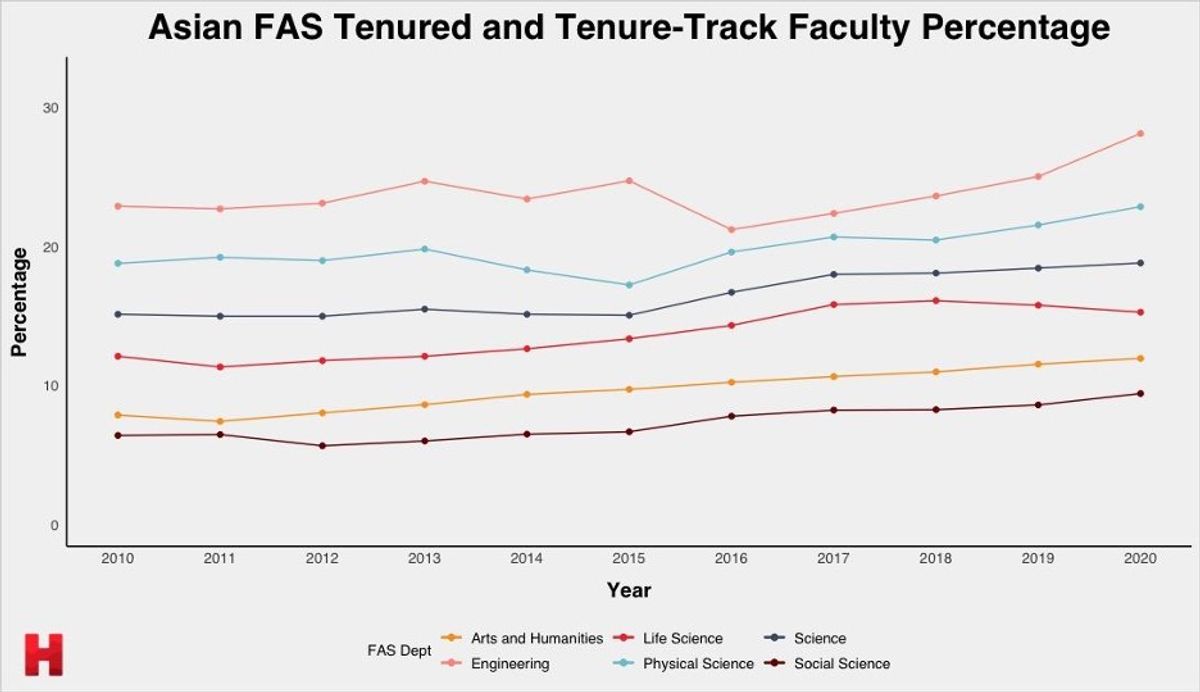 Figure 3: The above graph shows the percentage of tenured or tenure-track faculty in each FAS department who identify as Asian.

In the Common Data Set, Asian is defined as someone of East, South, or Southeast Asian descent. In recent years, there has been controversy surrounding Harvard’s evaluation of Asian applicants; should Harvard face the same criticism for their evaluation of faculty?

This gradual increase is comparable to the increase in the percentage of Asian undergraduates enrolled at Harvard, as shown in Figure 4. 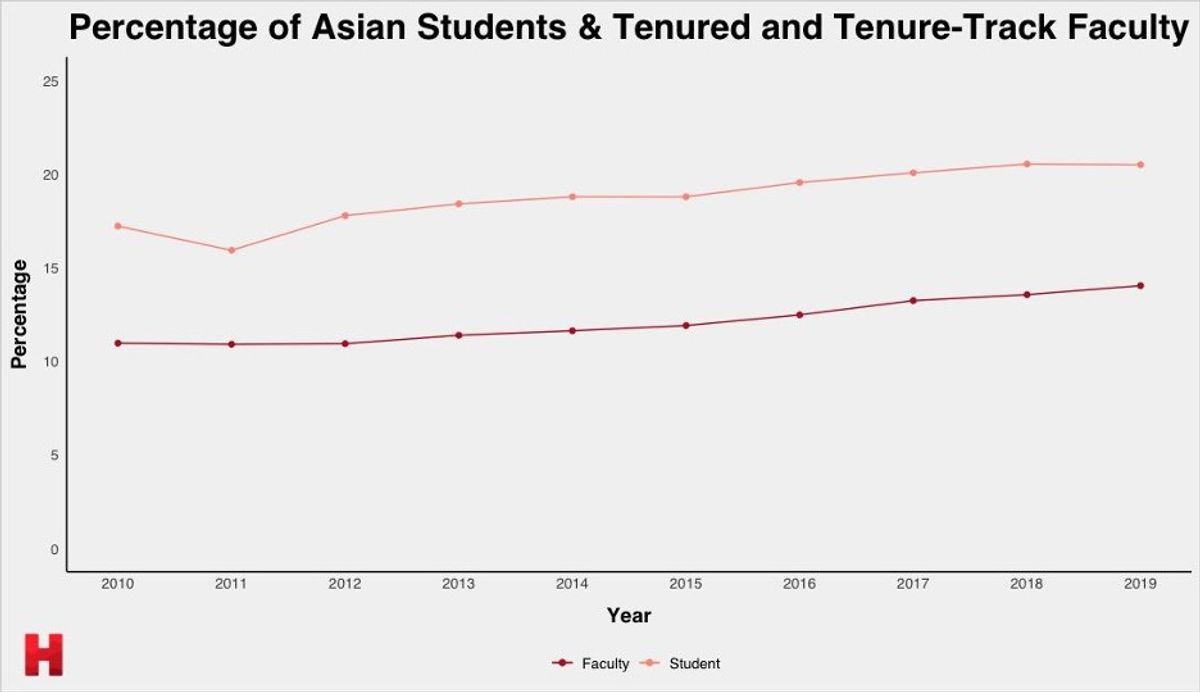 Figure 4: The above graph plots the percentage of students and tenured or tenure-track faculty at Harvard College who are Asian.

Figure 4 depicts the change in the number of Asian students enrolled at Harvard College. The lines representing faculty and students in Figure 4 are nearly parallel, especially since 2011, showing the consistent growth between Asian students and tenure and tenure-track faculty. The percentage of Asian undergraduates enrolled  increased from 17.21 percent to 20.49 percent in the last ten years, with this gradual increase beginning in 2011.

The percentage of Asian faculty clearly followed a similar rate of growth between 2010 and 2019 as that of Asian undergraduates.

Proportion of female faculty increases in most FAS departments 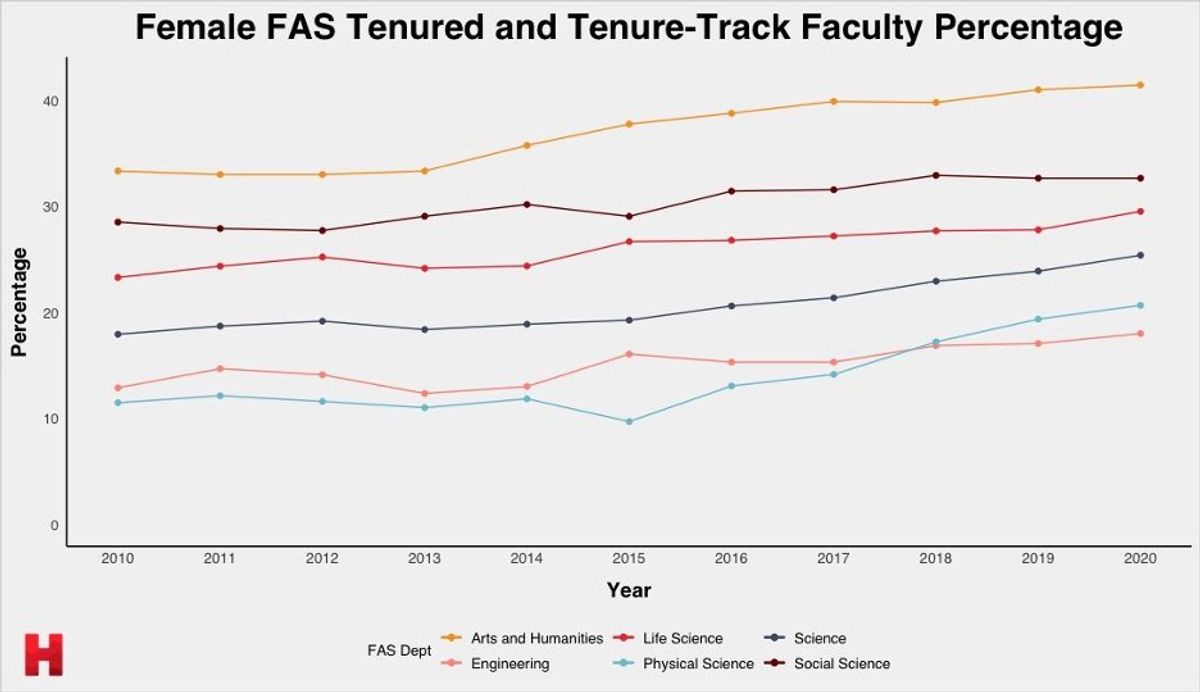 Figure 5: The above graph shows the percentage of tenured or tenure-track faculty members per department who identify as female. The data span from 2010 to 2020.

Two decades after the Harvard-Radcliffe merger, the number of female faculty across departments has generally been increasing. The Physical Science department experienced the most notable change, jumping from a low of 9.68 percent women in 2015 to its current proportion of 20.65 percent. The Engineering and Science departments both saw steady, but slightly slower growth starting from 2015. Even the Arts and Humanities department saw a slight bump in numbers since 2018. All departments saw a rise in female tenured and tenure-track faculty in the past couple of years—with the exception of the Social Science department, which has hovered around 32 percent. 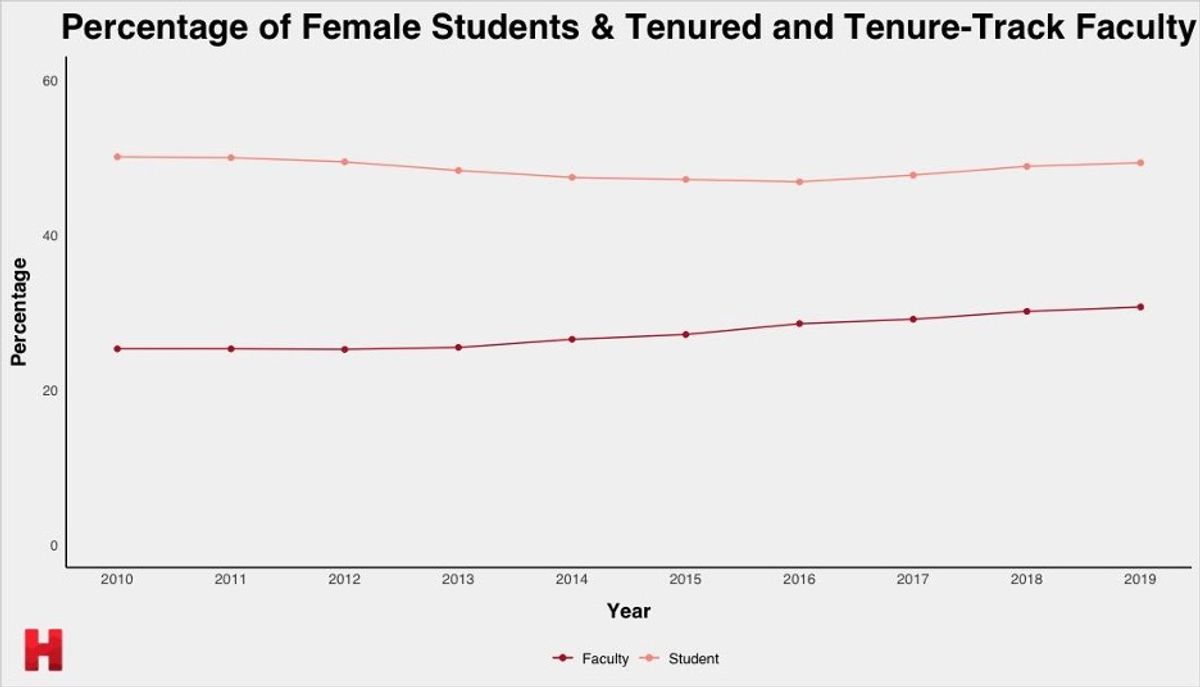 Of the 121 position offers FAS has made in the past three years for ladder positions, 49 percent have been to women.

Ladder-faculty includes Convertible Instructors, Assistant Professors, Associate Professors, Tenured Professors, Professor in Residences, and University Professors. Of those offered positions, the average offer acceptance rate for women and men has been roughly equal, suggesting that gender is not a barrier in accepting an offer for a Harvard position. Over the past five years, the Office of Faculty Affairs has supplemented efforts to hire more women with the implementation of new programs such as the Standing Committee on Women (SCW). These programs aim to create a more supportive intellectual community by providing female faculty greater opportunities for professional development.

While there has been a marked improvement in gender diversity in the past ten years, there are still ways to go to gender parity. Of the 727 total FAS faculty population, only 31 percent are women. This is in sharp contrast to the undergraduate student population which has hovered around an even 50 percent male-female split for the past ten years.

As demonstrated in the graphs above, student body diversity has greatly increased over the past 10 years—a positive change that is not mirrored throughout the tenure-track and tenured faculty body. Though some departments have shown a promising increase in URM faculty, such as the Social Science department, others were lacking, like the Physical Science department, with just 2.08 percent of the faculty identifying as URM in 2010 and 2.17 percent in 2019. Compared to the proportion of URM students, the faculty has not seen as notable an increase.

The proportion of female faculty has steadily increased, but with inconsistent change across departments. The slower change of the faculty body can be at least partially attributed to the slow turnover of tenure-track and tenured faculty. Hiring rates each year are much more limited than the number of student acceptances. Even still, there is significant room for improvement within the FAS faculty population and Harvard could do more to act on its commitments to diversity. Harvard still has a ways to go in building a diverse group of FAS staff that matches the increasing diversity of its undergraduate population.

Check out the data we used here: https://github.com/apneal0725/faculty_diversity_data

Gender Disparity in Harvard Faculty
How Diverse are Harvard Employees? A Study of Gender and Race