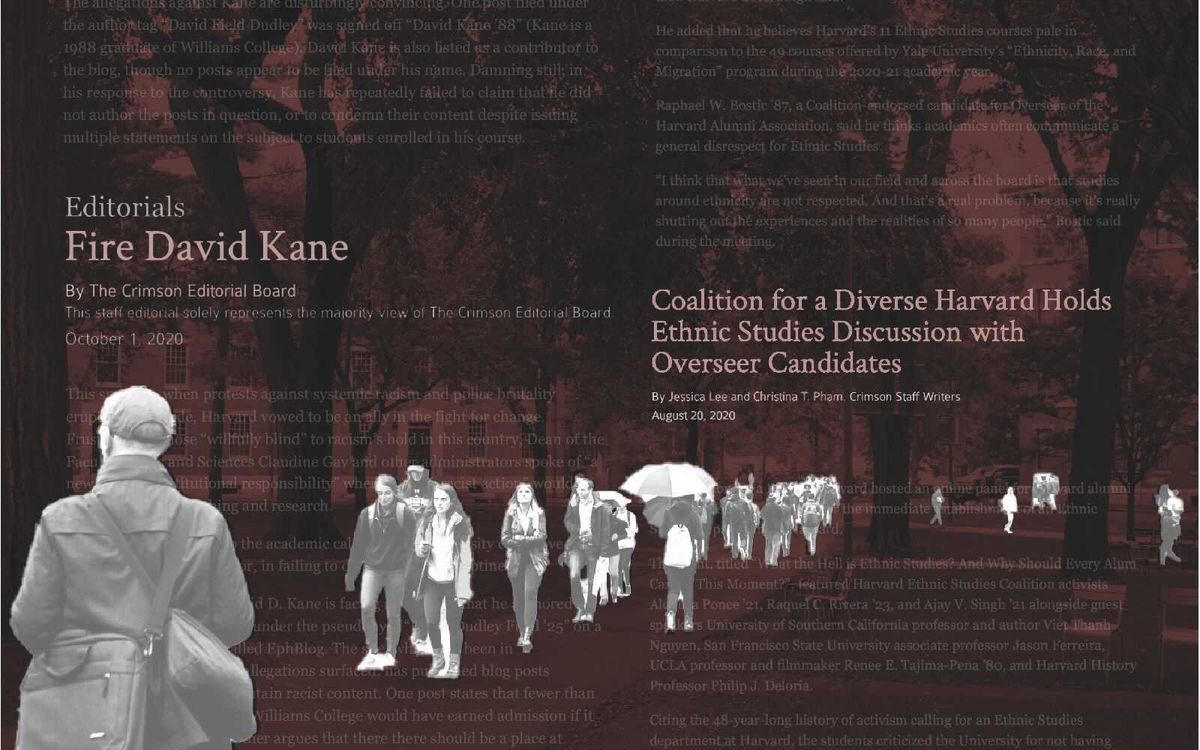 Harvard Divided: How do opinions on hot topics differ by class, concentration?

We polled undergraduates on a variety of campus issues, like the creation of an ethnic studies department and a cultural center.

In the divided political landscape of the United States, many have accused college campuses (especially those of the Ivy League) of being left-leaning echo chambers. Conservative pundits like Ben Shapiro often write them off as places where liberal professors brainwash “students to believe fervently in the tenets of liberalism.” But are they really being indoctrinated? And do Harvard students really stand that far to the left to begin with? We decided to find out ourselves. We polled Harvard’s undergraduate population on their claimed political leanings, as well as their opinions on several divisive Harvard-related topics, and disaggregated their responses based on concentration and class year.

In total, we received 288 responses, which comprises just over 4% of Harvard’s undergraduate population. One limitation of our index is that it excludes respondents who claim to have a “moderate” political leaning. This, paired with our relatively limited sample size and unequal number of respondents per each category, could have led to slightly misrepresentative index values.

When dividing the respondents based on their concentrations, both declared and prospective, we sorted them into four categories: Arts and Humanities, Engineering & Applied Sciences (SEAS), Sciences, and Social Sciences. Individuals who had interests spanning more than one category were counted once per each category of interest. The "Unknown" category consists of those who identified as "Undeclared" and those whose concentration preferences are unknown.

In terms of questions asked, almost all received a greater number of more characteristically “left-wing” responses than “right-wing” responses (we will discuss our reasoning for these categorizations later). Clearly, and perhaps unsurprisingly, the Harvard undergraduate population has quite a left-leaning tilt, but are these views instilled in Harvard undergrads over time, or are they present from the very beginning?

Right Left in the Dust 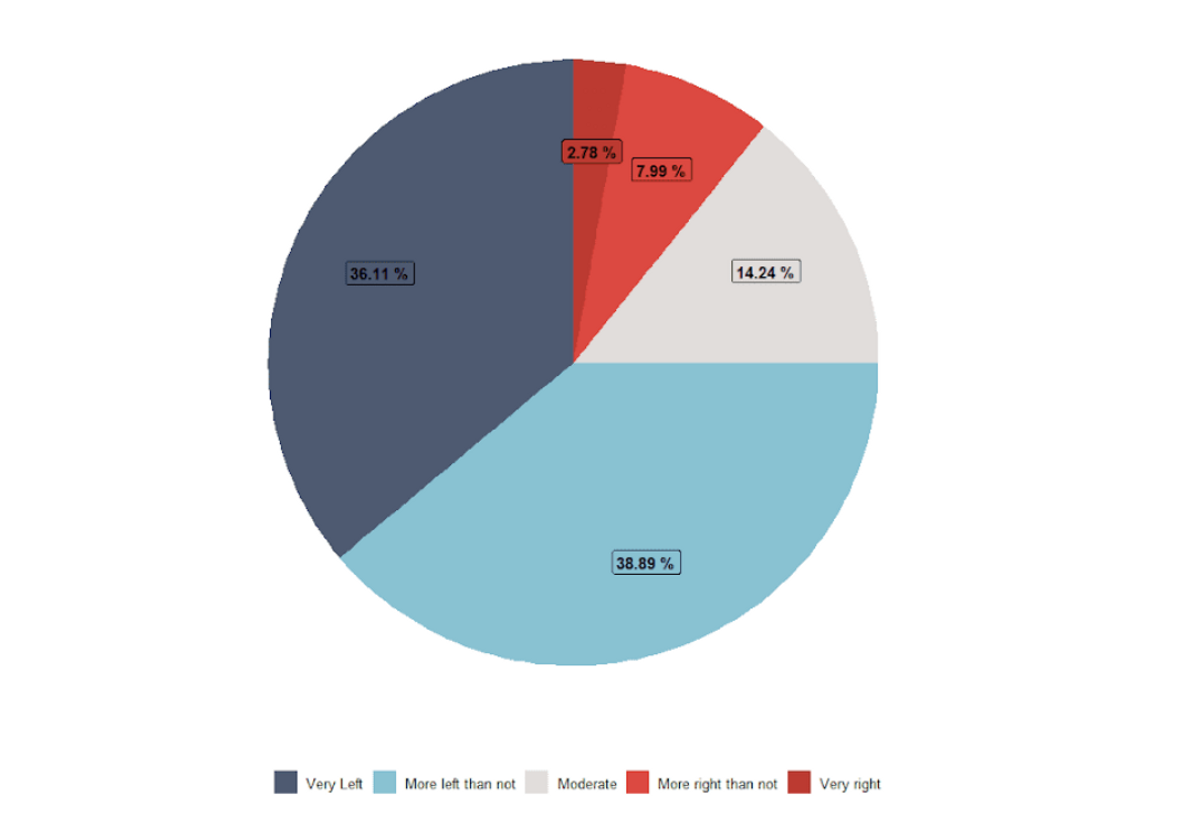 The old stereotype of the left-leaning college student seems to be true, at least at Harvard. When asked to place their political leanings along a spectrum ranging from “very left” to “very right”, exactly three fourths of students said they were left-leaning and just under 11% claimed to be right-leaning, yielding an overall index of 0.12.

While this study did not track respondents’ political standings over the full course of their years at Harvard and thus cannot can neither confirm nor disprove any claims of indoctrination on its own, these results do offer evidence that students who have been at the college longer are not more left-leaning than their younger counterparts. Furthermore, surveys from the Crimson conducted when the classes of 2021, 2022, and 2023 were freshmen yielded indices of 0.15, 0.16, and 0.14, respectively, showing the absence of a leftward shift. Again, these studies were conducted separately, with different sample sizes and individuals, so they cannot be used to draw any solid conclusions, but they still provide interesting insights into Harvard’s political climate.

Next, we surveyed students on an array of Harvard debates. We disaggregated results by students’ concentrations for issues related to academics, such as the allegations against Government preceptor David Kane and the creation of an ethnic studies concentration. We also disaggregated by year to see if there were any extreme differences.

Here is an overview of the results by year and by concentration using the aforementioned political index:

Science and Social Science concentrators tended to oscillate between more left-leaning and more-right leaning stances, with Sciences seemingly more eager to establish cultural centers and an ethnic studies department, but shying away from challenging the nearly century-old house names. The category of respondents with an unknown concentration collectively waivered back and forth between the Arts and Humanities and SEAS “extremes,” but consistently stayed within that range. 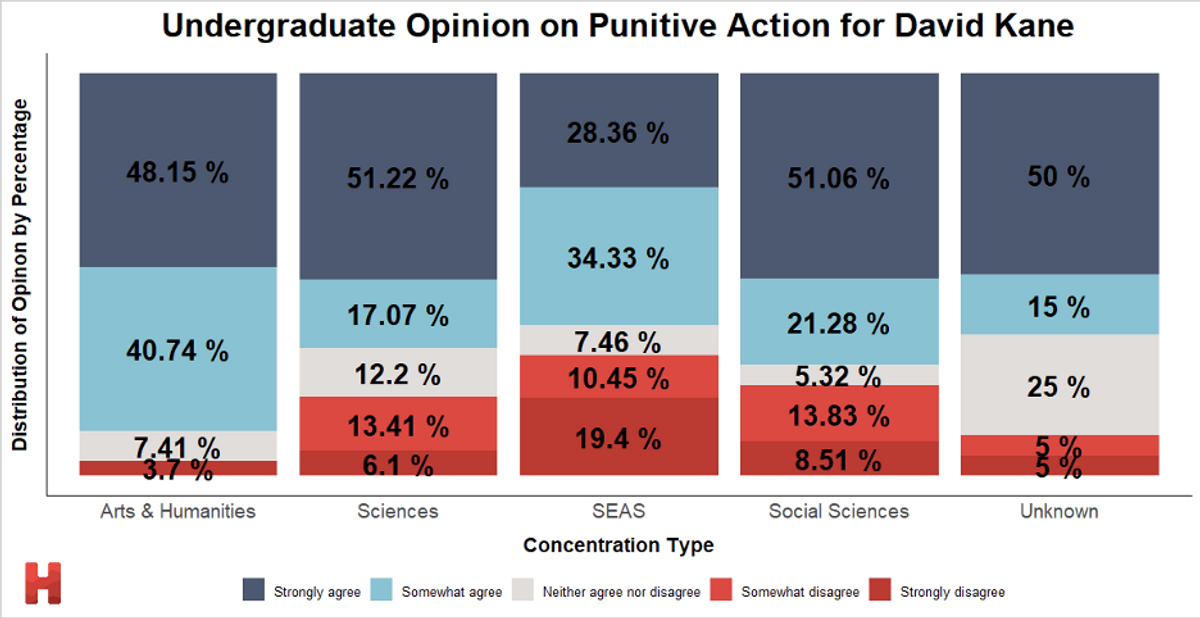 The Arts and Humanities had the largest number of students who agreed with the statement that David Kane should have been reprimanded for the series of racially offensive and morally questionable blog posts written under a pseudonym, which were linked to him earlier this year.

The posts questioned affirmative action, trivialized the use of the n-word, and argued that female college students should stop drinking alcohol to avoid sexual abuse. In addition to Arts and Humanities students, students whose concentration is unknown also housed a strong sentiment that Kane should have been punished, although fewer students possessed a strong opinion on the matter.

On the contrary, SEAS students tended to disagree most with the sentiment that Kane ought to be punished for his comments, with over a quarter of surveyed SEAS students voting in defense of Kane. In general, right-wing voices have tended to defend the use of “offensive” language more than left-leaning individuals due to their more prominent belief that it falls under the protection of freedom of speech as detailed in the First Amendment of the US Constitution, which is why we considered the defense of Kane to be a more right-wing attitude. (We also confirmed that the opinions we labelled as more right wing were chosen more frequently by students who identified as conservative, and vice-versa.) As usual, however, right-leaning opinions still constituted a minority in all categories. 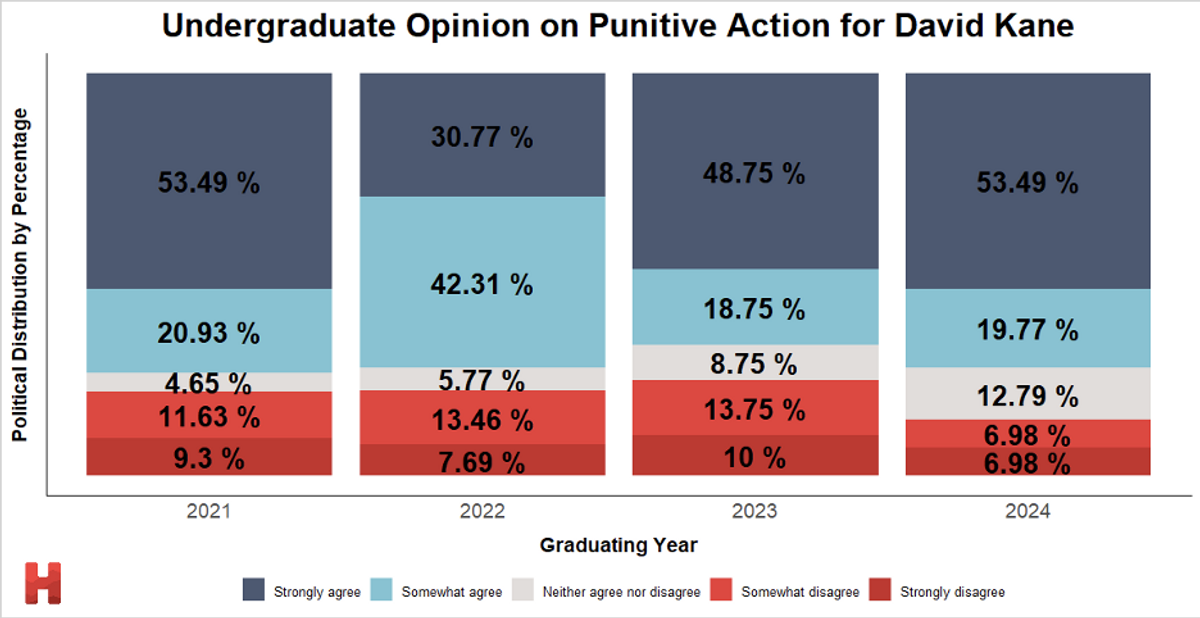 Between class years, there was comparatively little variation in response to the question of David Kane’s fate compared to between concentration categories. The class of 2024 seemed to have a somewhat lower percentage of students who disagreed with the idea of punishing Kane, as well as the highest percentage of students who believed he should face punishment, showing that it is slightly more left-leaning than average, although not by a dramatic margin. Also interesting was the class of 2022’s lower percentage of those strongly believing that Kane should have been disciplined, though the total percentage of those favoring discipline for Kane was similar to other class years. 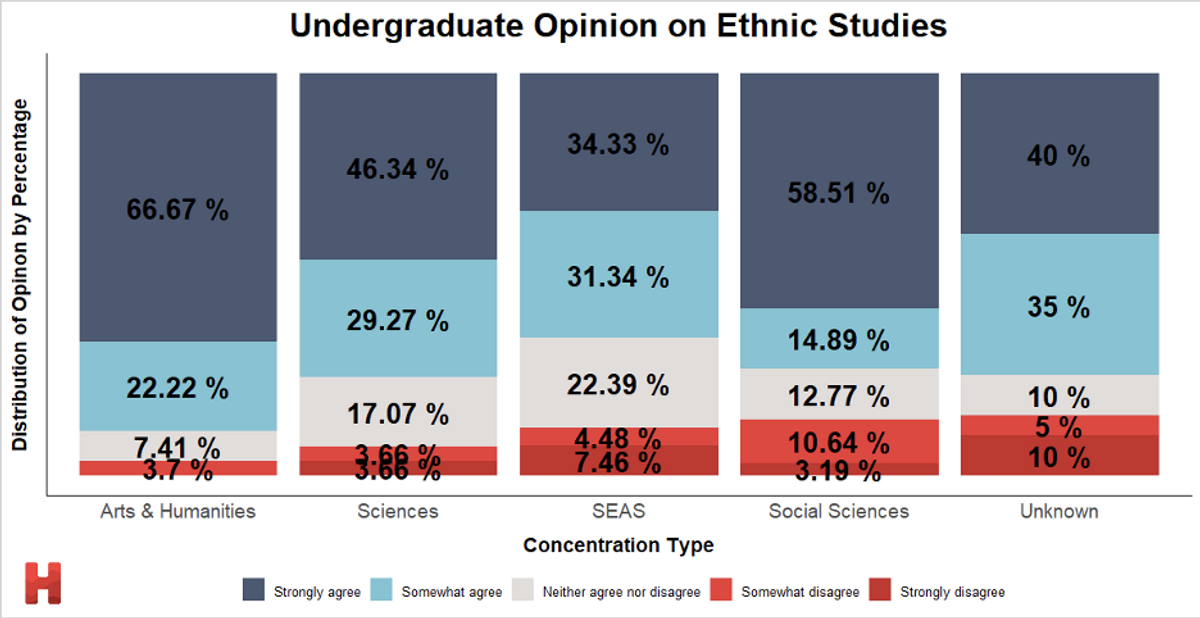 One of the biggest issues on campus currently concerns the creation of an Ethnic Studies department, since once does not currently exist at Harvard. Proponents argue that Ethnic Studies is a valuable field that will help students learn more about the vast array of ethic diversity our world has to offer, while opponents argue that the money and effort would be best allocated somewhere else. This question appeared to be a bit less contentious than most, as there was a notably high degree of support in favor of creating an Ethnic Studies department. One thing to note, however, is that respondents in Arts and Humanities concentrations seemed to have especially strong support for the creation of the department.

We considered the opposition of Ethnic Studies as a more right-wing stance, since right-wing politicians and other influential right-wing figures have in general voiced disapproval towards it as a waste of time and money for colleges.

Again, with concentrations, the general trend emerges once more: SEAS had the highest rate of right-leaning responses, while Arts and Humanities had the lowest, followed by students with unknown concentrations, although the majority of students in all categories still supported the establishment of an Ethnic Studies department.

Rolling in their Graves

Over the past few years at Harvard, there have been growing calls to rename buildings whose namesakes were racists and/or slaveholders such as John Winthrop, Louis Agassiz, Henry Dunster, and Increase Mather. 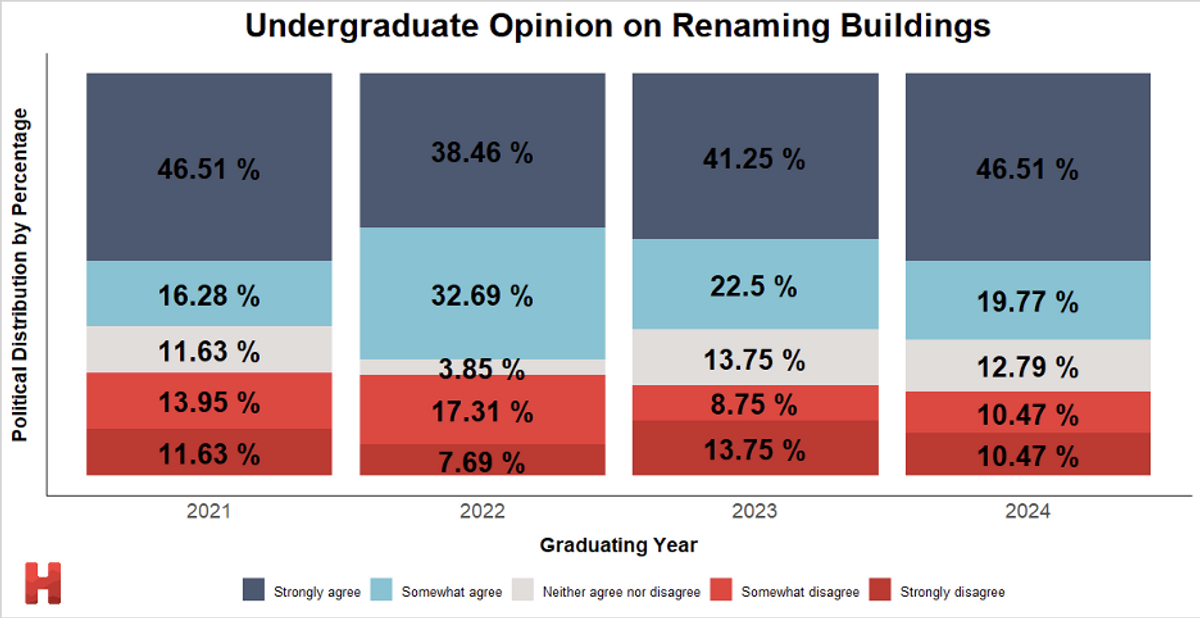 There was a particularly low level of variation in responses between the class years on the subject of building renaming, with the group most against renaming buildings being the class of 2021, though the class of 2022 was not far behind. Interestingly, the class of 2022 also had the most people overall in favor of renaming buildings, indicating a higher degree of polarization than the other classes on this issue. Overall, this question tended to produce a higher than normal degree of right-leaning responses, indicating that this question is one of the more controversial among the student body.

Other Ivy League institutions such as Yale have provided cultural centers to act as social and community bases for students of various cultural or ethnic backgrounds. There have been calls for Harvard to establish these spaces as well, although some right-wing people have denounced such centers. 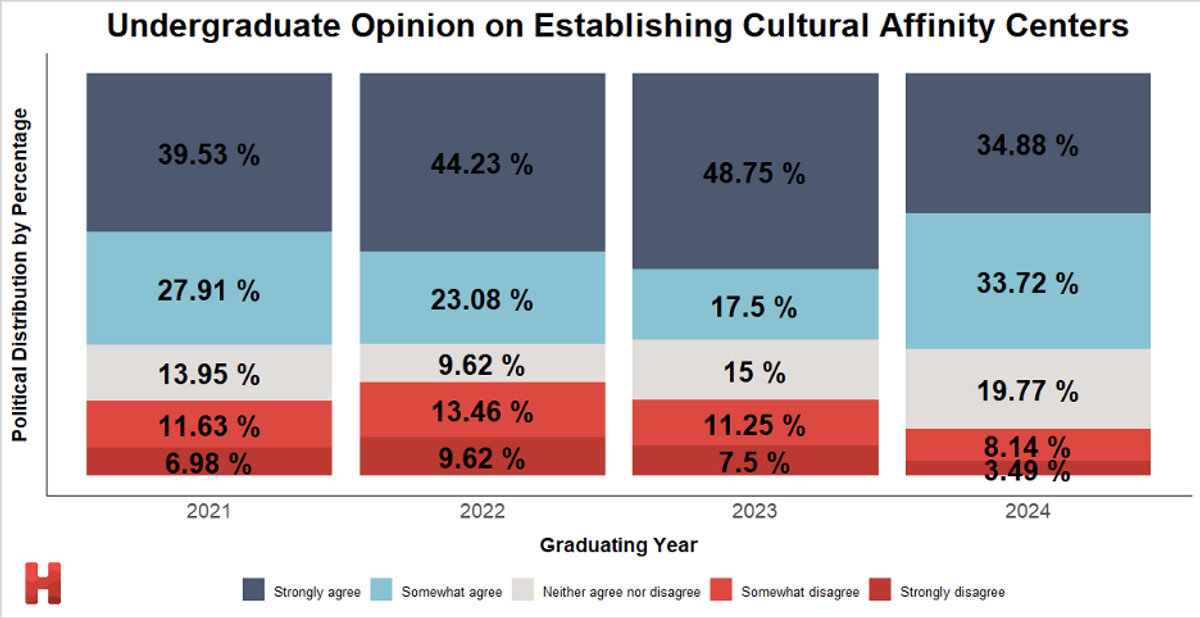 As for class years, there was no significant difference in the proportion of left or right-leaning responses, although the class of 2024 appeared to be slightly more left-leaning than average, at least for the questions we asked.

Our results also showed a lack of variation in opinion between class years at Harvard and that all class years are overwhelmingly left-leaning. We even found slightly higher proportions of students with right-leaning opinions among upperclassmen, suggesting that accusations of leftist indoctrination at elite institutions may be unfounded, at least at Harvard.

Eventually, we hope to conduct a larger-scale study which will more fully encompass the entire student body. Ideally, we would conduct such a study on an annual basis in order to track the aggregate change in beliefs of each class over time.

While these results merely graze the surface of the incredibly dynamic machine that is Harvard’s student body, we hope that our work provides at least some insight into the values and beliefs of students at this crazy place we call home. 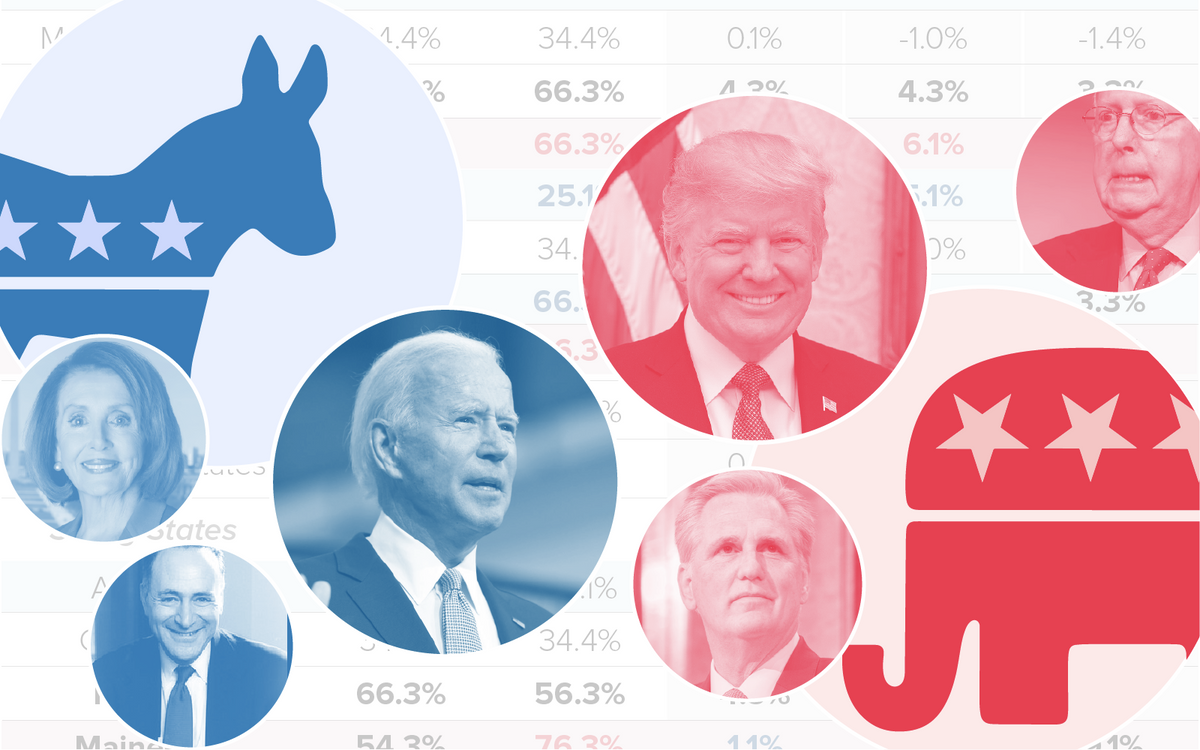