In September 2019, Act on a Dream, an immigrants’ rights advocacy group on campus, held a rally calling for the abolition of Immigration and Customs Enforcement (ICE). The Harvard Crimson, reporting on the event, contacted ICE for comment after the protest. Act on a Dream argued that this request for comment endangered undocumented students on campus by bringing ICE’s attention to the protest, which was attended by undocumented students. In response, multiple student organizations, led by Act on a Dream, announced that they would refuse to comment on Crimson stories until the newspaper apologizes and changes their policy on reaching out to ICE for comment. An online petition condemning the Crimson has also reached more than 900 signatures as of writing. The situation prompted a response by Crimson leadership, and garnered attention in national news outlets.

With vocal arguments from both sides, we wanted to see where Harvard students stand on the issue.

To gauge Harvard students’ opinions, we sent a poll to the HODP survey group, an opt-in group that Harvard College students can join to receive surveys. Of the 295 students in the HODP survey group, 118 responded. Of the students who responded, 10.2% of students identified as Hispanic and/or Latino, 7.6% as Black or African American, 34.4% as Asian, and 54.2% as White (these percentages do not add up to 100 because some respondents identified with multiple races). Since these demographics do not exactly reflect the demographics of the College, we report responses weighted by ethnicity at the end of the article.

We began the survey by asking how familiar students were with the controversy. We then asked four questions to gauge students’ opinions on a variety of issues surrounding the recent controversy. We tried to structure the questions not to encourage a specific type of response and to provide no more context than necessary: our goal was to gauge the current opinion of students, not what they would think if they were given more information. Finally, we asked respondents for any comments that they might have on the issue to gain additional insight into the rationale for student responses.

How much people know

Almost everyone who responded to the survey expressed at least some familiarity with the Crimson controversy, with only 1.5% of respondents reporting that they were “not at all familiar.” Many of the respondents also expressed greater degrees of familiarity, with nearly 80% of respondents considering themselves moderately or very familiar. This was likely due, in part, to response bias. Students who were entirely unfamiliar would be less likely to respond to a survey about the issue, but these results nonetheless suggest that many students on campus are well-aware of the Crimson-ICE controversy.

Was the Crimson correct? 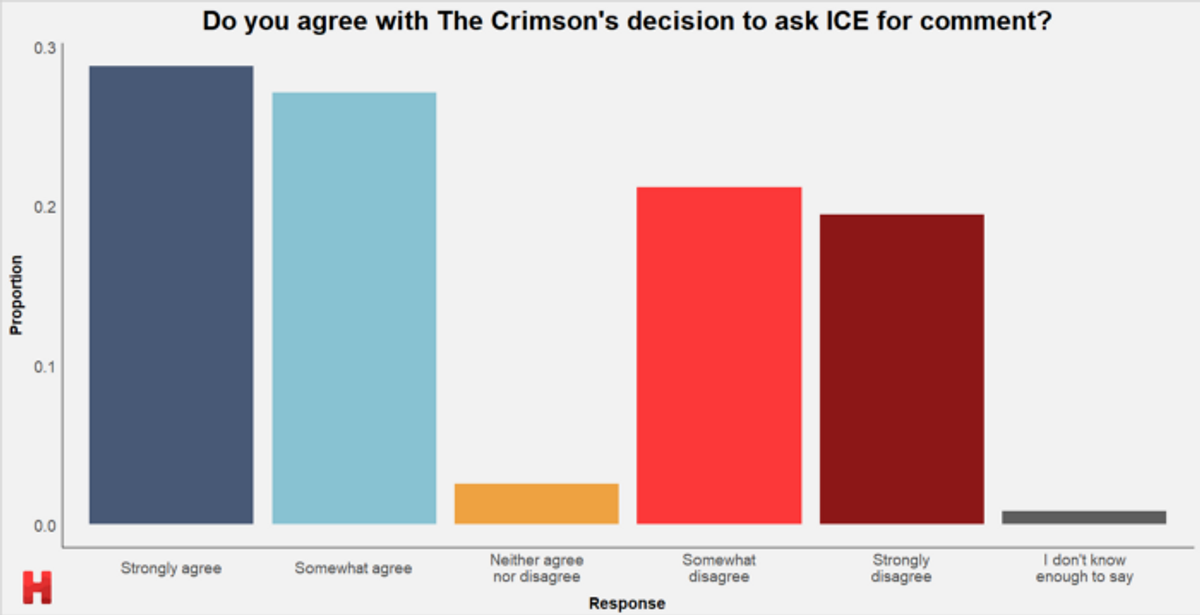 These results are perhaps surprising given the number of student organizations who have announced that they will boycott The Crimson (18 have co-sponsored the petition) and the stances many UC presidential tickets have taken against The Crimson. This suggests that there is a significant proportion of students who support The Crimson, but that they have been much less vocal than students who oppose the newspaper’s actions.

Did the Crimson endanger undocumented students?

One of Act on a Dream’s core arguments is that the request for comment from ICE endangered undocumented students on campus. While it is difficult to empirically verify the claim that The Crimson’s request increased the risk posed to undocumented students on campus, we do have data showing that these fears are not without good cause. ICE removals in the Boston Area of Responsibility have increased by over 70% since 2016, which is likely due to policy changes by the Trump administration, although this is notably still fewer removals than in 2013. 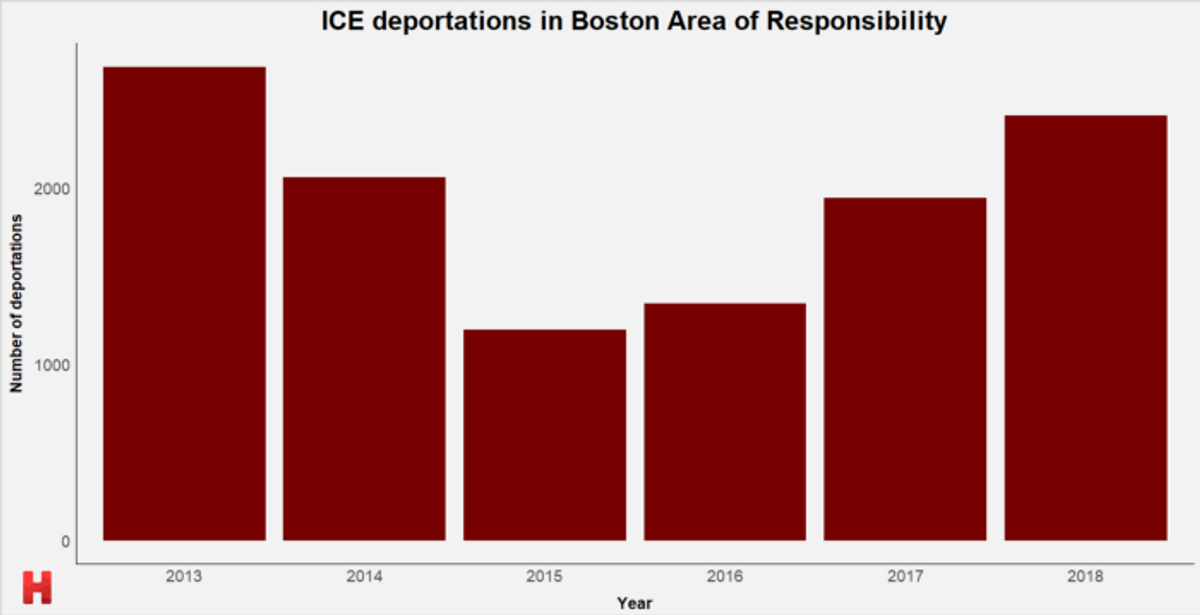 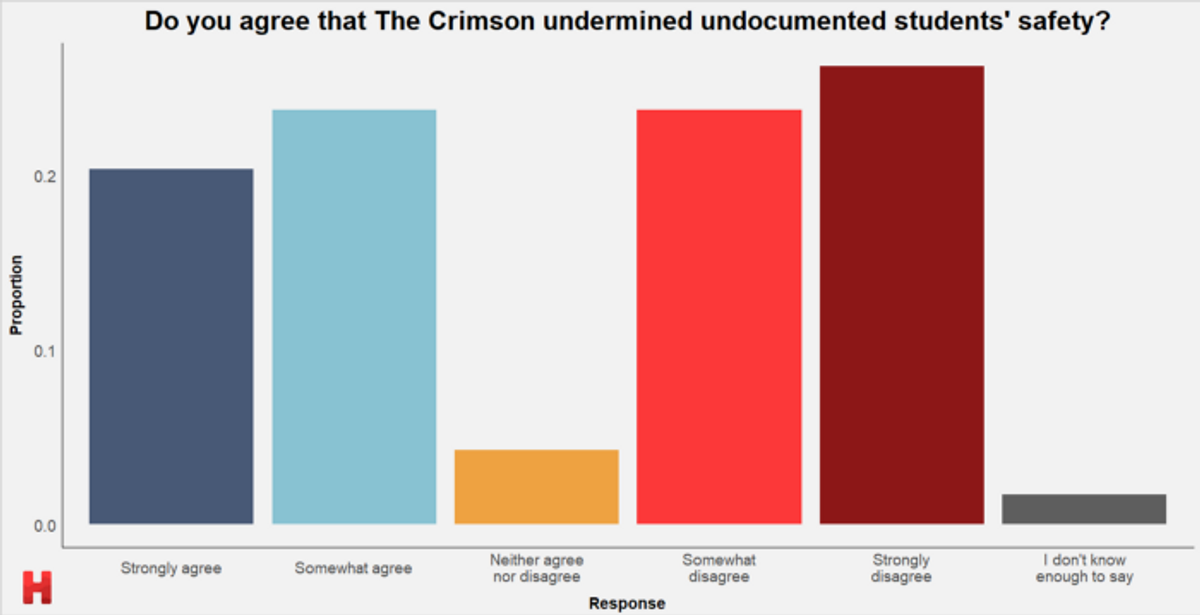 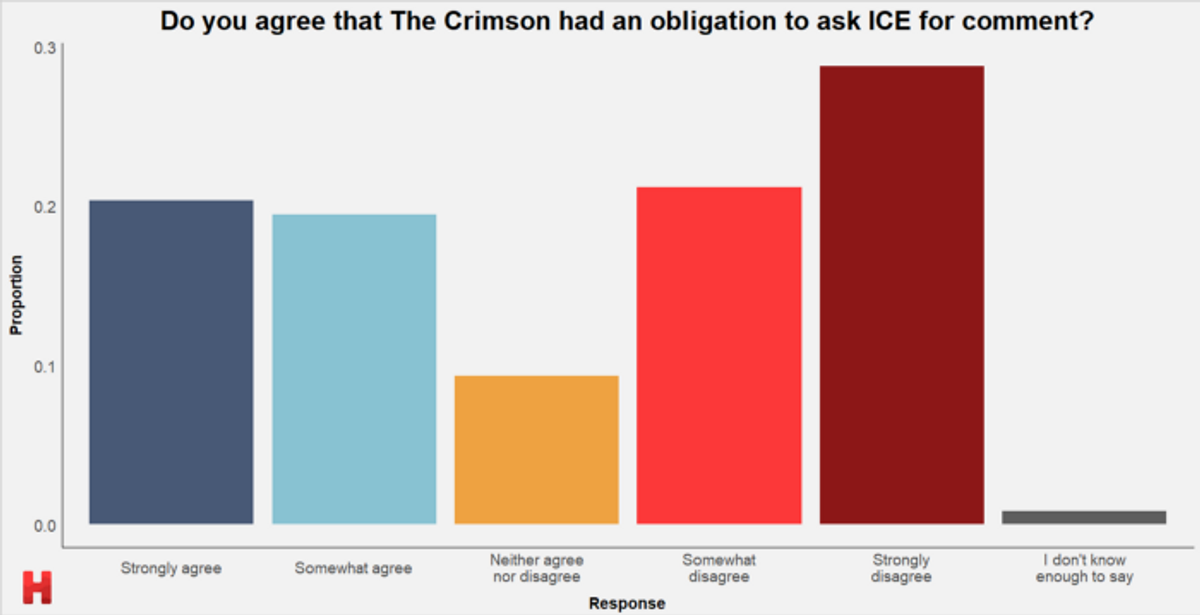 Journalistic obligation has been the main defense that The Crimson and many of its supporters have offered to justify the policy of contacting ICE. However, it seems that many respondents in our survey were not persuaded by that argument. What is curious is that even though most students do not believe that The Crimson had an obligation to contact ICE, they still think that The Crimson was correct to do so.

Boycott of The Crimson

In response to the Crimson’s decision to ask ICE for comment, a group of student organizations at Harvard has indicated that they will not comment on articles until The Crimson apologizes for contacting ICE and revises its policy on requesting comment from ICE in the future. This group of organizations, led by Act on a Dream, includes some of the largest student organizations on campus, such as the Harvard College Democrats, Harvard Women in Computer Science, and the Phillips Brooks House Association. 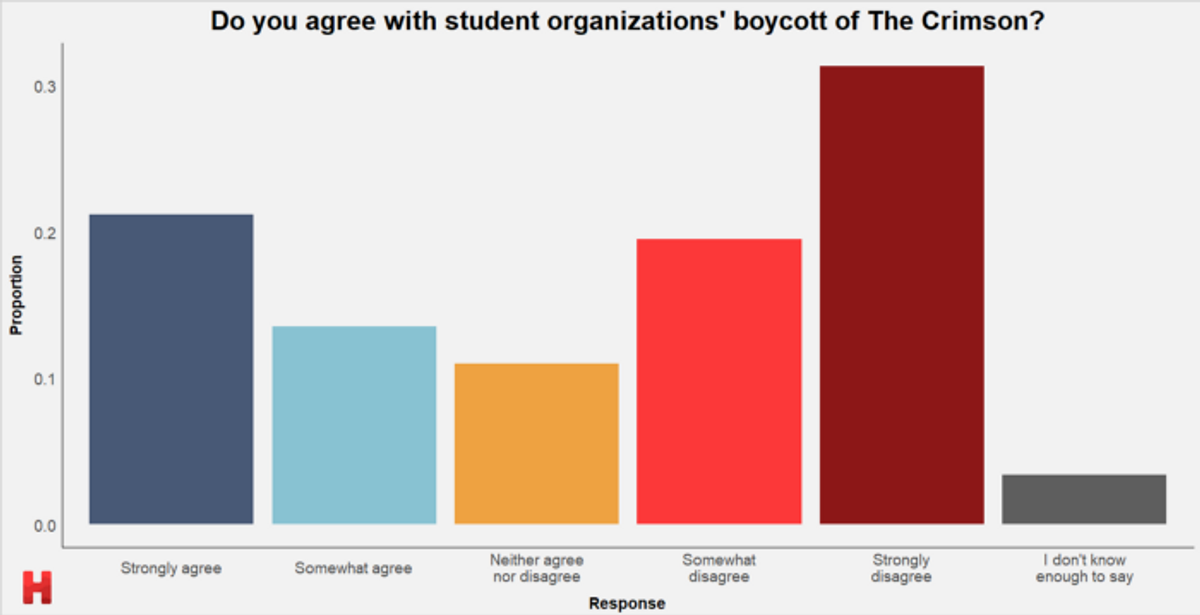 To better understand the perspectives of students, we asked respondents for any additional comments they had. We believe that many of these comments provide insight into the thought process of students on campus, so we display them in anonymized form. Of the 118 people we surveyed, 24 offered additional comments, indicating passionate opinions on both sides of the issue.

One respondent argued that the main issue with The Crimson’s actions was not that they asked ICE for comment, but that they did not inform members of Act on a Dream, who agreed to comment for the article, that ICE would be contacted:

"They were right to ask ICE for comment, but wrong to use AOD’s comments without informed consent about asking ICE."

Many expressed general agreement with Act on a Dream’s position on ICE, but did not believe The Crimson to be at fault for their actions.

"I totally support [Act on a Dream’s] cause and was actually present at the Abolish ICE Rally. But, criticizing a media organization for doing their routine jobs of getting comment is just as undemocratic and vile as what ICE is doing."

Others took issue with The Crimson’s response to the controversy,

"Students have faced harassment from total strangers, and national publications have vilified students on campus after the Crimson Leadership blasted out their `Note to Our Readers.`"

Finally, some students felt like arguments on both sides were problematic.

A note on methodology

Our goal for this survey was to, as best as possible, gauge the opinions of Harvard students on the recent controversy. However, it is important to caution that our results may not be fully reflective of opinion on campus.

First, students with strong opinions on this topic were probably more likely to respond, so it is very possible that many members of our survey group do not have particularly strong opinions either way, and did not fill out the survey as a result.

Second, our survey group itself is not fully representative. While we believe that our sample size is large enough to offer some insights into the views of the student body, it is still only a small proportion of the overall student body. Furthermore, our survey group is comprised of students who voluntarily agreed to fill out surveys for HODP, which may not be representative of all undergraduates. Our survey was also not ethnically representatives, so we offer response statistics in the link below weighted by ethnicity, as well as the response statistics within each ethnicity.

Our results indicate that there is more support for The Crimson among students than might be initially thought, given the widespread criticism of the newspaper by student organizations and activists. However, our results also suggest that opinion of the issue is more complex than simply supporting or opposing The Crimson. Even among the students who believe that The Crimson was correct to request comment from ICE, some nonetheless believe that the request may have increased the risk to undocumented students on campus or do not believe that The Crimson had an obligation to contact ICE. Overall, our survey shows that campus opinion is widely divided, with many students on both sides holding strong opinions on the issue.

We want to thank the many Harvard students who voluntarily registered to be a part of the HODP survey group and offered to provide their opinions on campus issues. If you are a Harvard College student interested in contributing to future analyses through the Survey Group, please sign up here. Thank you!

Note: This article is intended to provide insight into Harvard students’ views on the Crimson-ICE controversy. The opinions expressed here do not necessarily reflect the views of HODP as an organization, or of any of its members.