Is there a Harvard archetype?

A look at the MBTI personality types of Harvard students.

Is there a “Harvard type”? Stereotyping suggests yes: we’re a school of smart, competitive, goal-oriented, type A students, by necessity of the application process. Just how true is this stereotype, though?

To find out, we turned to the Myers-Briggs Type Indicator (MBTI) test, a self-report questionnaire designed to identify a person's personality type, strengths, and preferences. The original MBTI test created by Isabel Myers and Katharine Briggs in the 1980s is a $49.95, 93-question affair. For the purpose of the survey, we used a popular free alternative: 16 Personalities. As the name suggests, the test sorts individuals into 16 personalities, each composed of four letters. Each letter is meant to represent a dimension of your personality:

Together, they represent a personality type. For example, an ENTP individual would be extroverted, intuitive, a thinker, and a perceiver. We surveyed 222 students about their personality type, as well as other basic biographical info such as gender and grade, in order to see if there really is a “Harvard” personality.

Distribution of Personality Type at Harvard:

The most common personality type by far was INFJ, or what 16 Personalities call the Advocate. Composed of Introverted, Intuitive, Feeling, and Judging personality traits, and characteristized by their deep thoughtfulness and imagination, Advocates stand up for what’s right. According to 16 Personalities, “Advocates leave their mark on the world. They have a deep sense of idealism and integrity, but… they take concrete steps to realize their goals and make a lasting impact.” That sounds like Harvard students to us! INFJ’s are the least common personality type worldwide, which may be indicative of why all of these students end up at one of the most selective schools in the country.

Meanwhile, tied for last are ESTP and ISTP, the Entrepreneur and the Virtuoso, respectively. The former is supposed to be very energetic, creative and sociable, while the latter is more independent and crafty, with a passion for figuring out how things work. 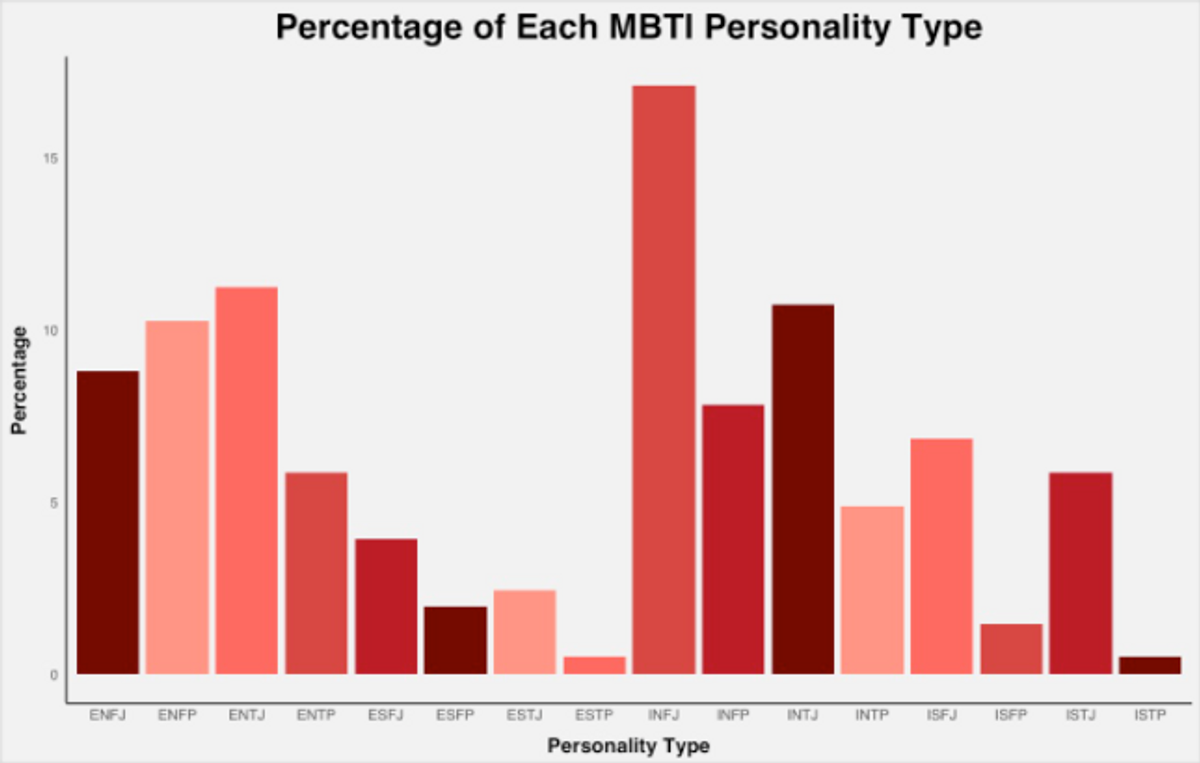 The above graph displays the percentage of each MBTI personality type at Harvard College who participated in our survey.

Distribution of Personality Letter by Gender at Harvard:

Due to a gender imbalance in the people with the people who filled out the survey, with most respondents identifying as female, the conclusions we can draw from the results are limited.

There are, however, two noteworthy patterns in the “S or N” and “T or N” categories, with little variation in the other two. The most common letter for female respondents was S, sensors who enjoy facts and focus on the physical reality. By contrast, more male respondents identified with N, intuitives who prefer the abstract.

In the next category, the most common letter for male respondents was T, thinkers who enjoy processing information analytically. By contrast, between Thinker and Feeler, more women identified as a feeler, or someone who uses emotions to guide decision-making. This breakdown seems to fall along traditional, stereotypical lines.

There were too few respondents who identified as non-binary or other to draw any meaningful conclusions for those categories. 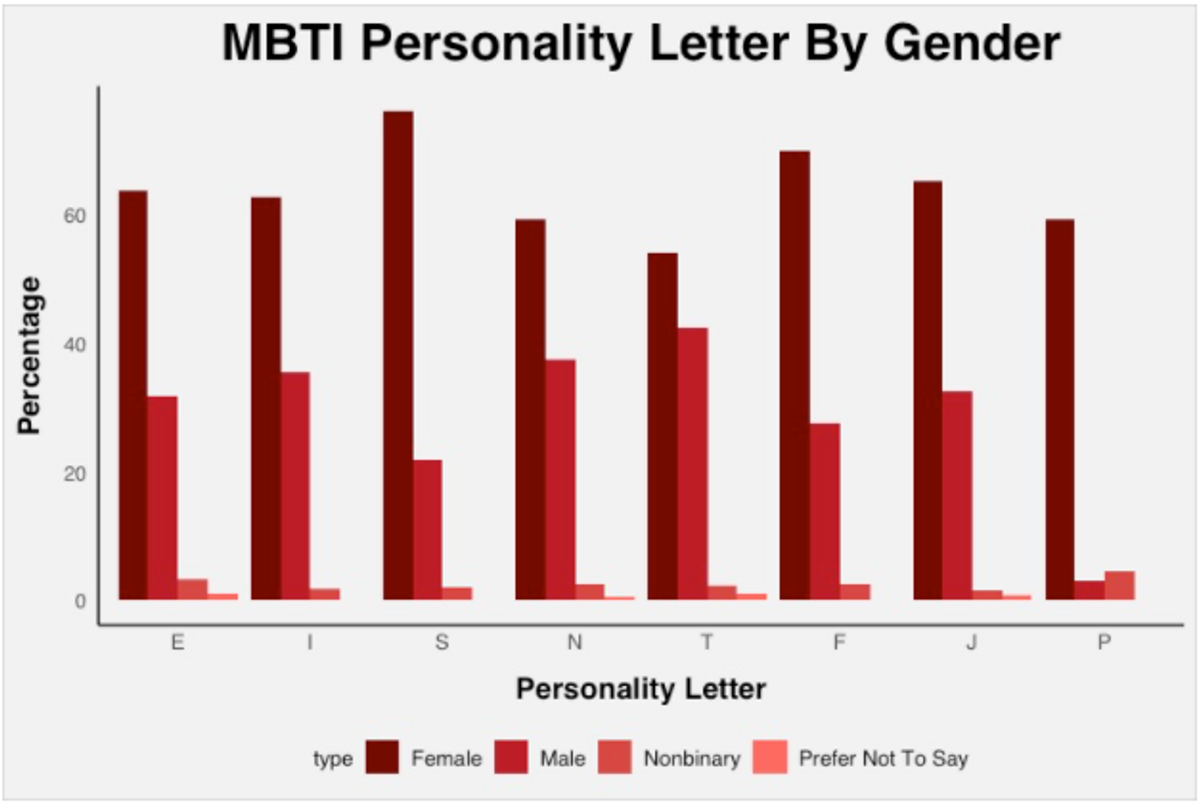 The above graph displays the percentage of each personality letter at Harvard College by gender.

Distribution of Personality Letter - Harvard vs. the World:

As might be expected, the distribution of Harvard students’ individual MBTI letters also diverged from the worldwide distribution of MBTI letters. Unlike the general population, Harvard students were much more likely to be intuitive (N) than sensing (S). The intuitive Harvard undergraduates prefer imagining the future and thinking about a problem first, as opposed to sensing individuals who prefer straightforward reality and working with facts. Harvard students are also generally more inclined to be judging than the general population, favoring the neat and structured over the flexible and adaptable. Finally, the proportion of Harvard undergraduates who are introverts—meaning they gain energy from being alone or in small groups—is higher than the general population. 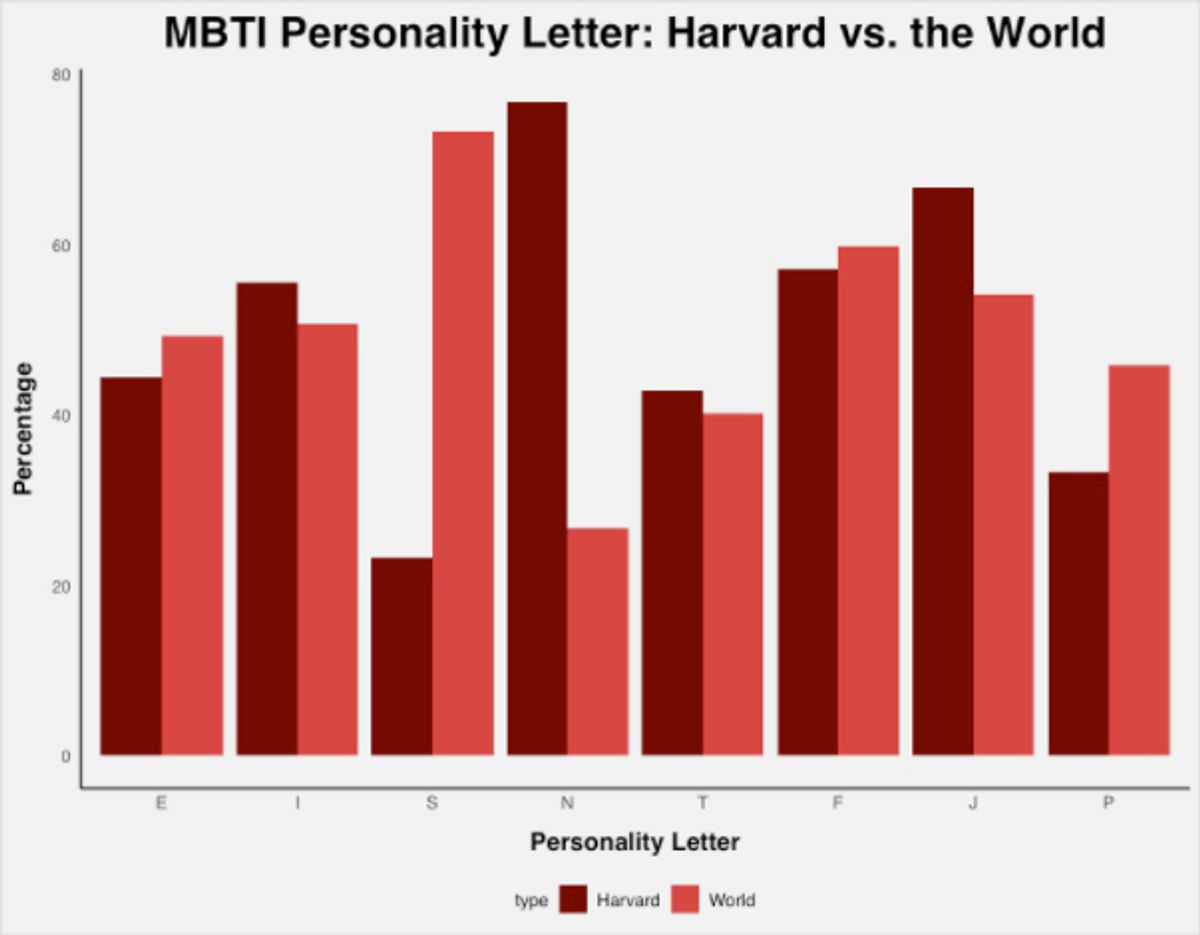 The above graph displays the percentage of each personality letter at Harvard College versus the world average.

The scientific validity of personality categorizations is frequently questioned, but they hold an irresistible allure for many. “I was honestly shocked how accurate it was. I teared up a bit because it was like there was a person looking inside my mind and telling me what they saw,” said one reviewer of 16 Personalities.

Looking inside the minds of Harvard students, there seems to be a shadow of a “Harvard type.” The students we surveyed tended to be more intuitive, more introverted, and more judging, than the global population. How these results translate into the Harvard population at large, however, would require more extensive surveying. Our sample size was too small to be statistically significant, but it provides an interesting glimpse at the possible breakdown.

So is there a Harvard type? Maybe, or maybe not. What we do know is that there are certainly people of a variety of types and personalities at Harvard. At a school committed to educating the “citizen leaders” of the world, there is some comfort in knowing that leaders do not all have to act the same.