Here’s What Successful UC Presidential Candidates Had in Common

Trends from past UC Presidential elections, and what we can tell about this year’s contest… before campaigning even starts!

This year, three tickets are vying to be the next President and Vice President of the Undergraduate Council (UC), Harvard’s top student government post. Victor Agbafe & Michael Bervell, Conor Healy & Parth Thakker, and Catherine Zhang & Nicholas Boucher have thrown their hats in the ring.

Last year, the Harvard Open Data Project used surveys and social media data to correctly predict the outcome of the UC Presidential election. We’ll do a similar project this year (stay tuned!), but we want to take it a step further — we want to see what we can learn about the election before campaigning even starts.

To figure out who the favorites might be heading into the campaign, we at HODP dove into past election data. Popular election of UC presidents began in 1996, but until 2005, presidents and vice presidents were elected separately. Though there is lots of interesting data from before 2005 (including a presidential campaign by CS50 Professor David Malan), HODP’s analysis is only based on the 2005–2016 elections, since these have the same rules as the current electoral system.

In this article, we’ll look into what past results can tell us about this year’s race.

According to The Harvard Crimson, by 2007, no UC presidential candidate without prior UC experience had ever won. Since then, the results have been remarkably similar. The only UC outsider to win the presidency has been Samuel Clark, who in 2013 rode to power on a joke ticket that promised to resign immediately upon being elected.

The UC has been popularly electing presidents for 21 years. But only once, in 2013, has a presidential candidate without prior UC experience won the top spot in Harvard’s student government.

In addition, since 2005, 11 of the 12 winning vice presidential candidates have had UC experience. The only exception was Clark’s running mate, Gus Mayopoulos. 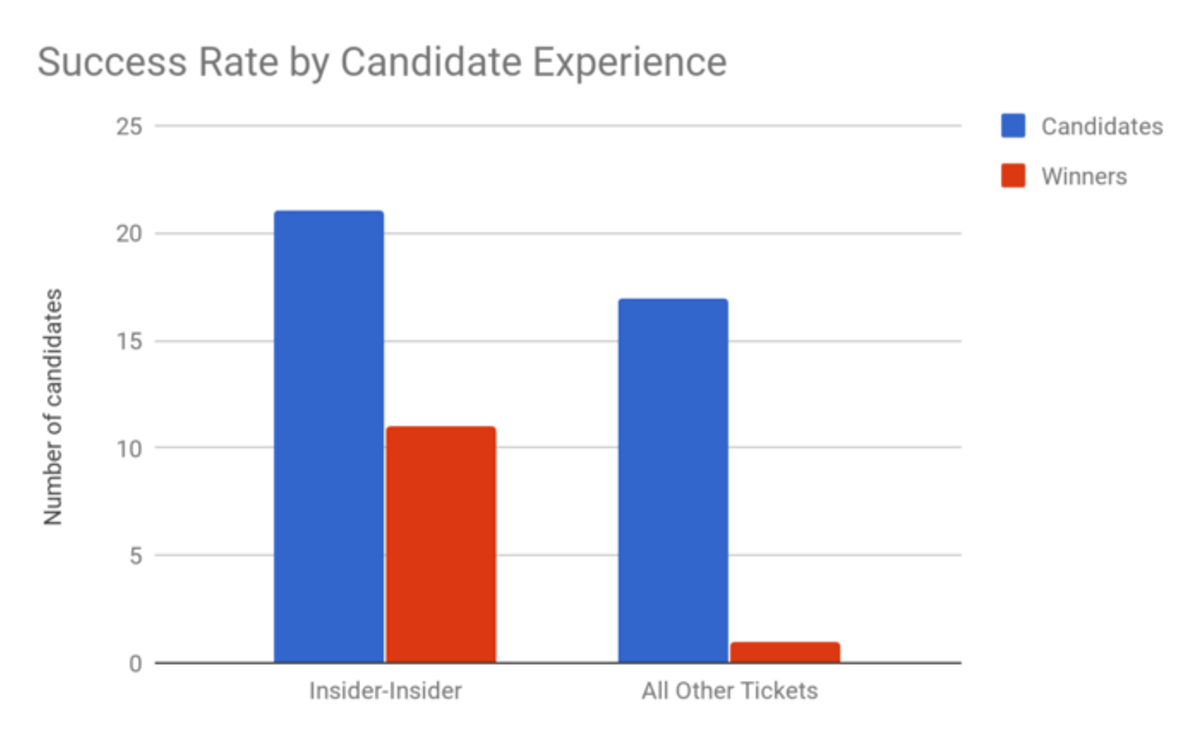 Tickets in which both candidates have prior UC experience (“Insider-Insider”) tend to perform better in the presidential election.

Obviously, these results do not mean that a ticket with an outsider candidate can’t ’win. Our sample size is small, and past results do not guarantee future ones. Plus, a pair of candidates without any UC experience showed in 2013 that outsiders can win. And let’s not forget Donald Trump, who won the American Presidency in 2016 with zero prior governmental experience.

All in all, our findings on experience aren’t perfect, but they indicate an advantage for experienced tickets.

Class year matters… but less than you might think

Juniors have dominated UC elections. In 11 of the past 12 years (or 91.7% of elections), the UC President and VP have both been juniors. (In the other year, 2006, the President was a junior but the VP was a sophomore.)

Since 2005, no non-junior has ever been elected UC President. And only once, in 2006, was a non-junior vice presidential candidate elected.

These data would suggest that students look for UC Presidents that have spent more time at Harvard, possibly because that gives them a deeper knowledge of the institution. (Why juniors and not seniors? UC Presidential terms are for a calendar year, so seniors usually can’t run, because by the time they take office in the spring they only have 1 semester left.)

But the junior advantage might not be all that surprising. The vast majority (94.7%) of presidential candidates and most (81.6%) of the vice presidential candidates are juniors, so there’s a pretty limited pool of non-juniors who could win to begin with! So, to us, it’s unclear whether number of years at Harvard is a significant factor in electoral outcomes.

Advantage: nobody. This year, all six of the presidential and vice presidential candidates come from the junior class, so this class year advantage does not make an impact. It’s worth noting, though, that Parth Thakker is a social senior (originally class of ’18, now ‘19). 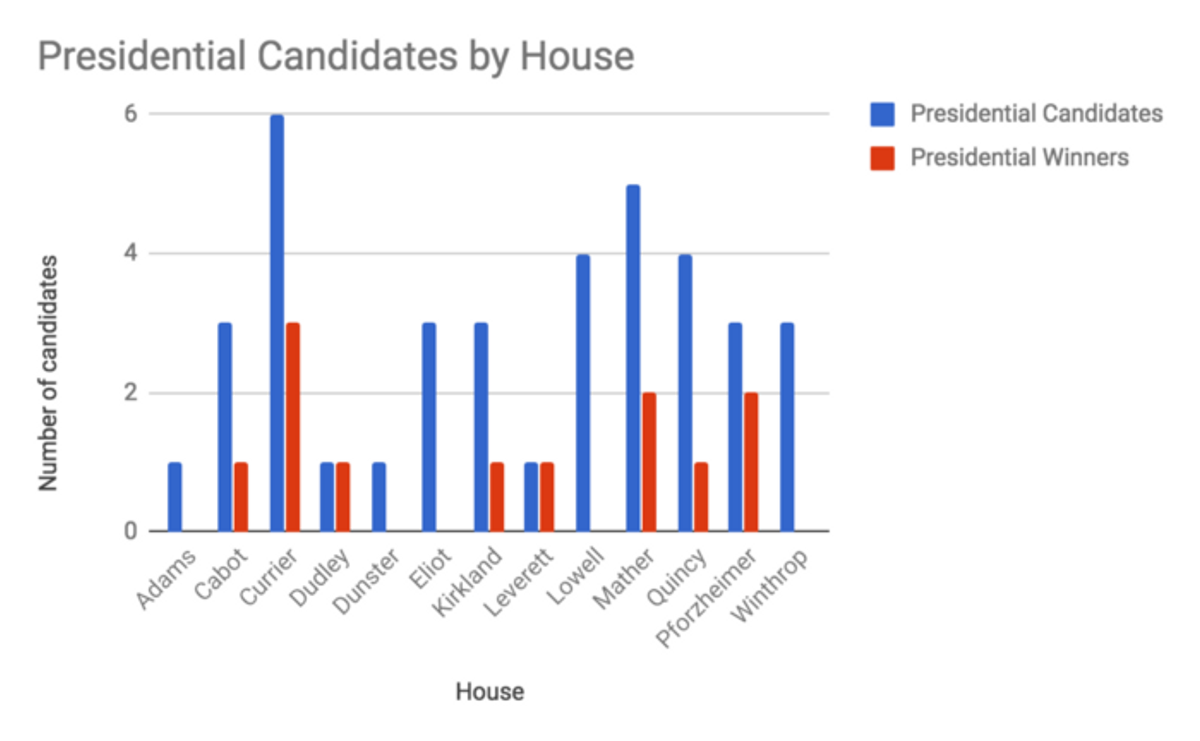 The number of presidential candidates and winners by house. 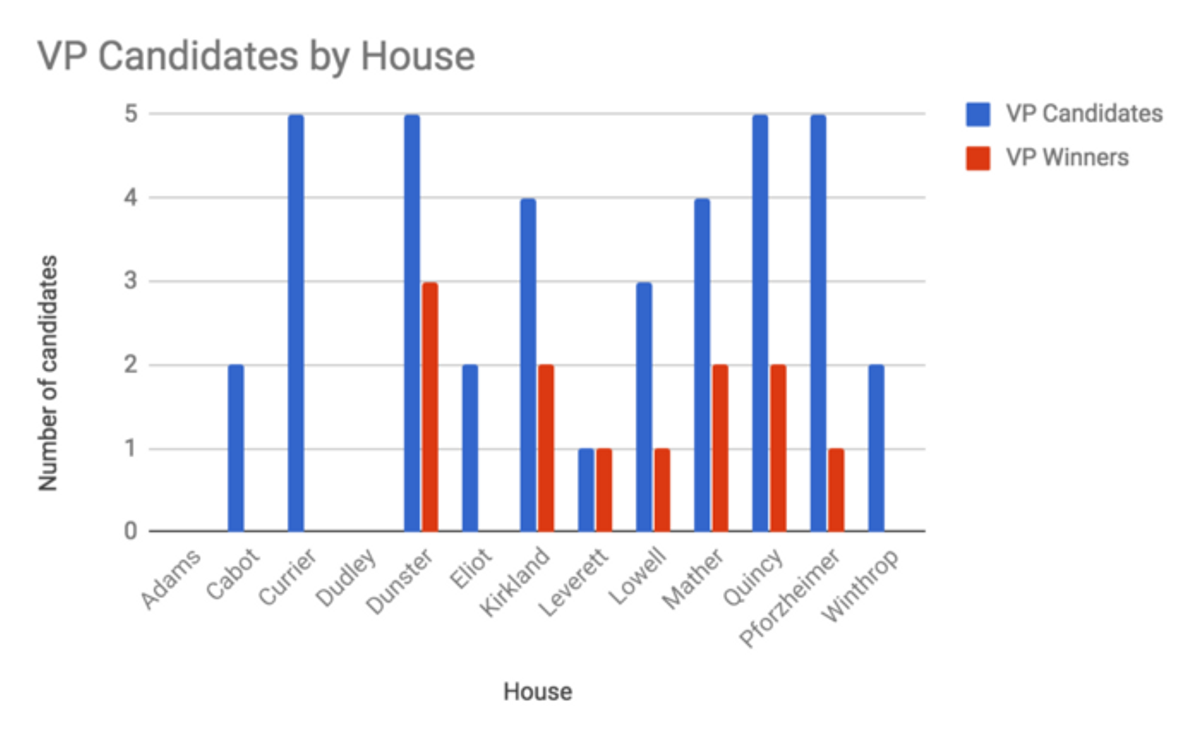 The number of vice presidential candidates and winners by house. 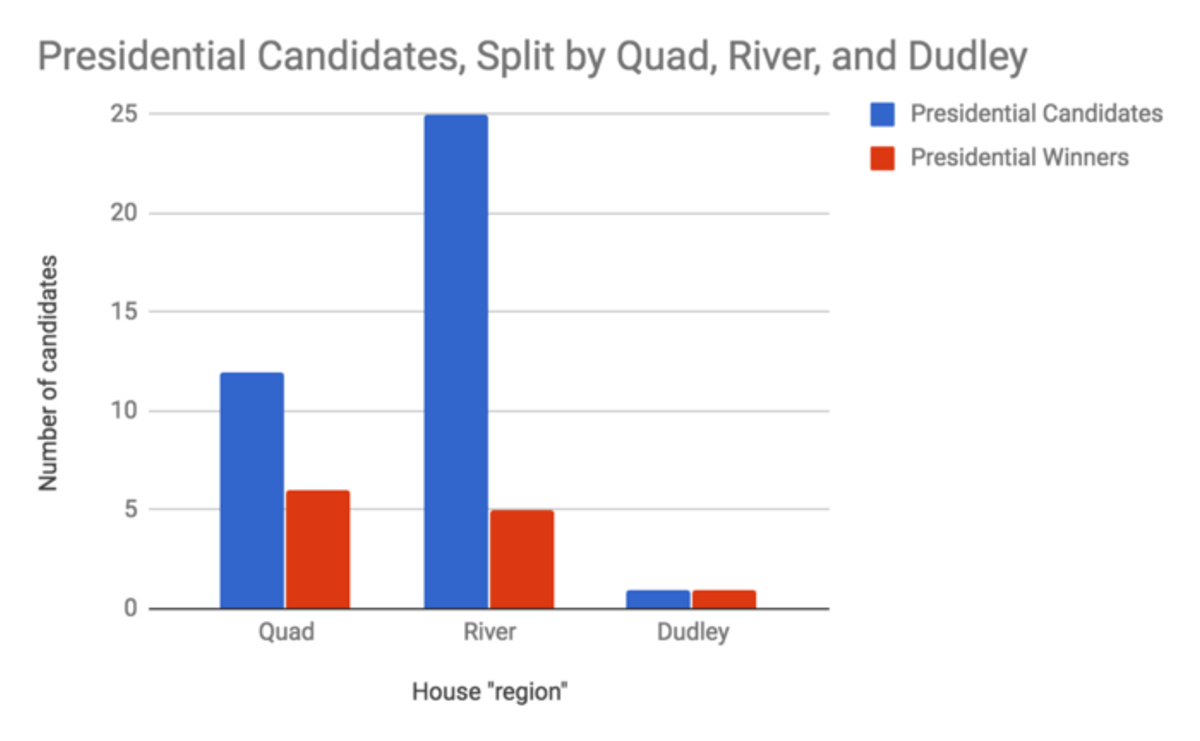 Despite the considerably greater student population and number of candidates on the river, the Quad has actually produced more UC presidents since 2005.

Since 2005, more UC Presidents have come from the Quad than from the River, even though three times as many students live on the River. Again, we have a very small sample here, so we shouldn’t draw too many definitive conclusions from this, but there could potentially be some “quad advantage” going on. On the other hand, we found that only one 1 of the last 12 vice presidential winners came from the Quad — all the rest came from the River!

Qualitatively, this advantage is also plausible. The Quad is well-known as a close-knit community on campus, so Quad residents might be more likely to know and vote for a UC presidential candidate from any of the 3 Quad houses. In addition, HODP has found that the Quad consistently has higher turnout in general UC representative elections. We don’t have data on presidential elections stratified by house, but assuming that these trends hold true, that higher turnout might also explain the “Quad advantage.”

As usual, our sample size is small, and it’s entirely possible that the trend we’ve seen is solely due to chance. Nonetheless, this is an interesting finding.

Advantage: Zhang-Boucher. If there is a “Quad advantage”, it would help the Zhang-Boucher ticket. Zhang hails from Cabot House, while Boucher lives in Mather. That’s the prized Quad-River combo discussed above! The other two tickets have all-River candidates.

All in all, our sample is quite small, and past results don’t guarantee future ones. Plus, unexpected things can always happen in elections — if you need a reminder, just remember Trump’s election a year ago!

But, with all the usual caveats, we can observe some general trends from past years that might be helpful in looking at the 2017 presidential election. If you’re champing at the bit to know how this year’s election might go, early speculation based on past results might suggest a slight advantage for Zhang-Boucher. That said, it’s still far too early to make any real predictions.

How will the election actually shape up? We’ll be back next week with our second annual polls and analyses to see if we can figure that out. Stay tuned!