Watching the Democratic debate this week? Here’s what Harvard students thought of the last one.

With the third Democratic debate around the corner, we figured it would be a good time to look back at Harvard students’ thoughts on the second debate that took place July 30–31. The Democratic primary offers us a unique opportunity to examine the fine-grained political differences and political perceptions of Harvard students, who tend to lean Democratic but are deeply divided on the primary field.

As a follow-up to our political survey previously analyzed here, in the week following the debate, we asked all students who responded to that first survey to fill out another about the second Democratic debate. In total, we sent the survey to the 149 respondents who had already told us their opinions on the Democratic primary, and received follow-up responses from 110. Among those respondents, 47% watched the full first night of the second debate, while only 45% of respondents watched the second, a slight decrease. This was in contrast to the general public in which there were more viewers on the second night than the first night. This was likely because many of the candidates who are disproportionately popular among Harvard students, like Elizabeth Warren and Pete Buttigieg, were in the first night of the debate. 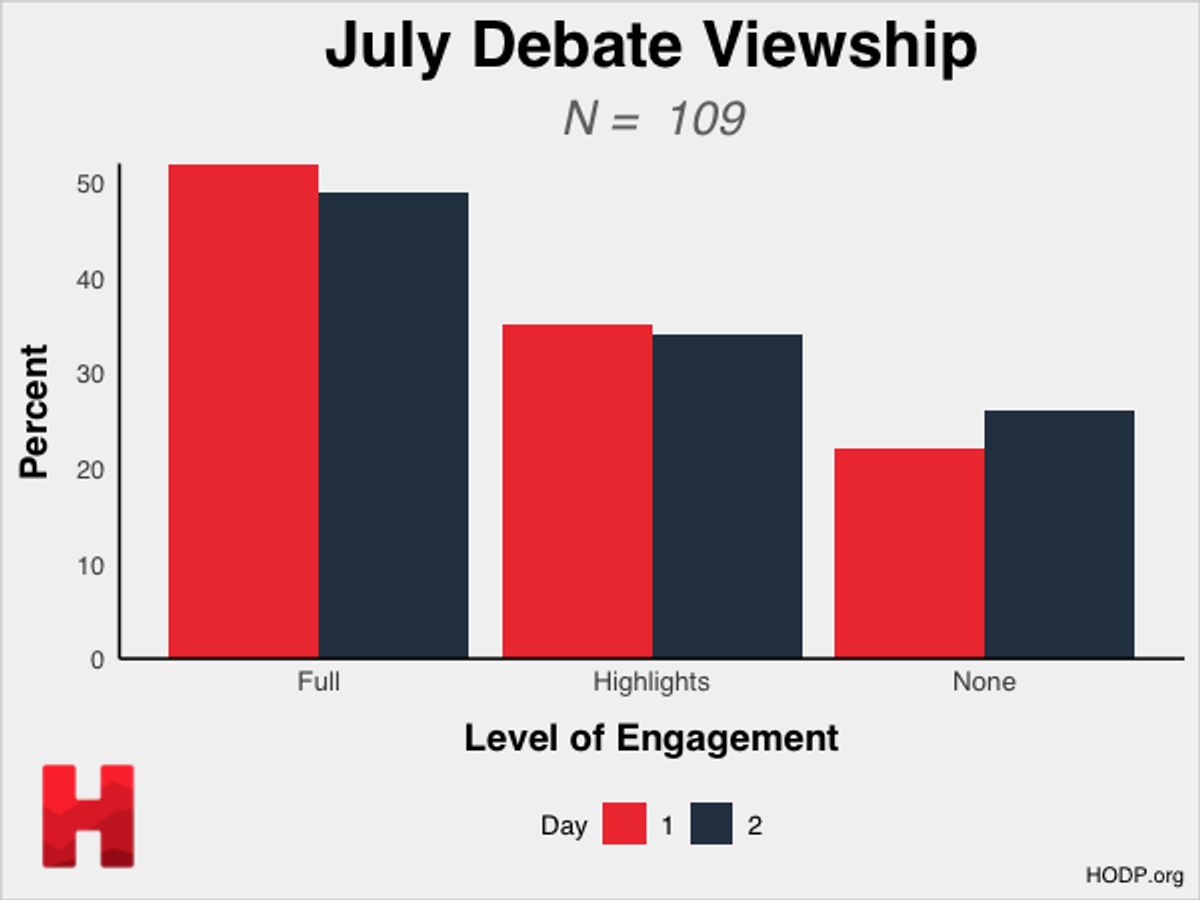 In the first night, a majority of respondents (57.3%) who watched the full debate or highlights of the debate believed that Warren won the debate. This is in line with Warren’s popularity among Harvard students. However, her dominance in the first night among Harvard students suggests that even students who did not have her as a first choice (34% in our pre-debate survey picked her as their first choice) believed she won the debate. 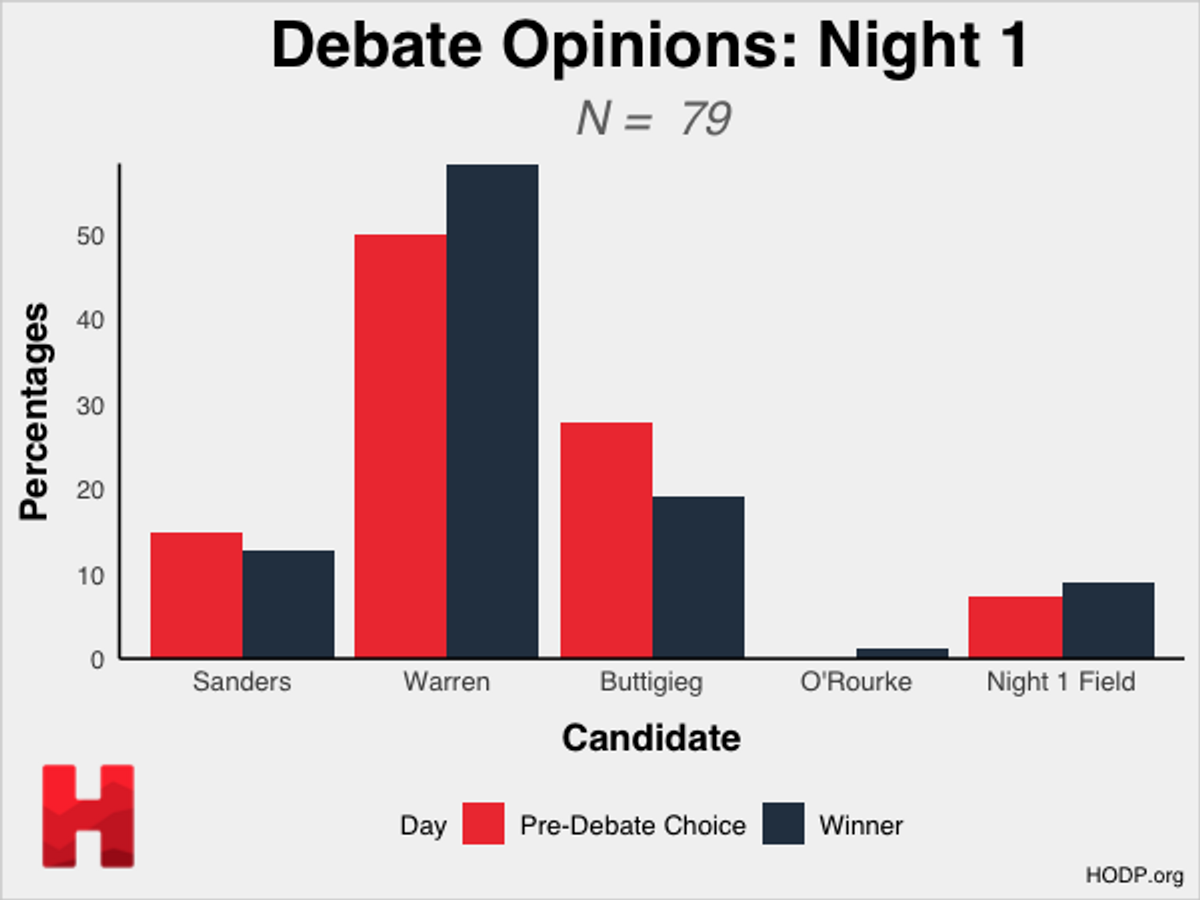 By contrast, in the second night, no candidate received a majority of support, but Cory Booker was the clear plurality with 33% of respondents indicating that he had the best performance, far surpassing his general popularity among students. 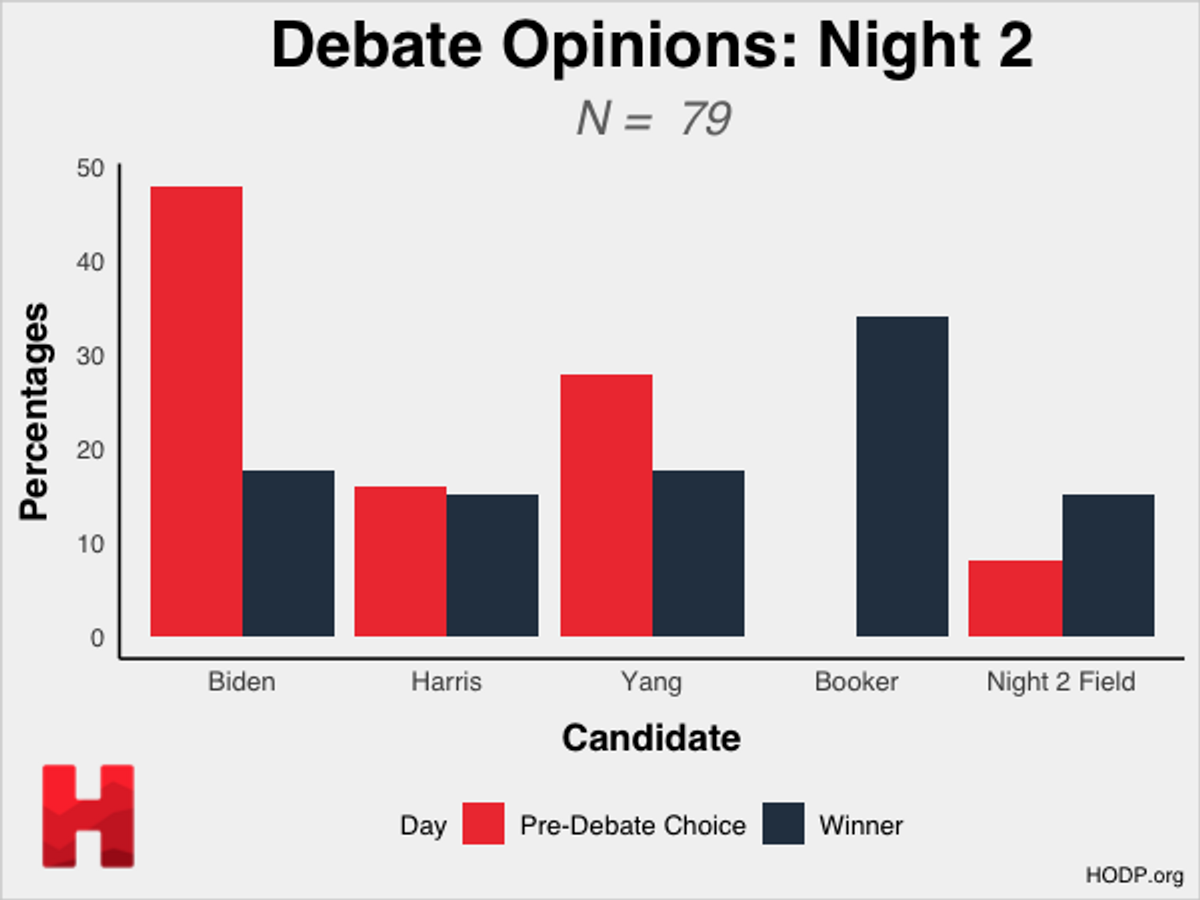 However, it does not appear that the debates played a major role in changing opinions of voters immediately after the debate. Despite Booker’s dominance in the second night of the debate, only one respondent listed him as their top choice afterwards. Most of the other candidates held steady in their first choice support. 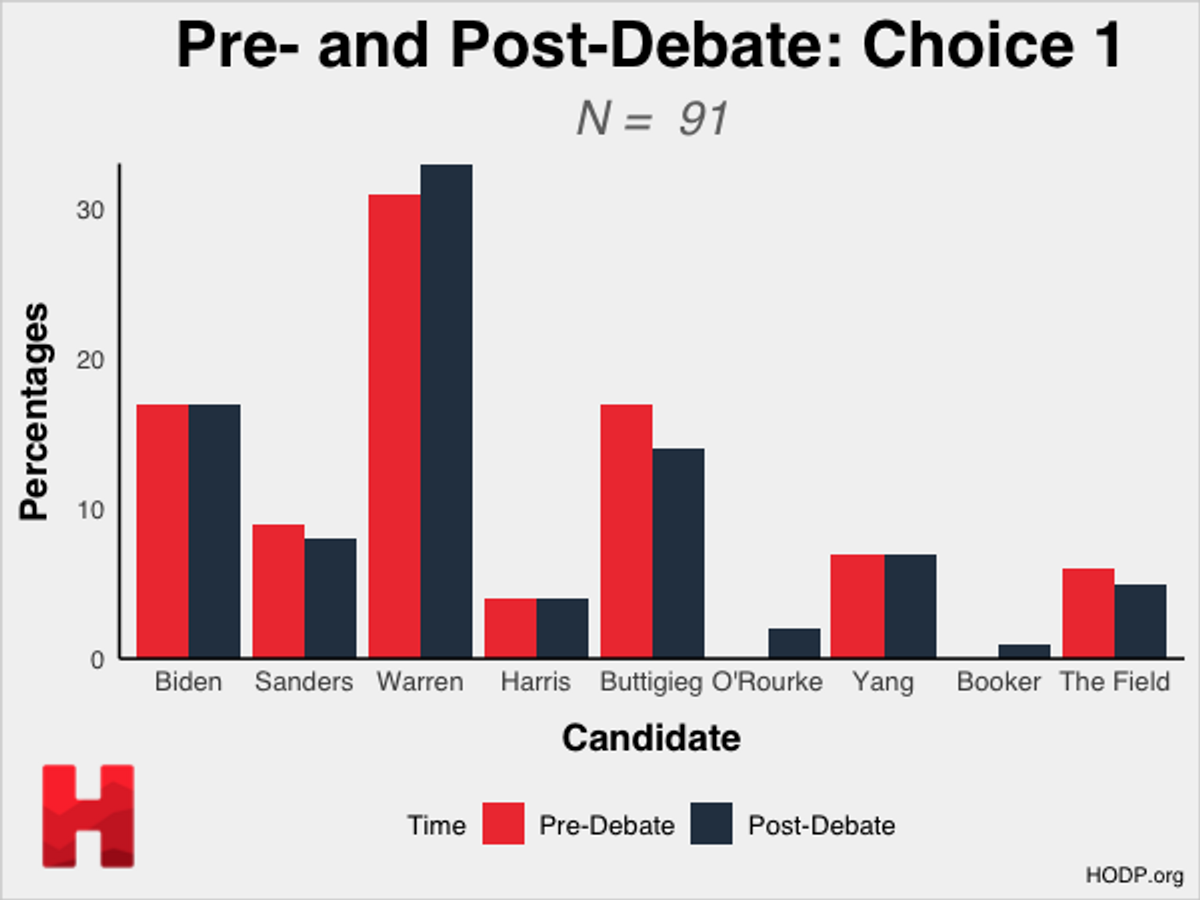 While Harvard, of course, represents a limited sample, and students may be more steadfast in support of particular candidates than the general population, this lack of change does cast doubt on the notion that less popular candidates will be able to substantially improve their position by performing well in the debates.

The story is a little bit different for second and third choice, where there were more shifts in support. Lower-tiered candidates gained especially large amounts of third-choice support after the debate. This could suggest that for some candidates, performing well in the debate and just staying in the race long enough for first or second choice candidates to drop out could be an effective strategy. 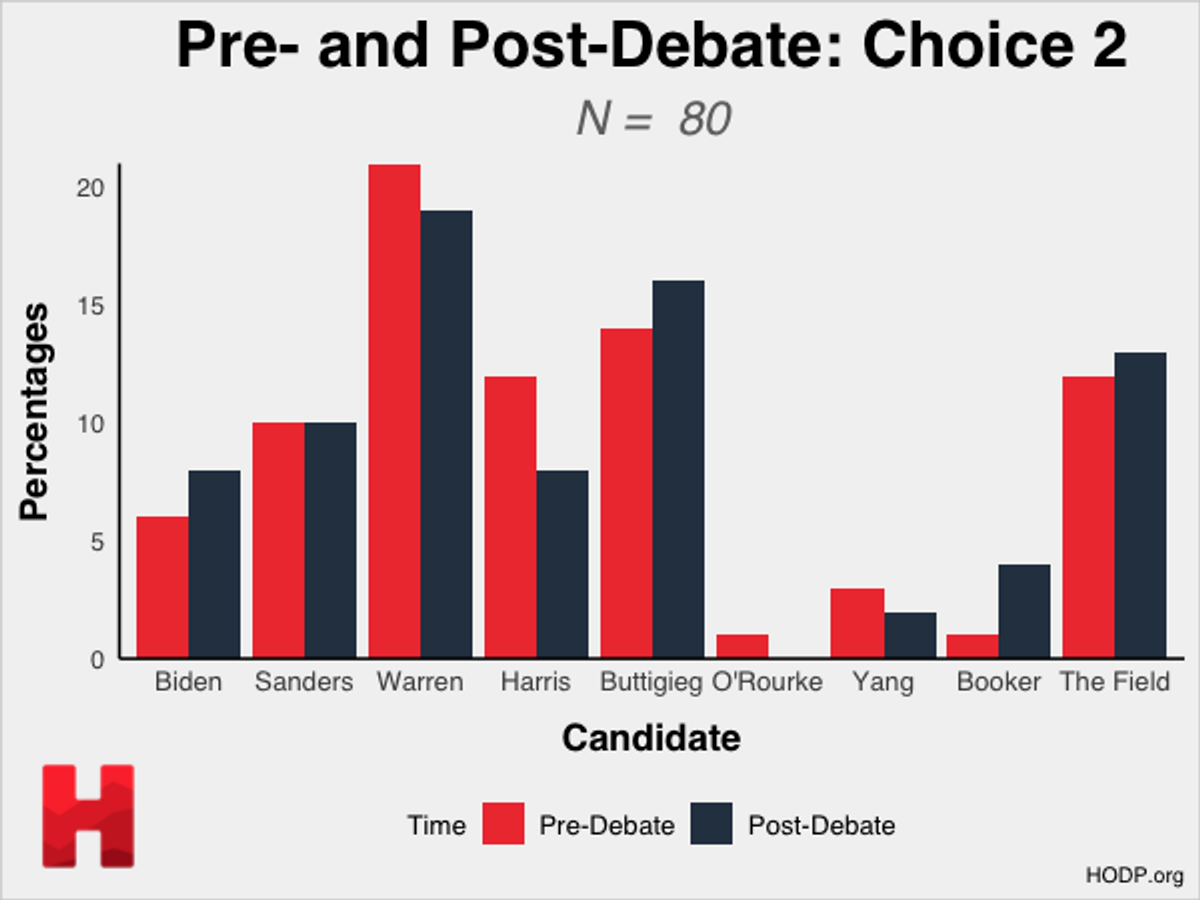 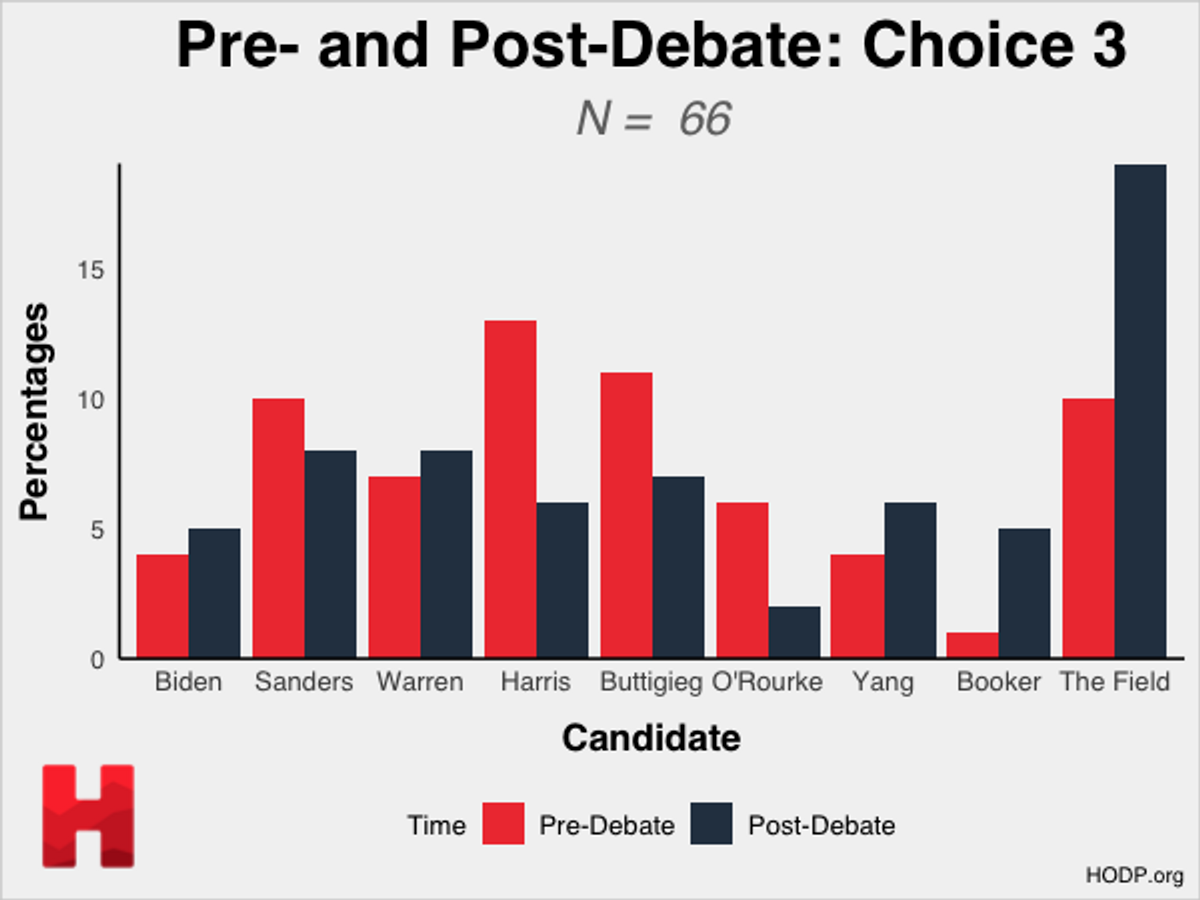 Kamala Harris notably lost about half of her third-choice support, perhaps because her performance in the second round of debates was not as striking as her clash with Biden in the first debate over bussing. Among those that did have changes in support at a specific ranking level, their changes in overall support seemed to balance each other out to a large degree. Yan, for example, lost some support as students’ second choice but gained third-choice votes. Interestingly, it was not the case that candidates whose support remained steady simply retained their existing supporters. Instead, the debates shuffled around support, with some candidates simply earning more support than they lost. 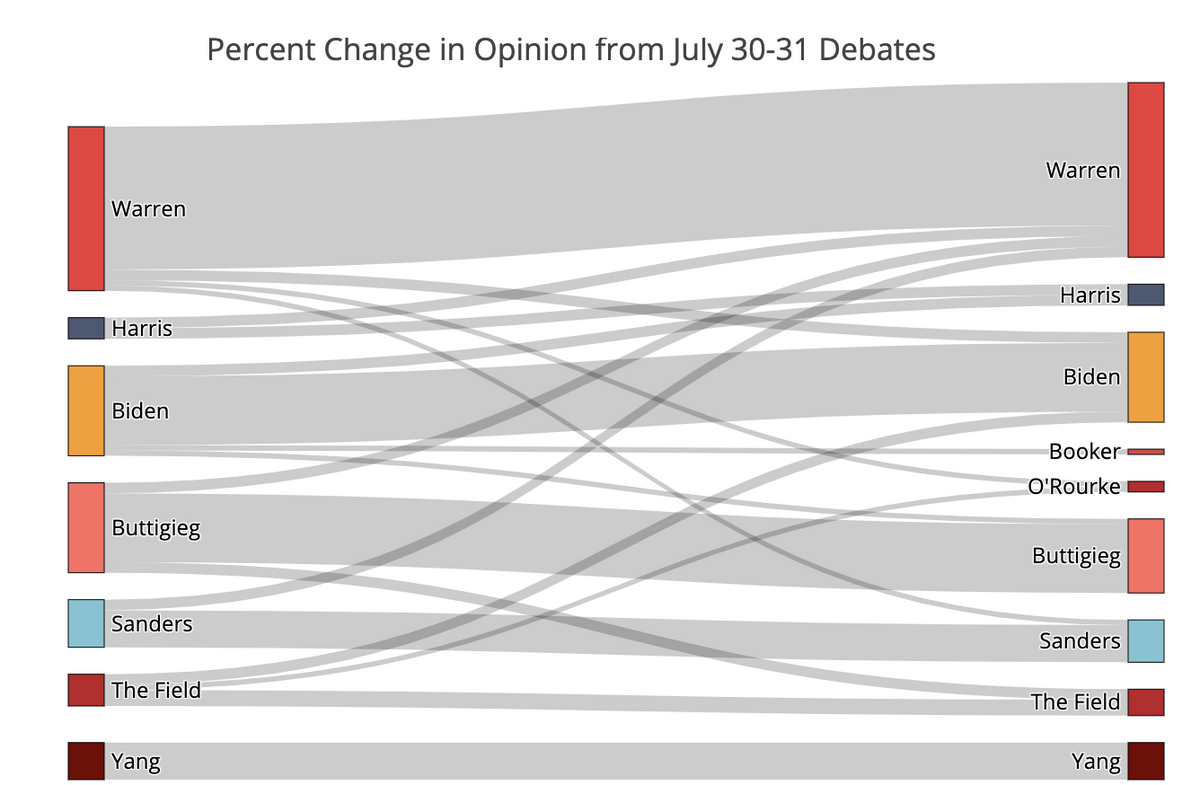 Perceptions of candidates’ electability, or ability to win in the general election against President Trump, remained roughly the same after the debates, with Joe Biden — who holds 18% of students’ first-choice support compared to Warren’s 34% — being considered the most electable by 48% of respondents. Warren’s electability rating increased from 20% to 24%, in line with a majority of viewers having considered her the winner of the first night, and Sanders’s electability dropped to about 8%. Electability rankings is where Harvard students’ opinions seem to best reflect other public polls, in which Biden is also considered the most electable Democratic candidate. 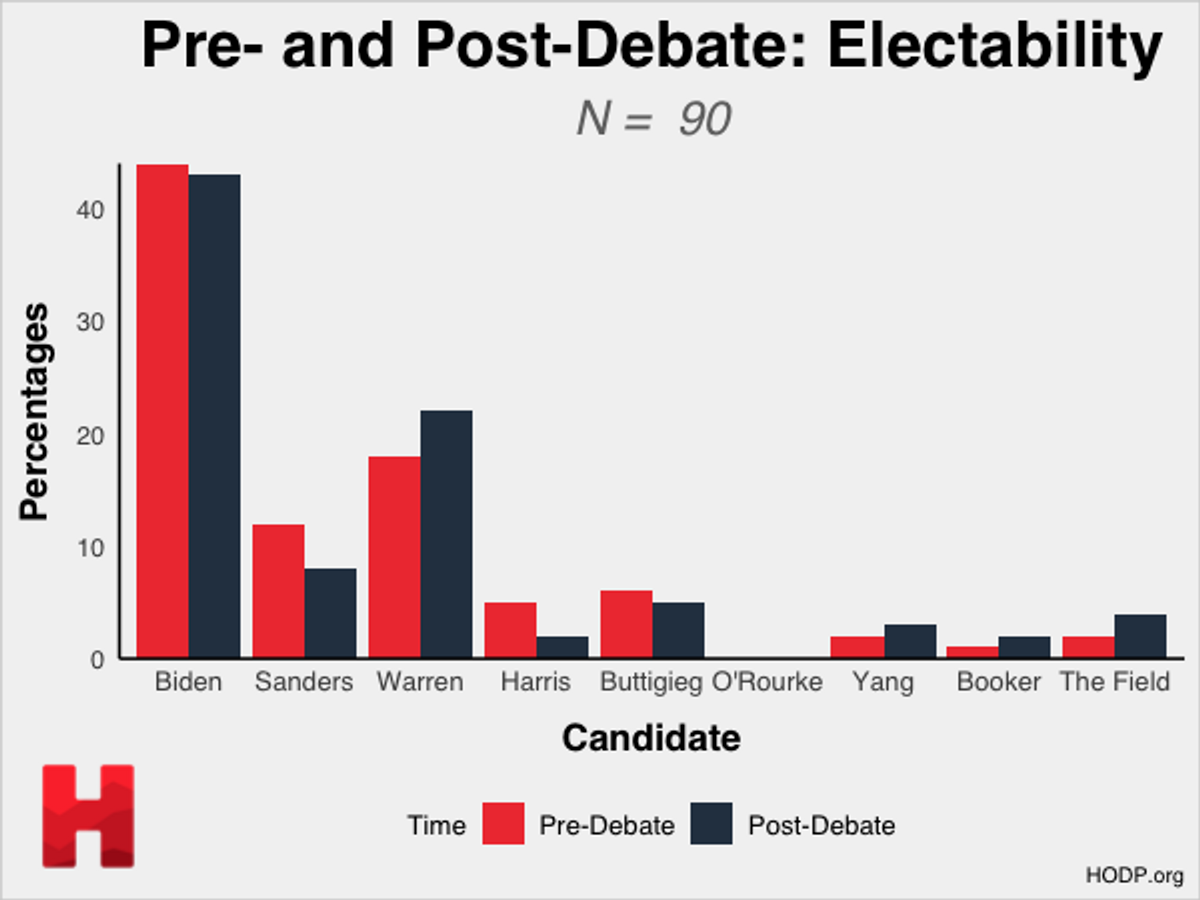 Warren and Booker were considered the winners of the first and second nights respectively, but no candidate gained nor lost significant support among students immediately after the second debate. About a third of respondents still consider Warren their first choice, and about half still consider Biden the most electable contender against Trump.

Of the twenty remaining Democratic primary candidates, ten who met a DNC funding and polling threshold will participate in the third, one-night debate on Thursday, September 12. It’s the first time the top five contenders in national polls — Biden, Buttigieg, Harris, Sanders, and Warren — will all debate together. Booker, Castro, Klobuchar, O’Rourke, and Yang will round out the stage.

How do Harvard students feel about the 2020 election?