Harvard in the Age of COVID-19

On March 10th, Harvard College students awoke to a new reality. President Lawrence Bacow announced in an email that students had to leave campus by the end of the week in light of the threat posed by COVID-19. What followed was perhaps the most unusual semester in Harvard history.

We at the Harvard Open Data Project wanted to investigate how students responded to the pandemic and the disrupted semester. We conducted three surveys over the course of the semester to capture both students’ immediate responses and their retrospective accounts: we sent out the first survey in March, right after students were starting online classes (437 responses). The second survey was conducted in April, as the University announced that all undergraduate courses would be graded with an Emergency SAT/UNSAT system (190 responses). And the final survey took place at the end of the semester, with students looking ahead to an uncertain future (179 responses).

In this article, we use our survey results to analyze how students reacted to leaving campus and taking classes at home, as well as what they think will happen looking forward. We hope this is able to better inform the Harvard community about how the pandemic has affected students, and to hopefully guide decisions moving forward.

With only five days’ notice, undergraduates had to quickly make plans to leave campus. Students had to figure out where they would live, how they would get there, and where they would store their items on campus. The College and the Undergraduate Council announced that they would provide stipends to assist with moving, but many students nonetheless had to pay out of pocket to cover the expenses. The median student spent $250 moving off campus. 19% of students reported no out of pocket expenses from the moveout, while 10% of students reported spending in excess of $1000. 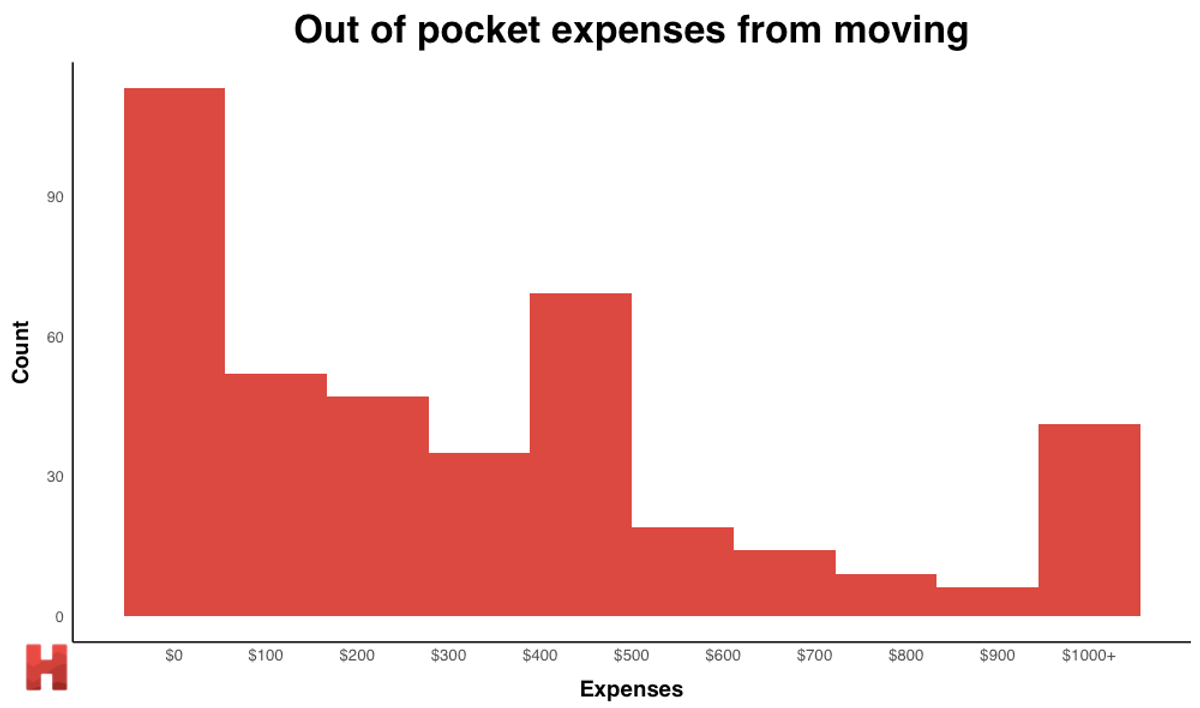 The vast majority (85%) of students returned to a family home, while only 3% of students reported staying on campus. The remaining students either stayed with a friend (6%), had their own apartment (3%), or had some other living arrangement (2%). Three quarters of students lived with a time-difference of less than 3 hours from East Coast time, with 61% of students living on the East Coast.

While it is not known how many students were infected with coronavirus, Harvard University Health Services did announce that Harvard affiliates had tested positive for COVID-19 prior to students leaving campus. It is unknown whether those infected were students.

However, nearly 30 percent of students reported experiencing some flu-like symptoms in the weeks after leaving campus.

While we do not know whether or not these were related to COVID-19, it is nonetheless indicative of the potential danger of sending possibly infected students off-campus and across the country. 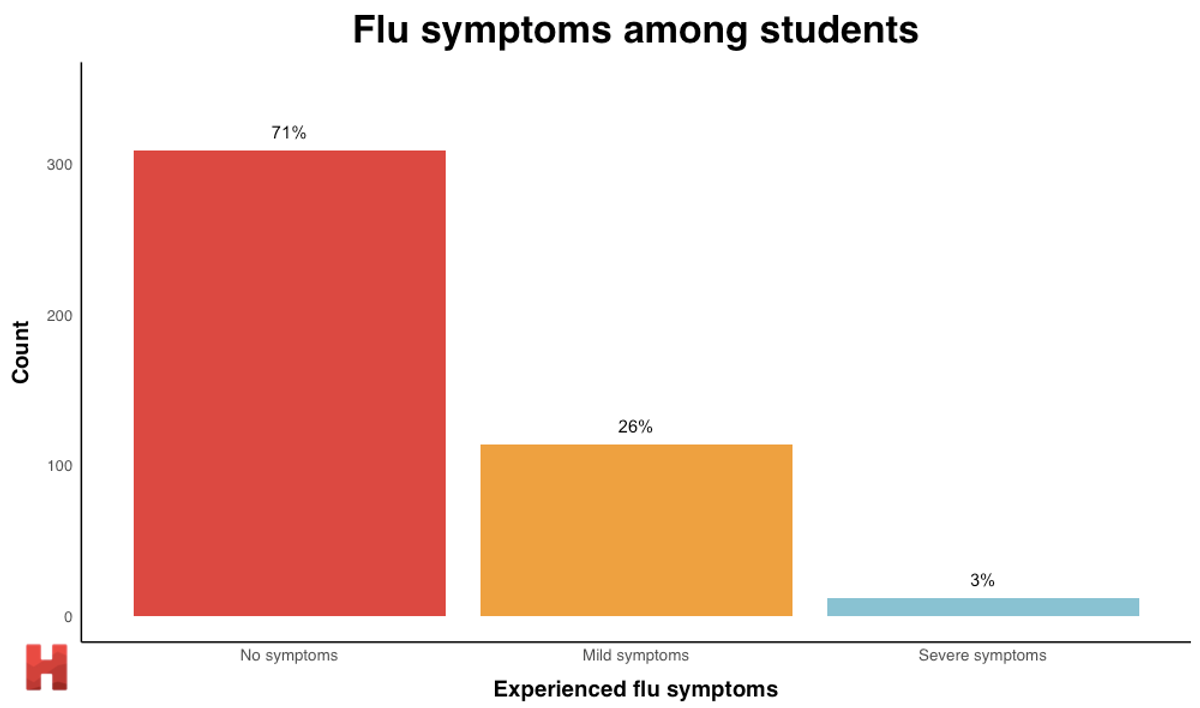 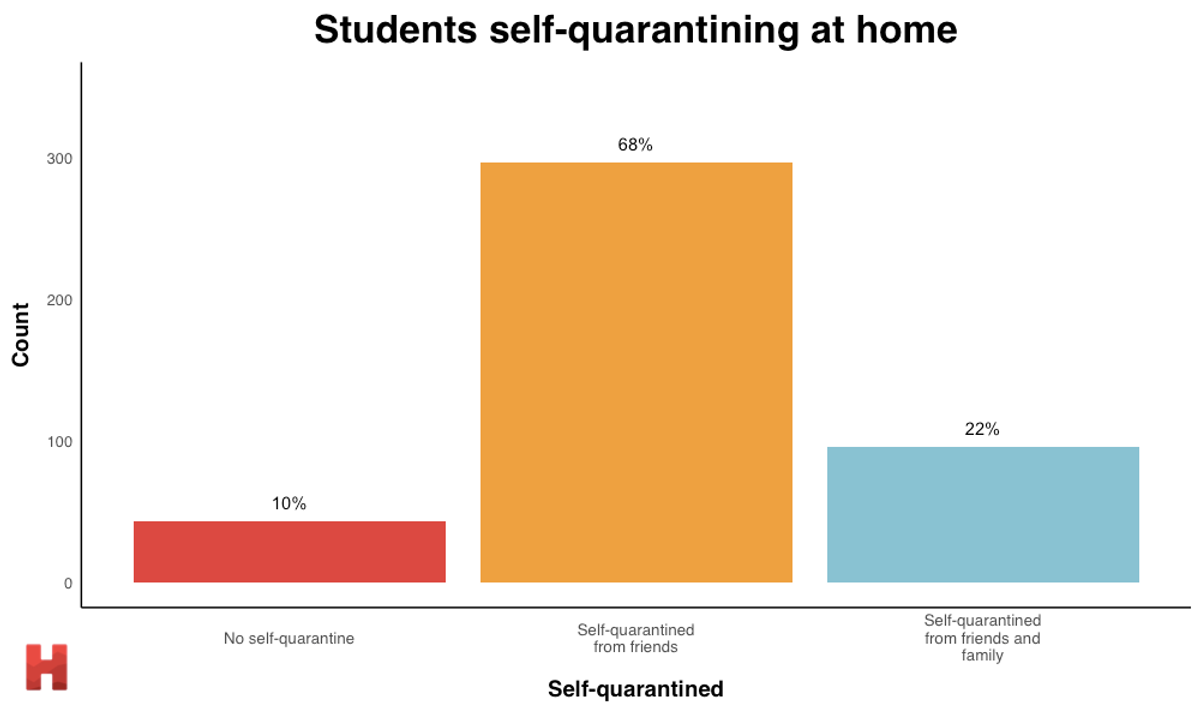 Whether students self-quarantined in the days after returning home

Students returned home under the shadow of the pandemic. Social distancing became the new norm as governments shut down public areas and strangers became potential sources of infection. 44 percent of respondents to our end-of-semester survey reported having had no in-person contact with people outside of their immediate household since leaving campus. 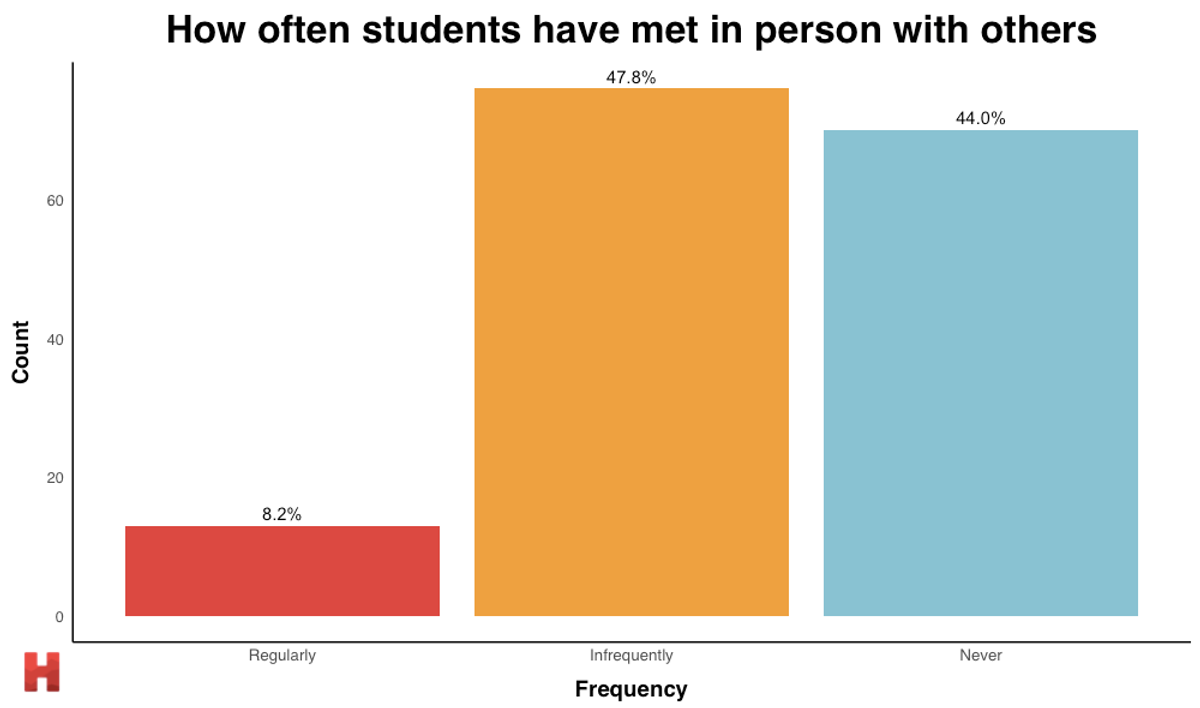 Despite the decline in face-to-face interactions, students found ways to keep in touch with friends from school. The vast majority of survey respondents reported contacting their friends from school at least once a week, with 57% indicating that they communicated with their friends every day. However, much of this contact occurred through text messages or group chats, which are an accessible mode of communication but may not replace the richness of in-person interactions. When asked how often they contacted their friends through a medium other than texting/messaging, most respondents indicated that these interactions took place less frequently (once every 2–3 days or once a week). 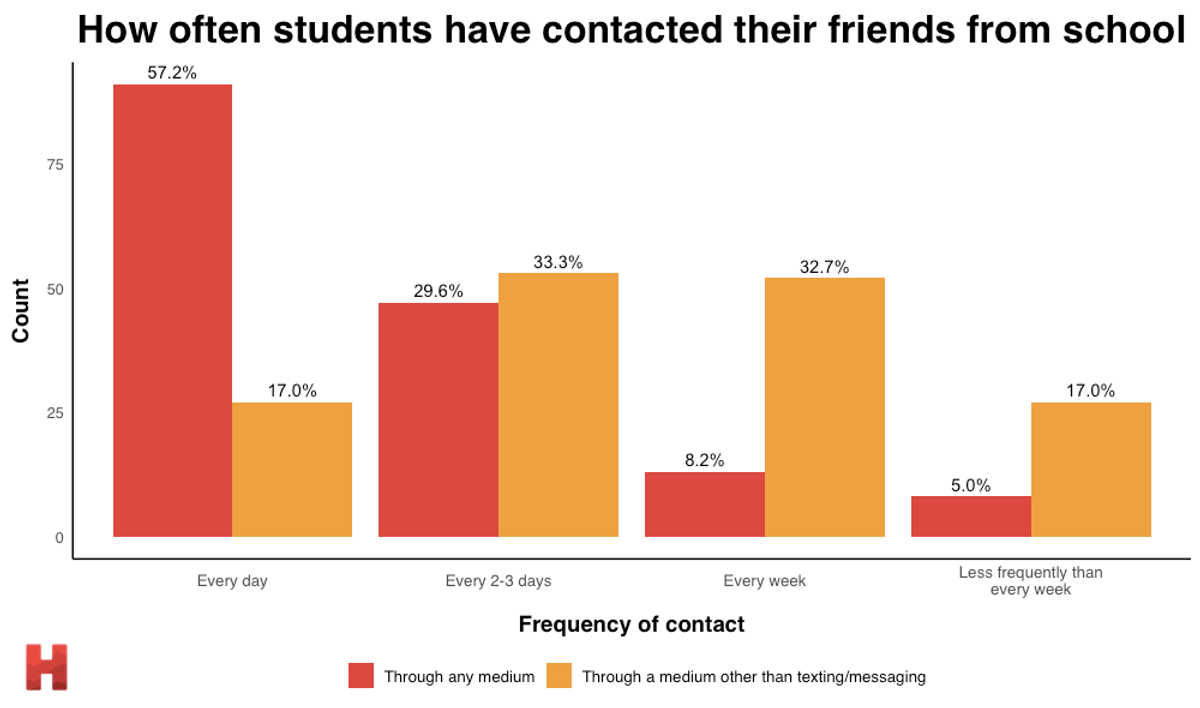 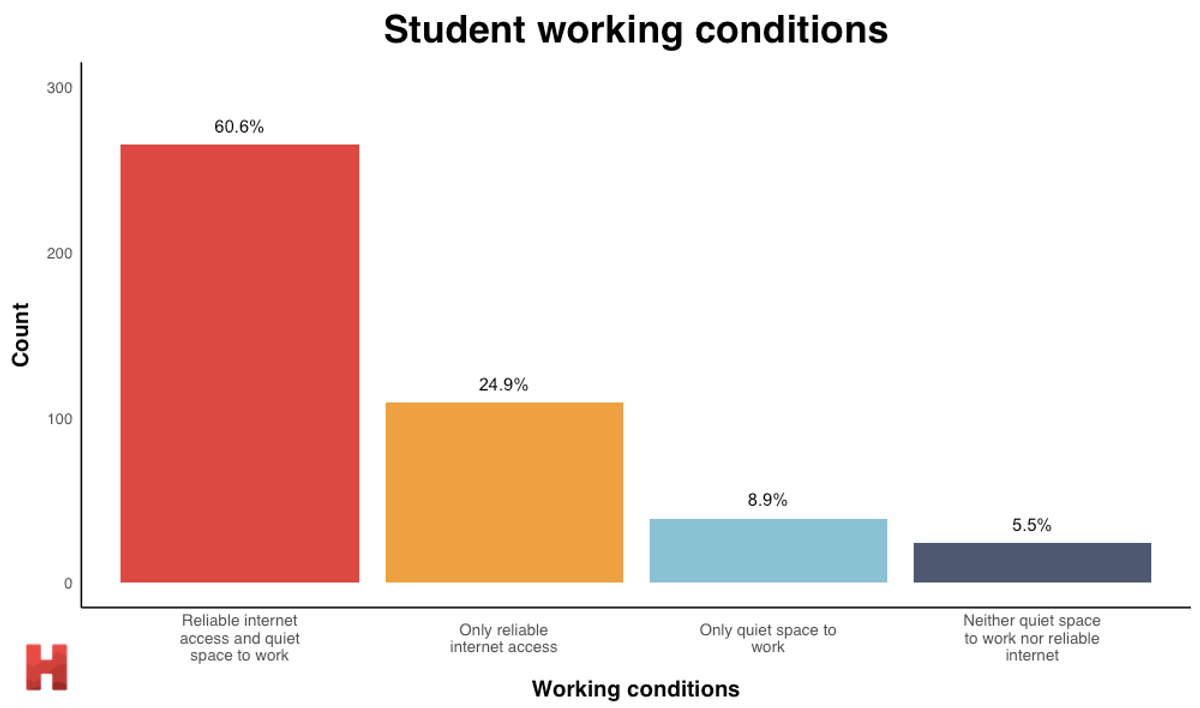 This inequality of working conditions also portended inequality in academics. Immediately after leaving campus, the College extended deadlines to switch classes to pass/fail and to drop classes. With students adjusting to online courses and facing the fear of infection, over 15% reported changing their course enrollment in some way. 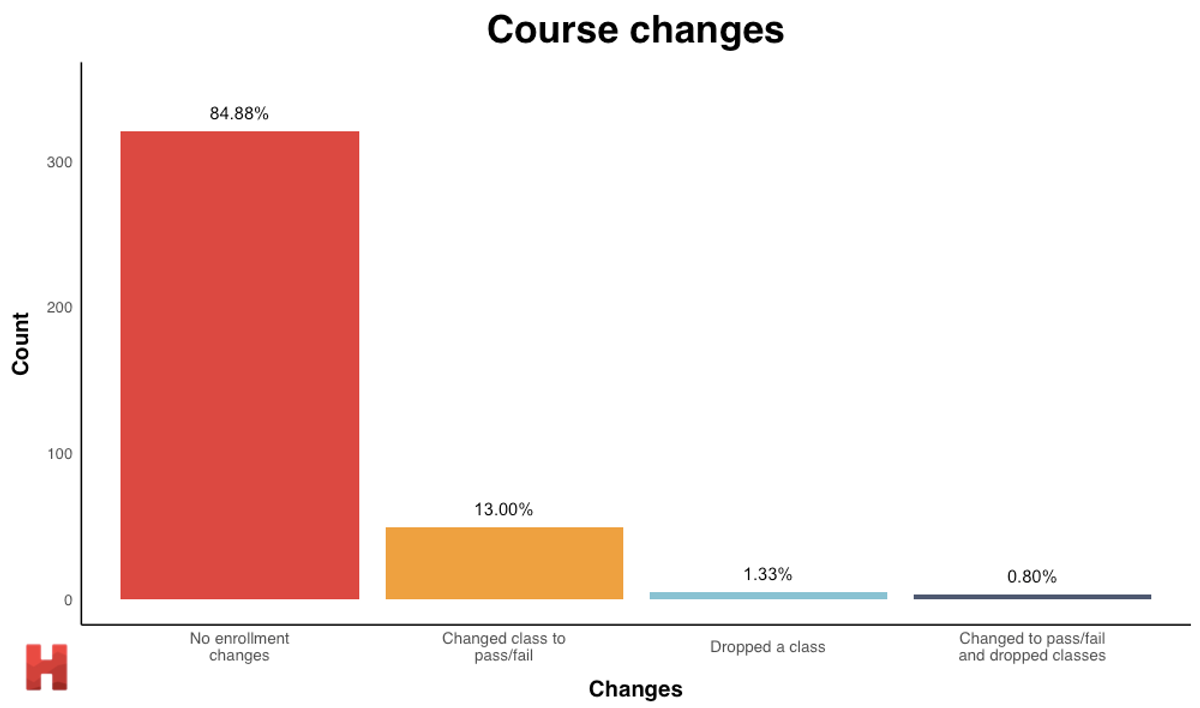 This clearly shows that some students found the prospect of online classes a serious challenge. However, there were concerns that even a voluntary system would be insufficient. Disadvantaged students may have been pressured to maintain their courses or avoid going pass-fail for fear of judgement by admissions committees for graduate schools.

With rumors swirling about a potential grading change, we asked students in late March what their preferred grading system would be. The most popular was a Universal A/A- system that also received support from the Undergraduate Council at the time. 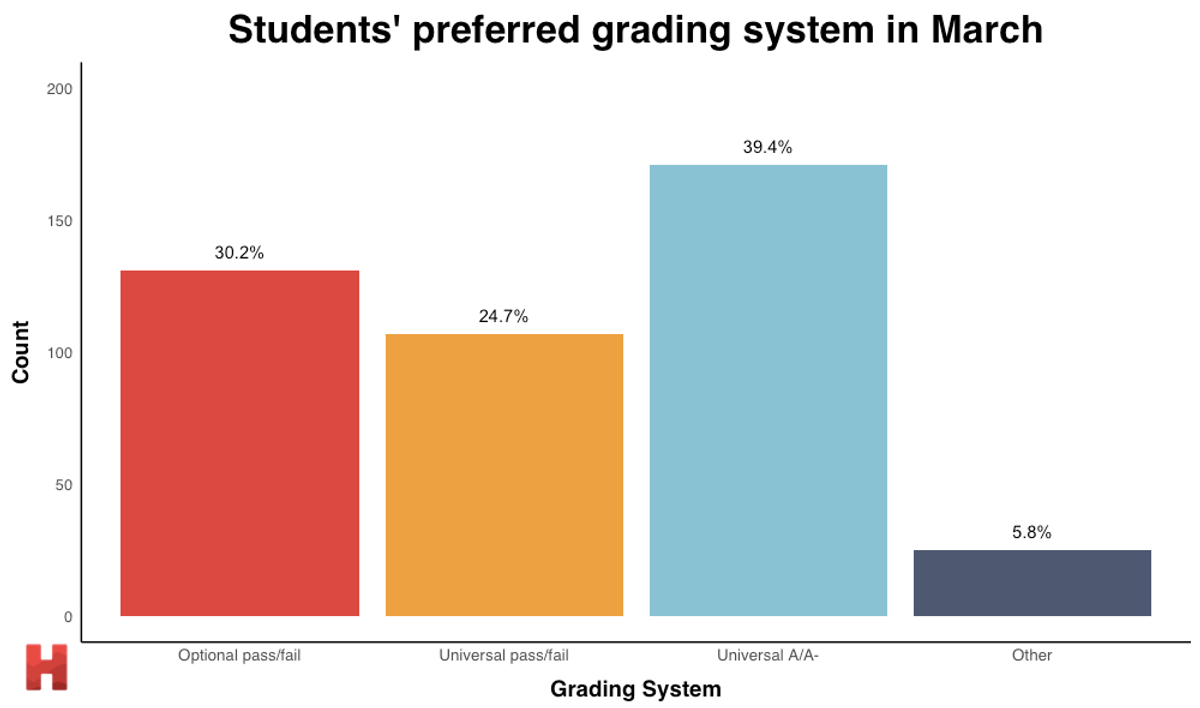 The University announced on March 27th that Harvard would adopt an Emergency Satisfactory/Unsatisfactory grading system to address potential inequities arising from distinct home environments. Notably, this was the least popular of our three listed grading choices in March. 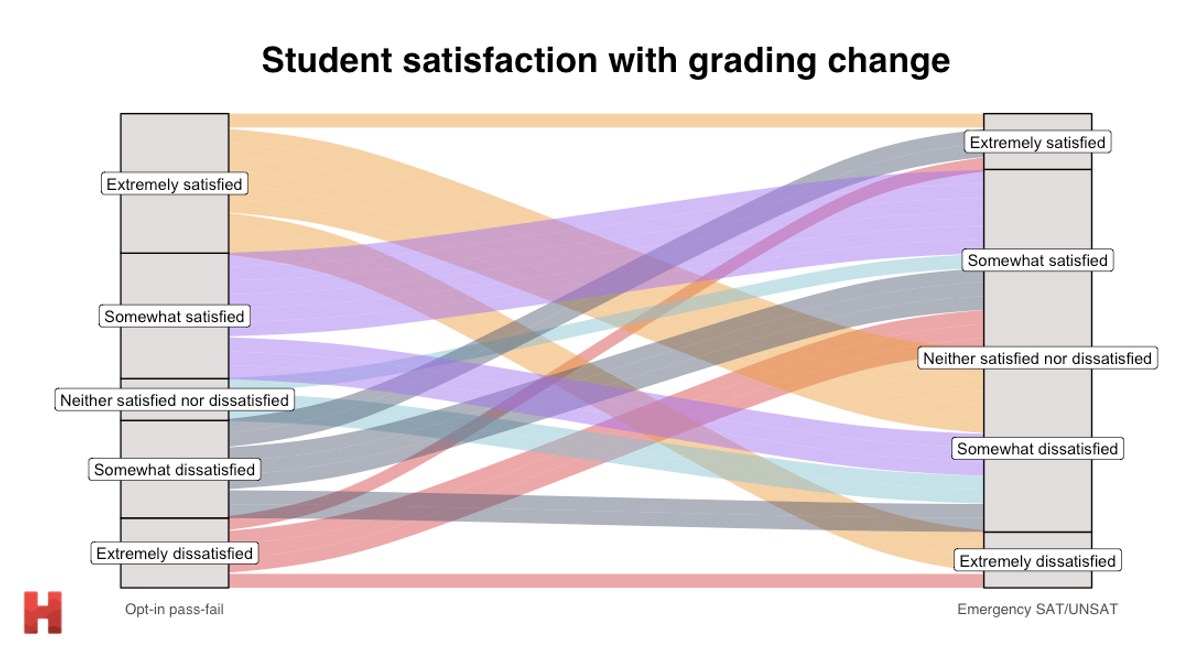 We were also curious about how well different departments transitioned to online teaching. We asked students to name their most effectively taught online course and their least effectively taught online course. Out of the most frequently mentioned departments, government classes had the highest ratio of positive to negative mentions and Expository Writing classes had the lowest ratio. The most controversial course in our survey was COMPSCI 51: Abstraction and Design in Computation, which five respondents rated as their most effective course and four respondents rated least effective. Reviews of computer science, economics, and general education courses were mixed, but math earned a largely positive rating, bolstered by MATH 21B: Linear Algebra and Differential Equations. 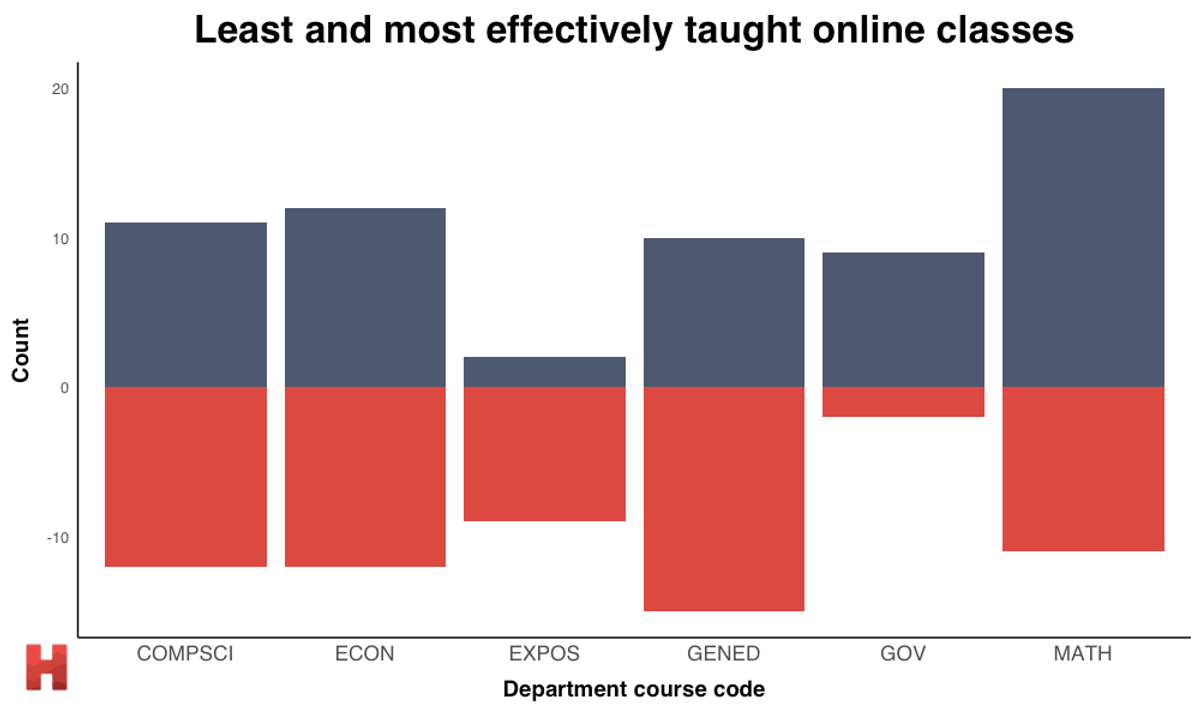 While Harvard’s response may have seemed sudden at the time, similar actions were soon taken by universities across the country. We were curious how students judged Harvard’s policies. In both the March and end-of-semester surveys, we asked students to rate Harvard’s response to the pandemic on a 1 to 10 scale. Despite the rushed move out and transition to online classes, students gave Harvard a median rating of 6 in March and a median rating of 7 at the end of the semester. 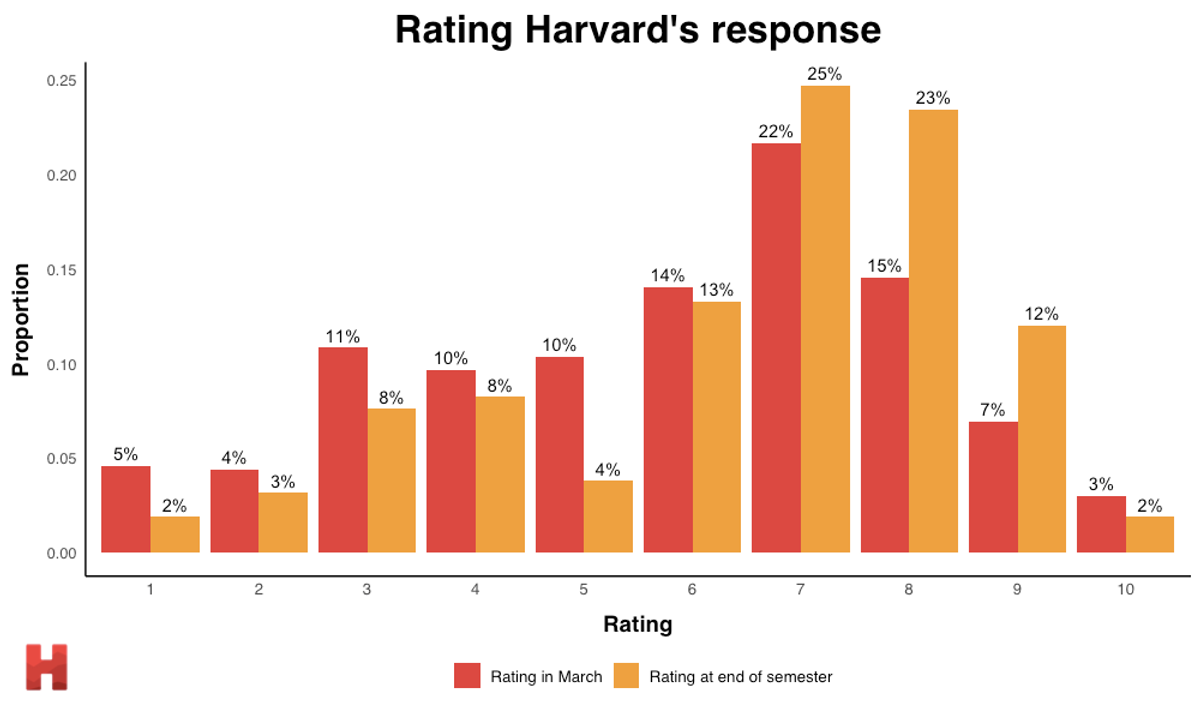 By comparison, students were much less happy with the government’s response to the pandemic in our March survey, which received a median rating of 3. 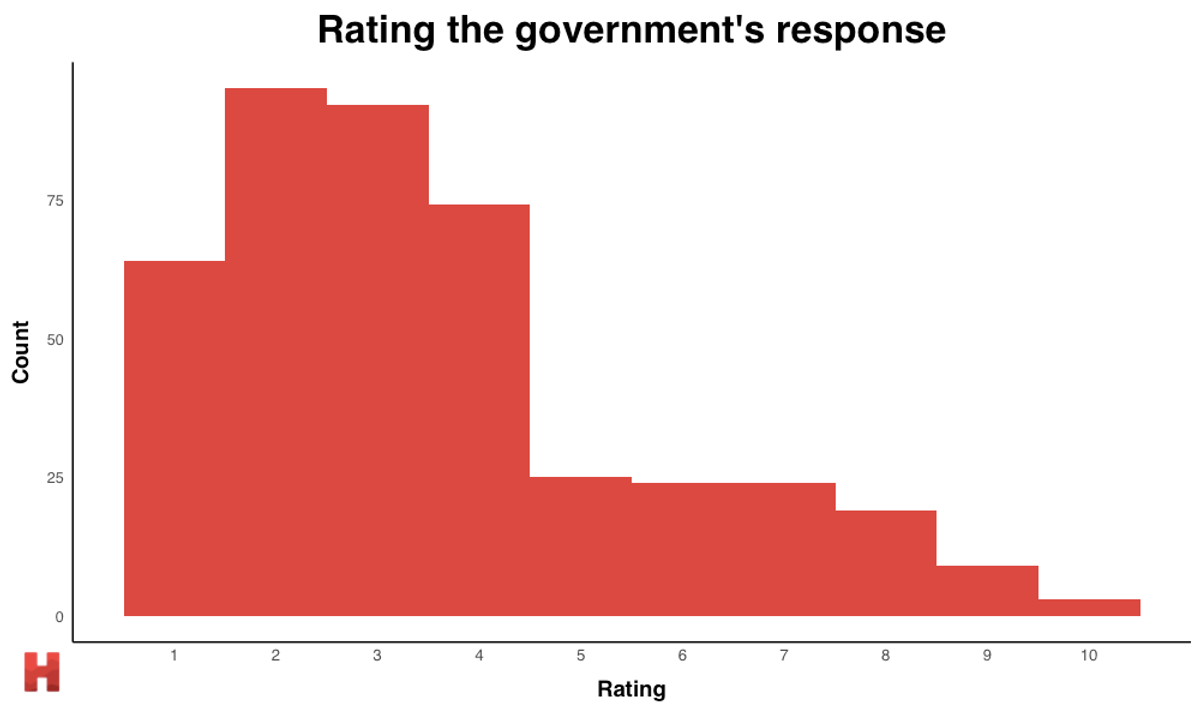 In addition to disrupting coursework and public health, the pandemic has also had a marked effect on students’ summer and post-grad plans. Many students’ plans became remote or were cancelled outright, and companies implemented hiring freezes that affected students who were recruiting during the outbreak. As seen in the plot below, many students who were planning on working in industry or completing an internship before the outbreak were forced to find other types of work. Students who had planned to do research or enter academia appeared to be less affected, while all respondents who had originally intended to study abroad or travel were forced to change their plans. 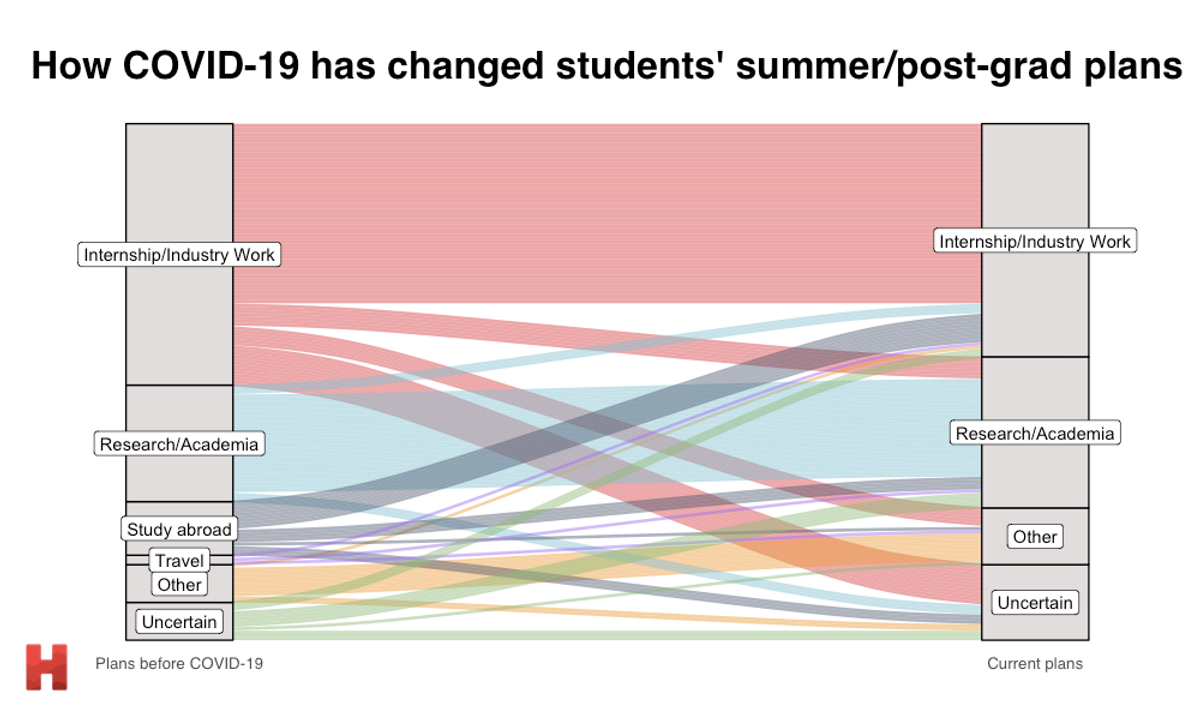 To more precisely capture the effect of the outbreak on students’ summer and post-graduate plans, we asked students to report all the ways in which their plans were impacted. 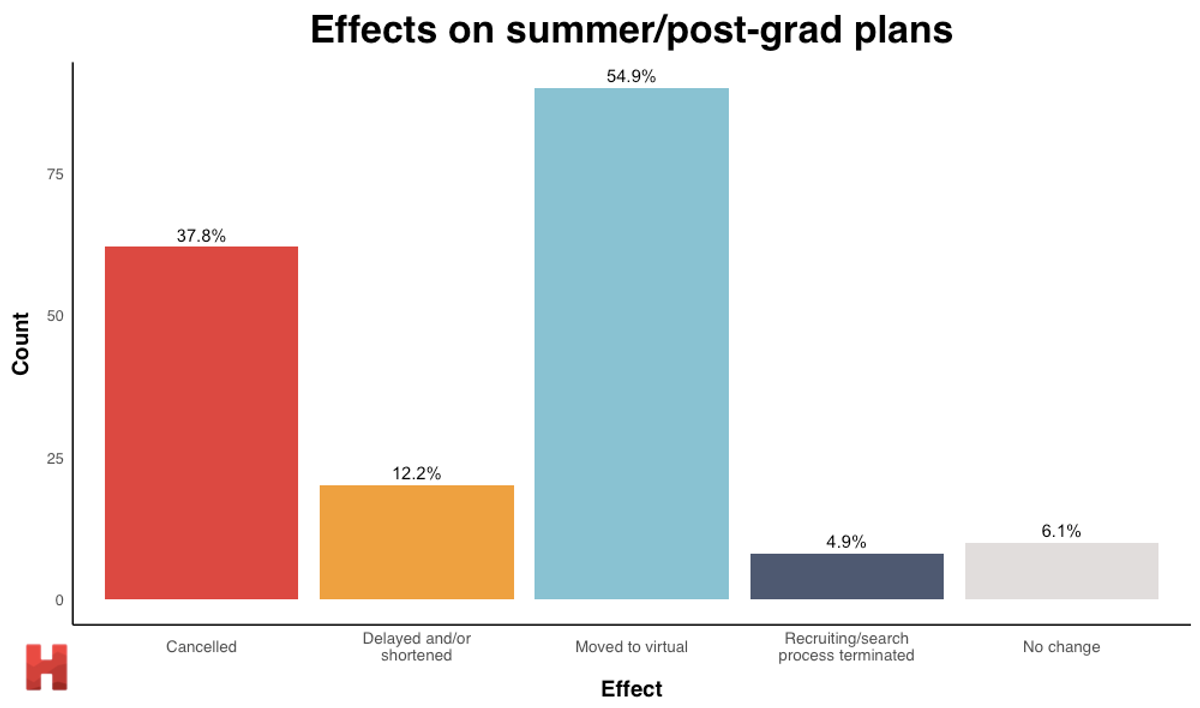 Note: the percentages in this plot do not add up to 100 because some students’ plans were affected in multiple ways.

One area of particular interest to students is how the Fall 2020 semester will be handled. Given that the pandemic is unlikely to subside before September, it appears improbable that the fall semester will proceed as normal, and Harvard is expected to announce its plans for the semester in the next week. Many respondents to our June survey were pessimistic about their chances of returning to campus in the fall, with a plurality (31.7%) indicating that they thought this scenario was somewhat unlikely. 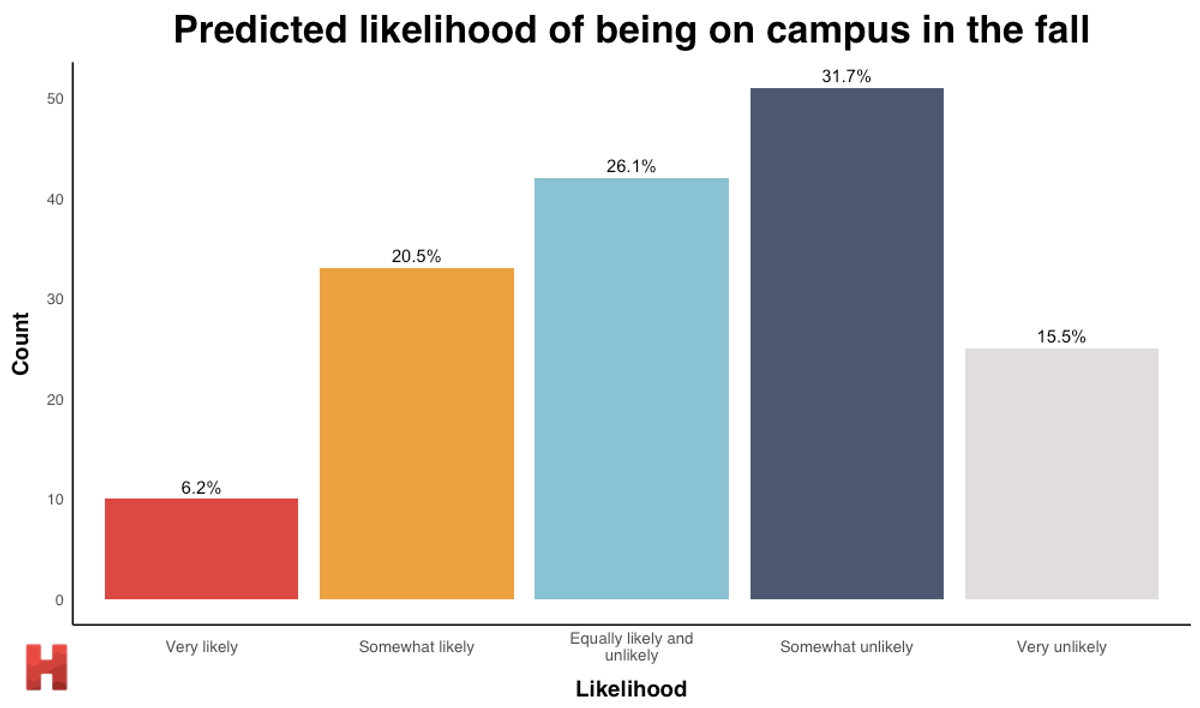 In contrast to the perceived unlikelihood of being brought back to campus in the fall, many students appeared to be willing to return if allowed to decide for themselves. The majority of respondents (66%) stated that they were either very comfortable or somewhat comfortable with the idea of returning to campus, with only 23% of students reporting that they were somewhat or very uncomfortable. 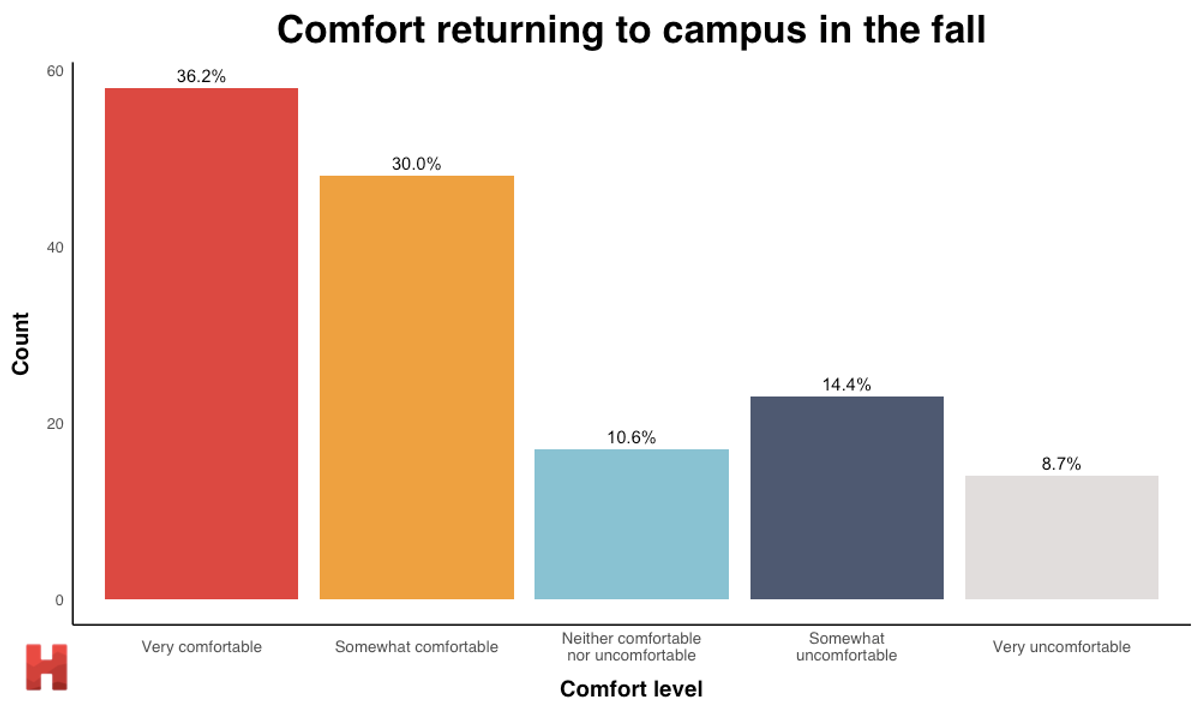 Consistent with their high levels of comfort with returning to campus, most respondents expressed that their preferred policy for the fall was for students to be fully on-campus. The next most popular option out of those listed in our survey was to cancel/delay the fall semester to the spring, although this option does not appear to be on the table for the administration. Less popular were the options of only allowing some students on campus, conducting a fully virtual semester, and starting virtual but migrating to campus during the semester.

In contrast, when asked which policies they would implement for the fall if they were administrators at Harvard, far fewer students (26%) said that they would bring the whole student body back to campus. However, this option was still one of the most frequently chosen, along with allowing only some students on campus and starting virtual but going back to campus midway through the fall. The differences between respondents’ answers to this question and the previous question indicate that while students largely prefer to be on campus as usual, they understand that allowing all students to return may not be the wisest decision for the administration. 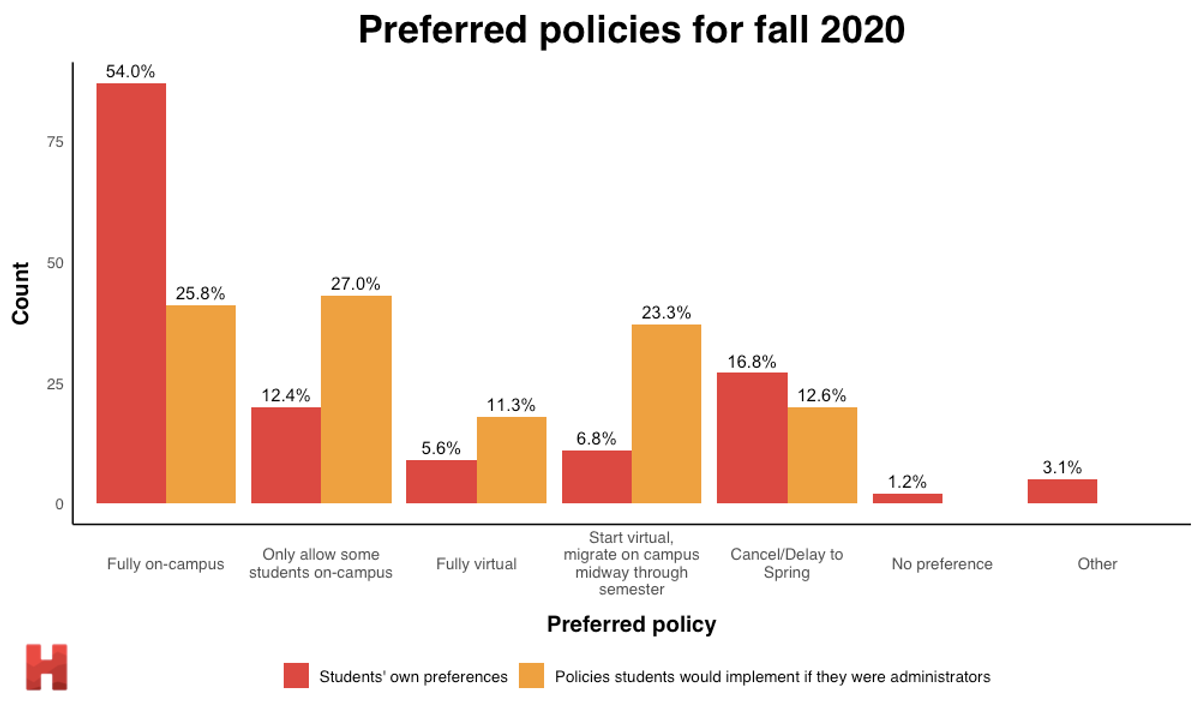 If students are not allowed back on campus in the fall, many are considering taking the semester off. However, because Harvard is unlikely to be able to accommodate large portions of its student body taking leaves of absence and returning at the same time, it is unclear what the potential consequences would be for taking time off. Students may be forced to extend their leaves of absence so that their returns to campus are staggered, or on-campus housing may not be guaranteed upon their return. In addition, an important consideration for many students is whether their friends would join them in taking a gap semester.

Far fewer students indicated that they would take a gap semester if the consequences were more severe, or if most of their friends elected to remain enrolled for the fall. 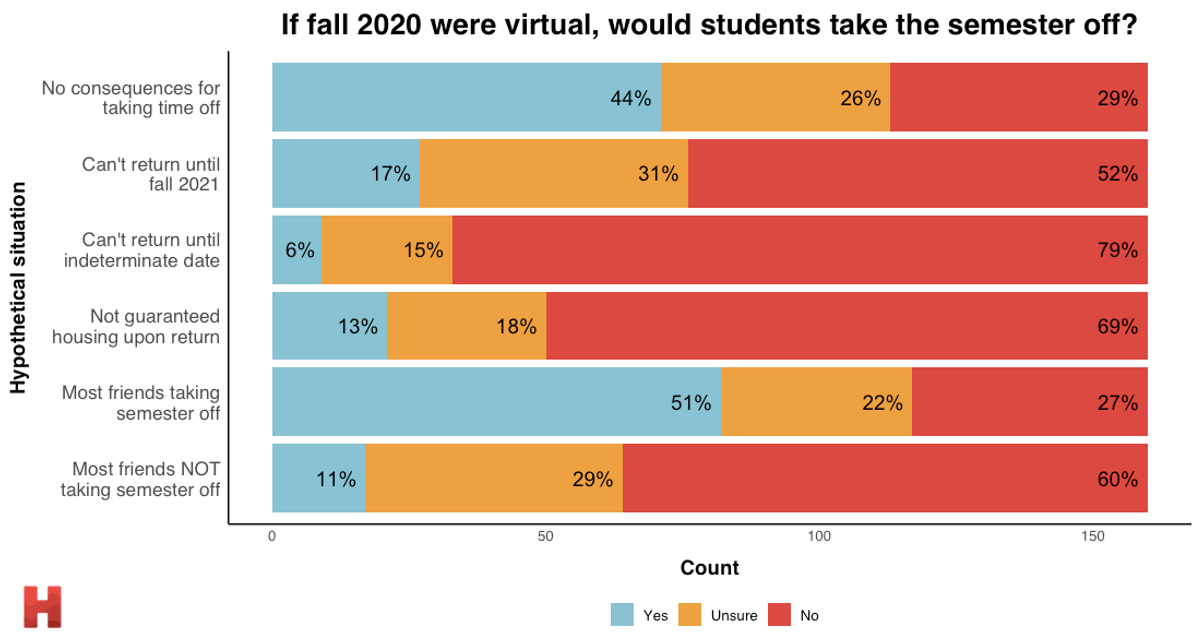 Beyond the Fall semester, the COVID-19 pandemic may also redefine “normal” life for some time to come. Given the pandemic’s far-reaching effects, we wanted to see how long students estimated it would be before the world was able to return to normal. Because students were isolated from each other when making these predictions, this may represent a set of independent estimates that could be used to harness the wisdom of the crowds. 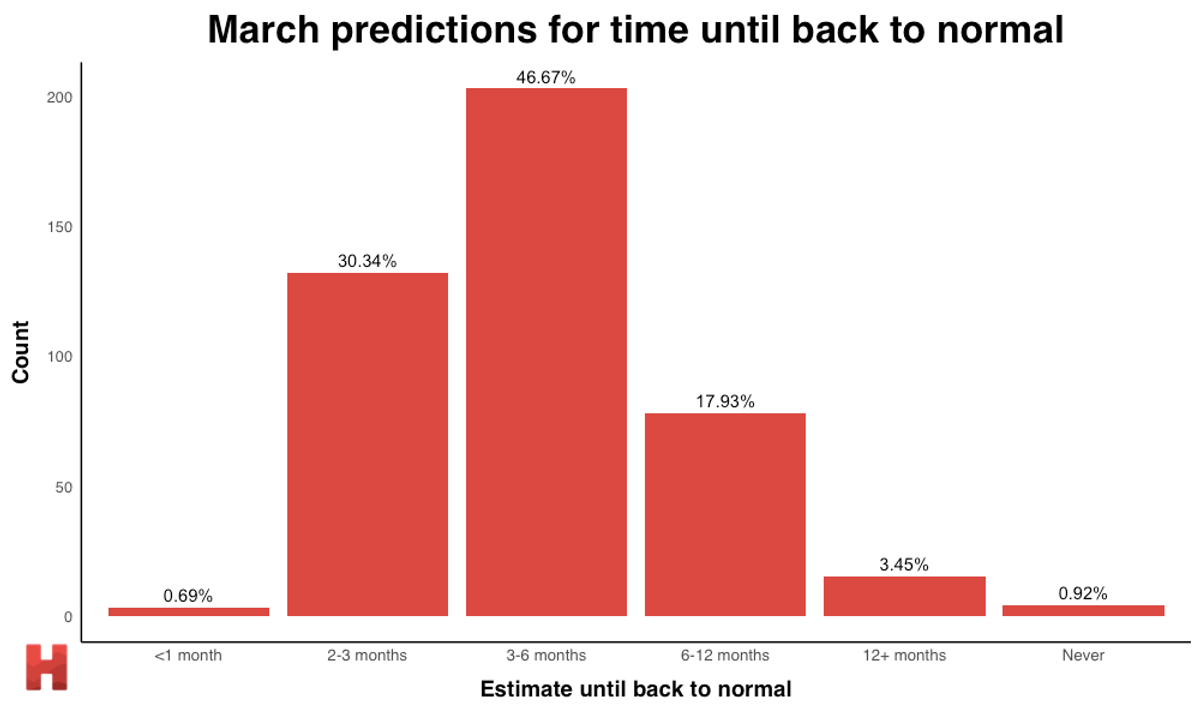 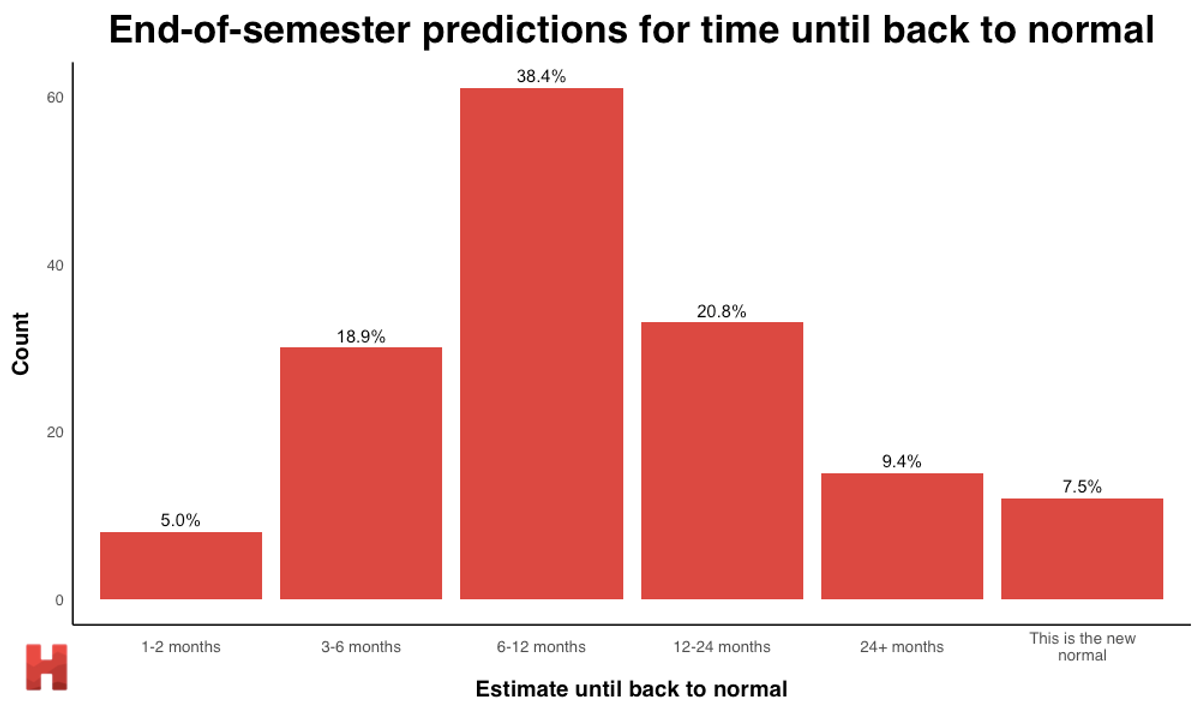 In both our March and end-of-semester surveys, we asked students to predict how long it would be before things returned to normal. In March, a plurality of students (46.7%) predicted that things would return to normal within 3–6 months, while at the end of the spring semester, the plurality (38.4%) was more pessimistic in its prediction that it would take another 6–12 months to return to normal.

It has been around three months since the March survey was conducted and more than a month since the spring semester ended, and states have begun to reopen to a limited extent. However, most aspects of American life are far from normal, and cases are again surging in many states. The future course of the pandemic as well as the academic future of students are far from certain.

What is certain is that students are now facing a changed world, not just for the Spring 2020 semester, but for the foreseeable future. Nonetheless, we are learning to adapt. While a digital experience may never replace an in-person one, we are discovering new ways to learn and to connect, no matter what happens in the fall. 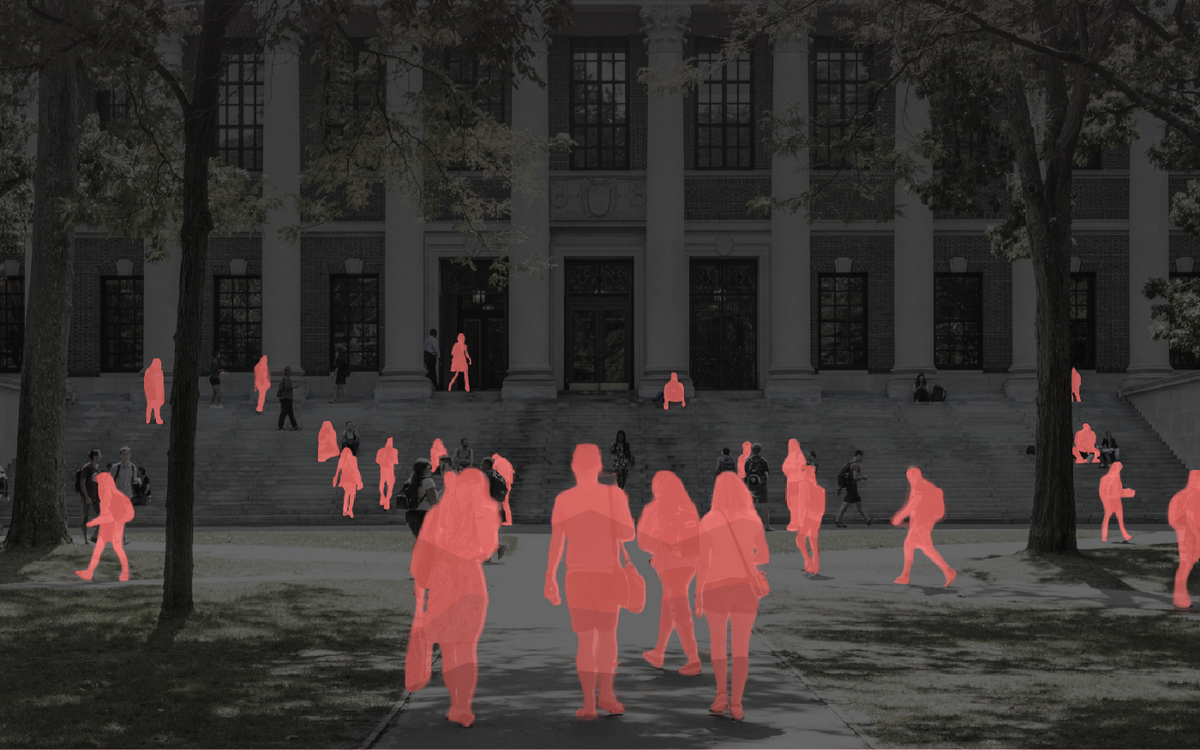 What will Harvard students do this Fall?
COVID-19 Dashboard