Using data to unearth the pervasive gender imbalance within Harvard’s Faculty of Arts and Sciences.

We know there are gender inequities everywhere — we’re constantly hearing about the underrepresentation of women in STEM and the poor treatment of women in the tech industry and on Wall Street. Recently, The Crimson highlighted the struggle of being a woman in the Harvard math department, which has no senior female faculty. At the Harvard Open Data Project, we decided to dig deeper into this data to see how Harvard is really doing with gender balance.

We counted the faculty listed on each department’s website and identified their genders based on pronouns used in their biography. When we use the word “female” or “women” in this article, we refer to people who take the “she/her/hers” preferred gender pronouns. If pronouns weren’t present, we found the most recent articles online about the professors and looked for their pronouns there.

Let’s dig into our findings.

We found that Harvard faculty are overwhelmingly male, even in disciplines one might not “expect.” The departments with the smallest proportion of female faculty are environmental science and engineering (6%), biomedical engineering (10%), and economics (15%), in that order.

Curious to know how your favorite departments stacked up? Check out our graph below. 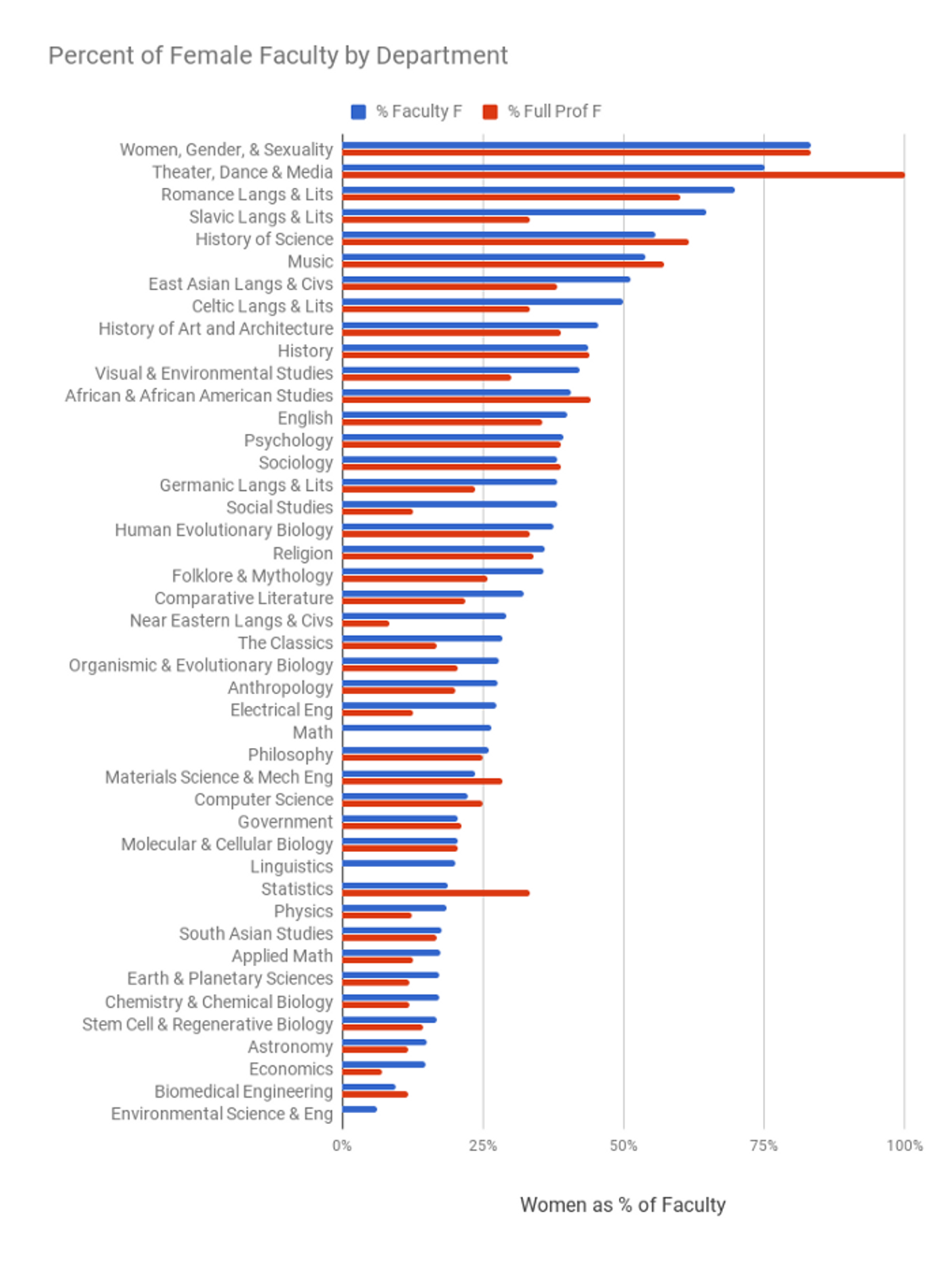 If we narrow our consideration to just tenured faculty (i.e. full professors), we find an even starker disparity. Tenured faculty are even more overwhelmingly male than faculty overall.

Several language departments have a majority of women among their faculty overall, but only a minority of women among full professors. For example, Slavic Languages and Literature drops from 65% (female faculty overall) to 33% (female full professors) and East Asian Languages and Civilizations drops from 51% to 38%. This is probably because these departments have many non-tenured preceptors, who are largely female.

Some bright spots, but overall cause for concern

Due to historic underrepresentation in STEM fields, we might expect STEM departments to have relatively low percentages of full female professors.

These STEM departments fare better than several social sciences and humanities departments like anthropology (17% of full professors are female), classics (17%), social studies (13%), and government (21%). However, it’s important not to overstate this, since — as we’ll see in the next section — SEAS overall has a far smaller proportion of women than the social sciences and humanities. 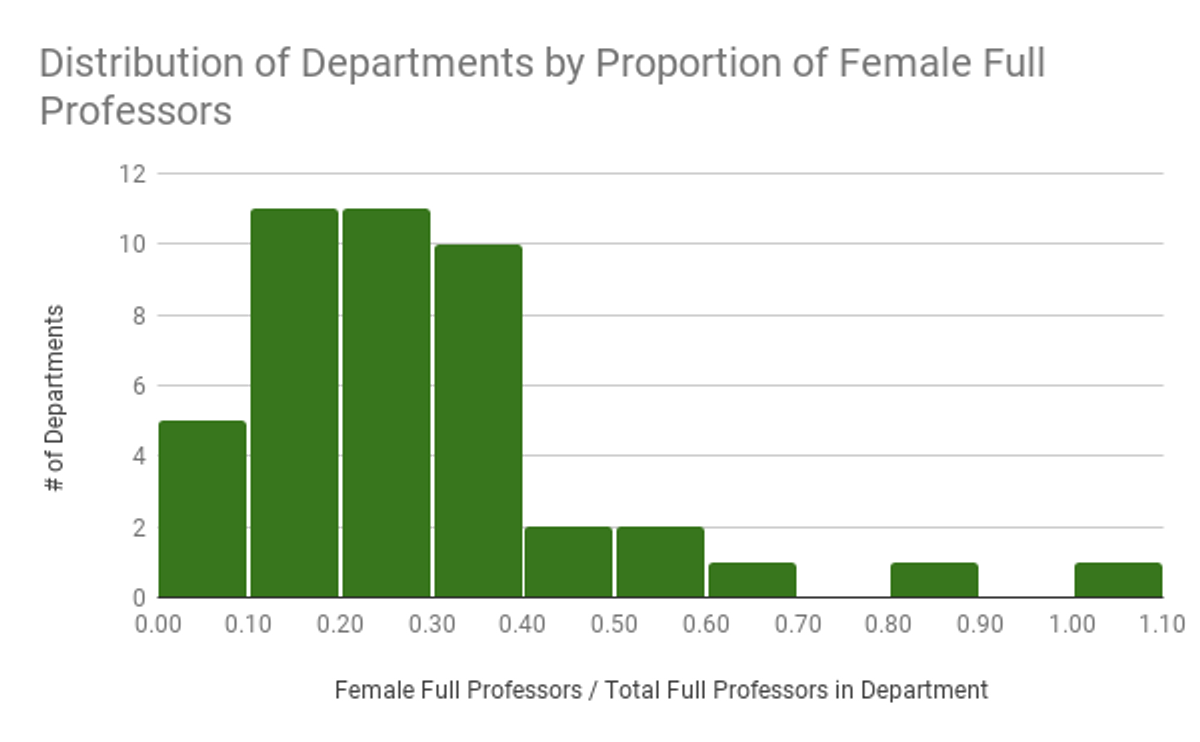 The more senior the position, the lower the proportion of female faculty. 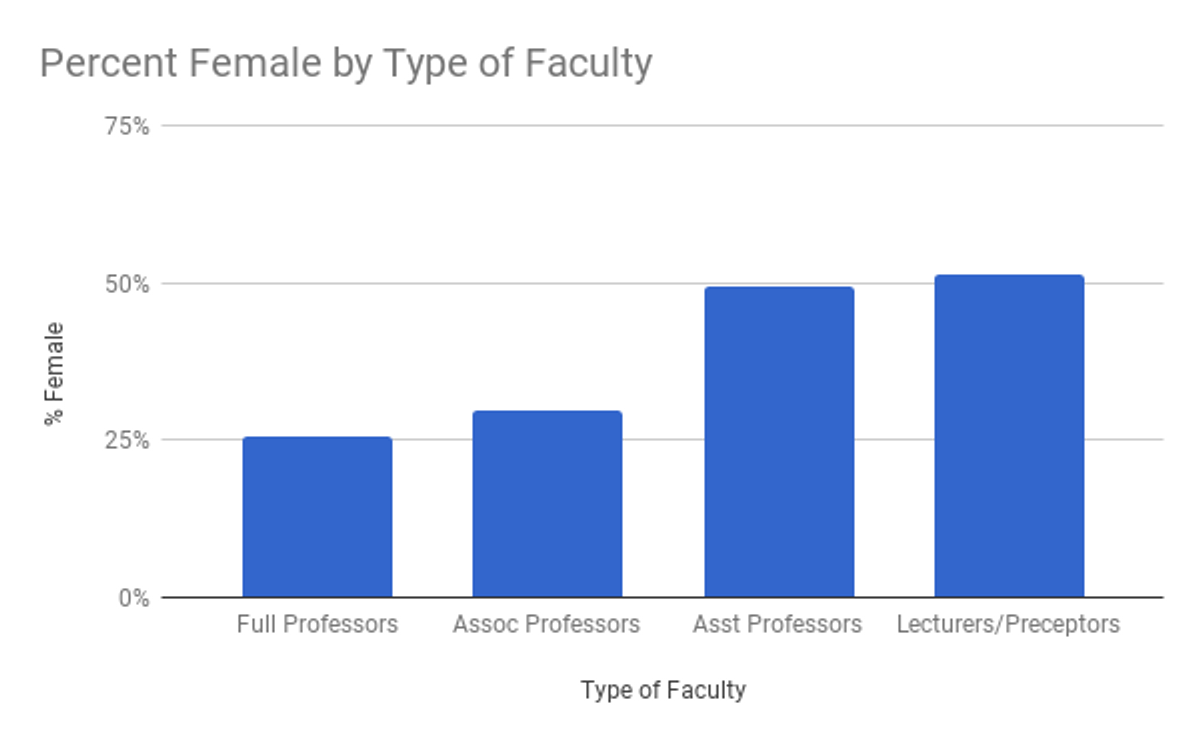 Not all Harvard divisions have the same disparity

When we group the departments by division, interesting patterns emerge. The social sciences, arts and humanities lead in the percentage of female tenured faculty at 32% each, while SEAS and sciences lag behind at half that (16% and 15%).

Looking at tenure-track faculty (i.e. associate and assistant professors), the percent of women jumps across the board. The arts and humanities and sciences lead, with 52% and 50% respectively, compared with social science and SEAS, at 35% and 23% respectively. 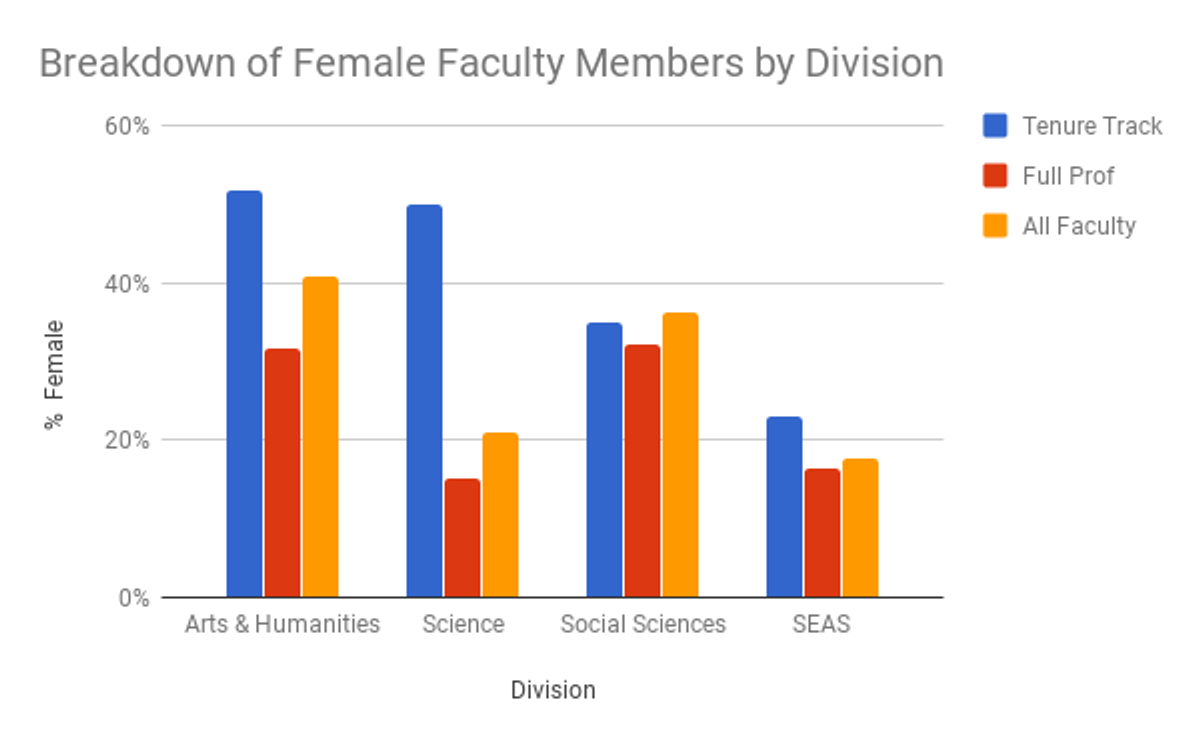 It’s probably a combination of both. According to Harvard’s Faculty Development and Diversity report, Harvard has decreased the percent of tenure offers going to women, with only 38% of external tenure offers going to women last year compared with 45% and 50% in years past. Women and men have equal rates of success in tenure review (68% for women, 69% for men), but only 65% of women stood for their review, compared with 78% of men, so only 45% of women achieve tenure compared with 54% of men.

The source of the disparity in tenure rates is that women are leaving at higher rates than men. These results indicate that Harvard needs to do a better job recruiting women and getting them to stay to improve the gender balance in tenured faculty.

Indeed, The Crimson found similar concerns with female faculty retention when it interviewed faculty and administrators in 2015.

What comes next for Harvard

Increasing the gender diversity of faculty at Harvard is a thorny, multifaceted issue, so there’s likely no silver bullet. Harvard will need to use several complementary, long-term strategies to start moving the needle on this problem. But, as we’ve found, one critical piece of the problem is improving the retention of female tenure-track faculty. Some solutions that Harvard faculty have proposed include reducing workplace hostility, improving mentorship, and stronger parental leave policies.

Harvard certainly has a lot of work to do to achieve gender balance among its faculty. But we think there are definite steps in the right direction that Harvard can take.

Limitations of our study

We acknowledge that our research isn’t perfect for a few reasons. For one, we double-counted faculty members in multiple departments. For instance, a professor of economics and government would be counted in both departments. Thus, our overall counts of professors may be incorrect — indeed, there were disparities between our counts and Harvard’s Faculty Development & Diversity report. Second, since we manually reviewed departments’ websites, our data will necessarily reflect any inaccuracies on the websites, plus any counting or tabulating errors we might have made.

In short, we might well have made mistakes. That’s just one of the reasons why we’re making our raw data and analysis public, as we always do. We encourage you to play around with this data and let us know if you find any errors or other interesting insights.

Keep an eye out for part two of this series investigating faculty diversity!

How Diverse are Harvard Employees? A Study of Gender and Race