And they say arbitrage doesn’t exist in the real world

Who needs Chaucer? Harvard’s student organization events are so good that 37.3 out of every 10 students attend them. Overestimating attendance is advantageous for clubs, which receive UC funding for food, transportation, and instruction on a per-student basis. A follow-up report in October indicates that the UC Finance Committee — FiCom for short — is still looking for ways to confirm club estimates of attendance and spending.

In the meantime, anarchy? It’s true that FiCom recently instituted a “New Online-system for Vetting Applications” also known as nova, which recently suffered a hacking attempt. Could it be from some foreign entities wanting some funding for their own highly-attended events? (FiCom says no: it was just a generic bot attacking any website that it saw.)

Either way, for the less hacking-inclined, this article discusses UC grant data from the 2015–2016 school year and how clubs can use certain trends to their advantage:

Keep note: This is a report on the 2015–2016 school year, and FiCom funding policies and practices have changed significantly since the initial analysis was run. Stay tuned for a 2016–2017 report later this school year!

Part 1: The early club gets the grub

Examining the ratio of allocated : requested — that is, how much the club received vs. how much they asked for — brings us to an interesting comparison of ratio against grant number, shown below. Grant 1 is the first of the school year, and grants with higher numbers are given later in the year. 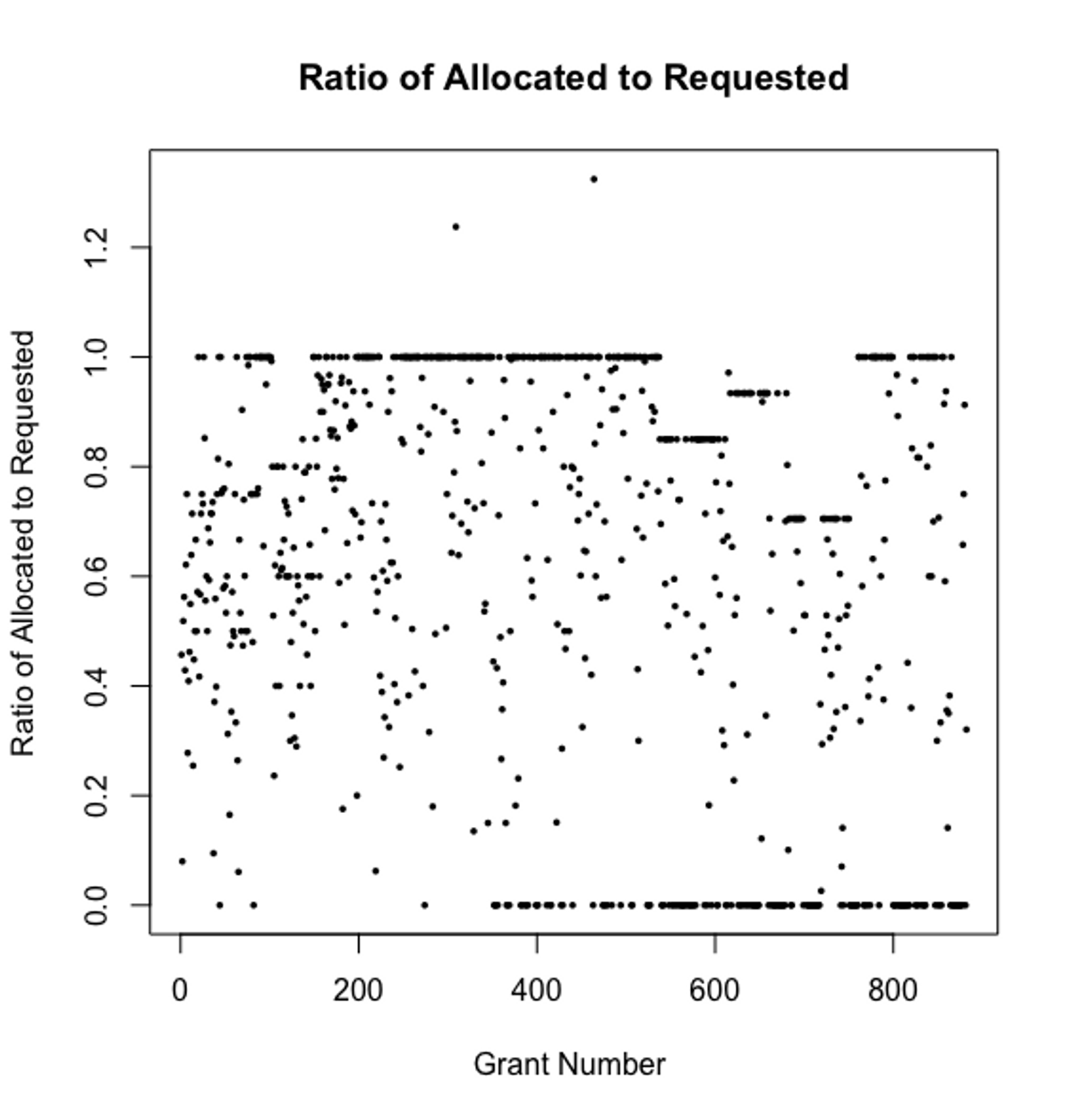 A number of properties stand out:

FiCom only grants $0 to clubs that make a mistake on their application or fail to show up for their grant interview, so they attribute the increase in $0 grants to clubs that run out of time to interview at the end of the semester. Dialogue with FiCom also suggests that they scale grants down proportionately when the weekly budget is exceeded.

It is then advantageous to:

Part 2: Presents of past and future

Total discrepancies are a result of missing data. We might expect retroactive grants to have a higher ratio for a number of reasons:

However, there is no statistically significant difference between the means of Upfront vs. Retroactive ratios, so retroactive and upfront grant applications seem to be equally successful.

It follows that clubs should use upfront grant requests as often as possible and overestimate expenses, minimizing the risk of spending more than they are allocated.

Meanwhile, the UC should continue to keep track of club expenses through photographed receipts and internal verification to ensure that money for upfront grants is used properly!

Part 3: The best spenders (aka, the UC’s finest sugar babies)

The same five student organizations consistently requested and received the most amounts of money. The Harvard-Radcliffe Dramatic Company takes the leaderboard with 28 requests totaling $24,175 — perhaps this will inspire other clubs to apply for grants more aggressively.

Behind these top 5 in allocated amount are IvyQ, Harvard-Radcliffe Orchestra, Bach Society Orchestra, Harvard Club Baseball, and Harvard Cheerleading. Out of the 20 clubs receiving $3,000 or more last year, 9 of them were athletic organizations, 4 were arts-related, and 4 were cultural organizations.

According to the policy guide, “Approved club sports teams will receive a maximum of $1,000 — $2,000 in UC funding per semester.” Many sports teams have come close to their maximum, whereas others do not take advantage of the maximums described in the policy guide. Read the guide — free money awaits!

To recap, clubs should:

In the spirit of open data, feel free to take a look at the FiCom records or the data and code used in this project if either piques your interest.

Meanwhile, thanks for reading and may all of your club events be impossibly popular!