A data-driven reflection on what worked — and what didn’t — in the 2016 Undergraduate Council campaign.

The campaign for President and Vice President of Harvard’s Undergraduate Council kicks off this week! At the time of writing, three tickets have thrown their hats in the ring: Catherine Zhang & Nick Boucher, Victor Agbafe & Michael Bervell, and Conor Healy & Parth Thakker. It’s shaping up to be a competitive race.

So what can the tickets do to set themselves apart?

Last year, the Harvard Open Data Project (HODP) successfully predicted the outcome of the presidential election, and in doing so, we gathered data to form hypotheses about what strategies correlated with a ticket’s electoral success. Chris Kuang of HODP provided a detailed analysis of the results. Here, we’ll recap our biggest findings and how this year’s candidates can use them to their advantage.

For reference, here are the vote tallies from last year: 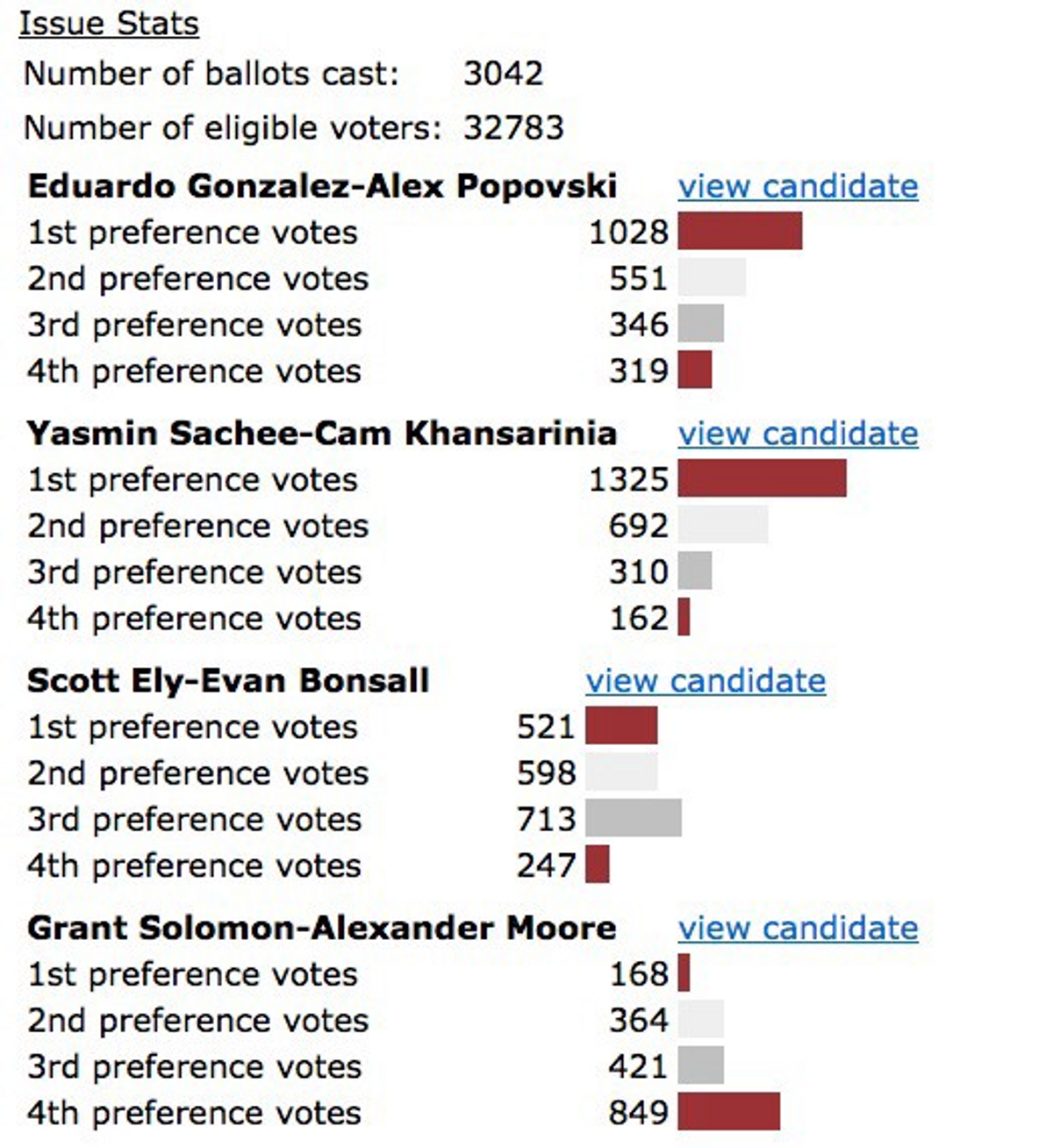 Last year, we measured social media outreach in two ways. We looked at the total number of likes on a ticket’s official Facebook page. We also considered the sum of likes on profile pictures featuring a ticket’s promotional “frame” on Facebook.

Ranking the tickets by either of these metrics gives exactly the same order as the actual vote tallies (that is, the greater vote-getters also got more social media engagement every single time). Social media success is very strongly correlated with electoral success — but let’s not forget that correlation does not imply causation.

If you create a ranking of the tickets based on either of these metrics, it produces the exact final ranking of the candidates in the actual election results. (Now is likely a good time to remind readers that correlation does not imply causation.)

Our analysis indicates that gaining serious name recognition through both a popular Facebook page and getting a wide network of Harvard students to change their profile pictures in support is key to winning the election.

Freshmen consistently turn out at far higher rates than upperclassmen do in UC elections, both in the fall and the midterms. While we don’t have stratified turnout data by class for last year’s presidential election, the only class year that Yasmin and Cameron won were the freshmen, so it is reasonable to infer that the freshmen had high turnout relative to other classes. In addition, from qualitative interviews with fellow students, upperclassmen are far more likely to already know a candidate personally and have made up their mind. On the other hand, it is likely that fewer freshmen will know the candidates on a personal level and will be more open to consider all candidates.

For these reasons, personally meeting freshmen seems to provide the greatest return on investment for a candidate’s time. In last year’s (relatively unscientific) HODP election poll, the ranking of candidates among freshman exactly matched the final election results. In addition, the winning pair, Yasmin Sachee and Cameron Khansarinia, knocked on freshman doors, though they were not the only candidate pair to do so.

Responses to a 2016 HODP pre-election poll asking for a student’s intended first choice ticket, stratified by class.
Upperclassmen matter, too, but there’s some evidence that spending additional time with freshmen can yield great results. This conclusion is based on the traditionally higher freshman turnout and the decreased likelihood of freshmen having made up their minds through personal relationships.

When campaigning to be president of the UC, it might seem natural to spend time schmoozing with members of the UC and leaders of student organizations. While this is likely valuable to some degree, endorsements were not a great predictor of final election results. Last year, a ranking of endorsements from student organizations (weighted based on organization size) would have predicted a win by Eduardo Gonzalez and Alex Popovski, who ultimately came in second. A ranking of endorsements from UC representatives would have predicted a win by Scott Ely and Evan Bonsall, who finished in third. Finally, The Crimson Editorial Board endorsed Eduardo and Alex last fall.

All in all, none of these metrics would have correctly predicted the results of the election, though this does not necessarily imply there isn’t a causal relationship between endorsements and voting.

Endorsements as a total number of members in endorsing organizations.

Endorsements from sitting UC representatives in fall 2016.
Candidates should be cautious not to focus too much on wooing student leaders, and instead focus on individual voters.

When we think about national politics, we often think that campaign spending strongly correlates with electoral success. However, this relationship does not necessarily hold for Harvard’s UC presidential elections. Last year, the winning pair was third out of four tickets in total spending.

Candidates are permitted to spend up to $200 on their campaigns, and two pairs were within $5 of this amount last year. However, the winning pair was the one that spent the bulk of their funding on social media and a gimmick targeted at freshmen. Yasmin and Cameron spent a total of $163.73 on their campaign, $78.23 of which was spent on social media campaigns (Snapchat filter and Facebook promotions). Although they were third in total spending, they led the pack in spending on social media, which, as we’ve seen above, is strongly correlated with electoral success.

In addition, Yasmin and Cameron spent $30 on puzzle pieces, which they gave out to voters, particularly freshmen. This giveaway may have helped them at the ballot box. It’s worth noting that the second-place ticket, Eduardo and Alex, was the only other campaign to come up with a free giveaway gimmick (stickers, in this case).

Yasmin and Cameron’s smart move to focus their funding on social media, name recognition, and freshmen may have contributed to their success in the election.

While this analysis should not be read as a perfect formula for becoming the next UC President, the Harvard Open Data Project hopes that it provides a useful roadmap for what general strategies tend to be correlated with electoral success. To review: