During the fall of 2018, the Harvard Undergraduate Council (UC) sent out a survey asking undergraduates to determine whether they felt satisfied with the social spaces offered by Harvard, and whether freshman students in particular, with no specialized central location to gather, felt isolated. The survey included questions such as “Was Annenberg sufficient for your First-Year social experience?” and the data was sent to Harvard Open Data Project (HODP) with the goal of understanding what undergraduate students wanted in terms of a social scene. This data focuses on whether students consider Annenberg to be a social space for first years and Smith Campus Center for all undergraduates, and the difference between first-year and house life social scenes. 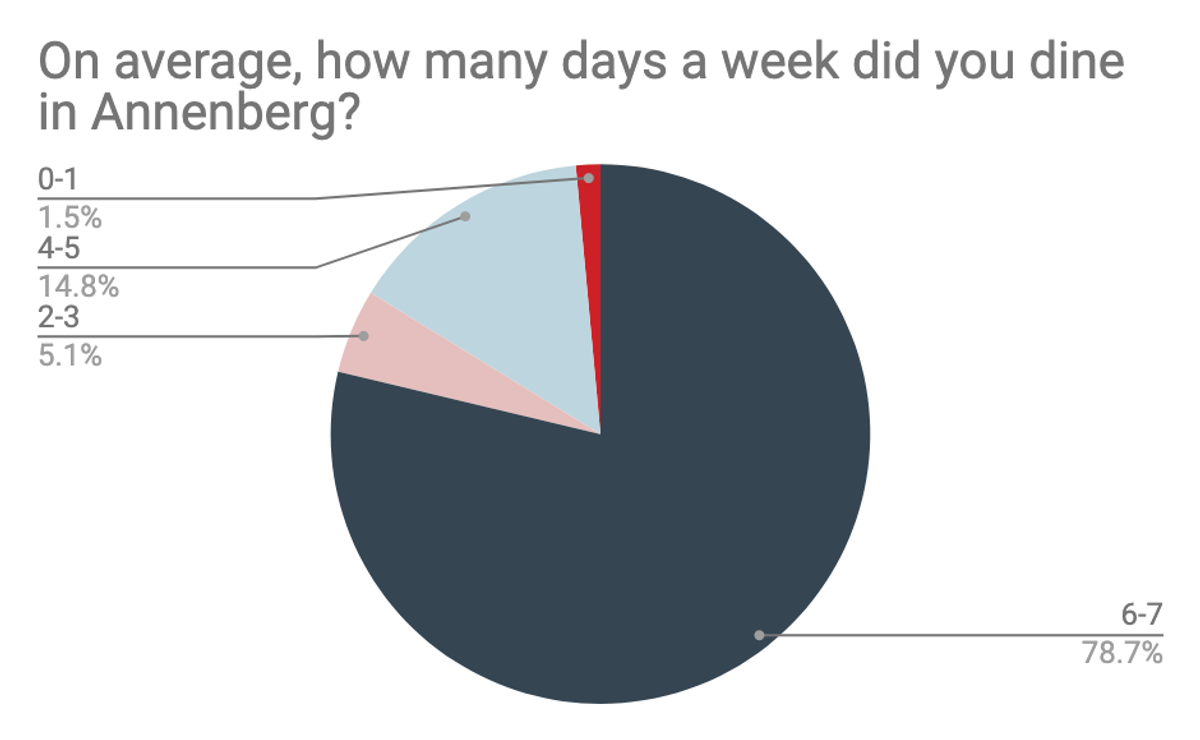 Given that 21.4% — over a fifth of First-Years — dine there 4–5 days a week or fewer, Annenberg may not provide as optimal a space for students to expand their social circles as one might believe. Rather, many students eat out quite frequently, often with the same friend groups, or skip meals, limiting their opportunities to meet people outside of their established circles. Many students may also choose to eat in house dining halls. 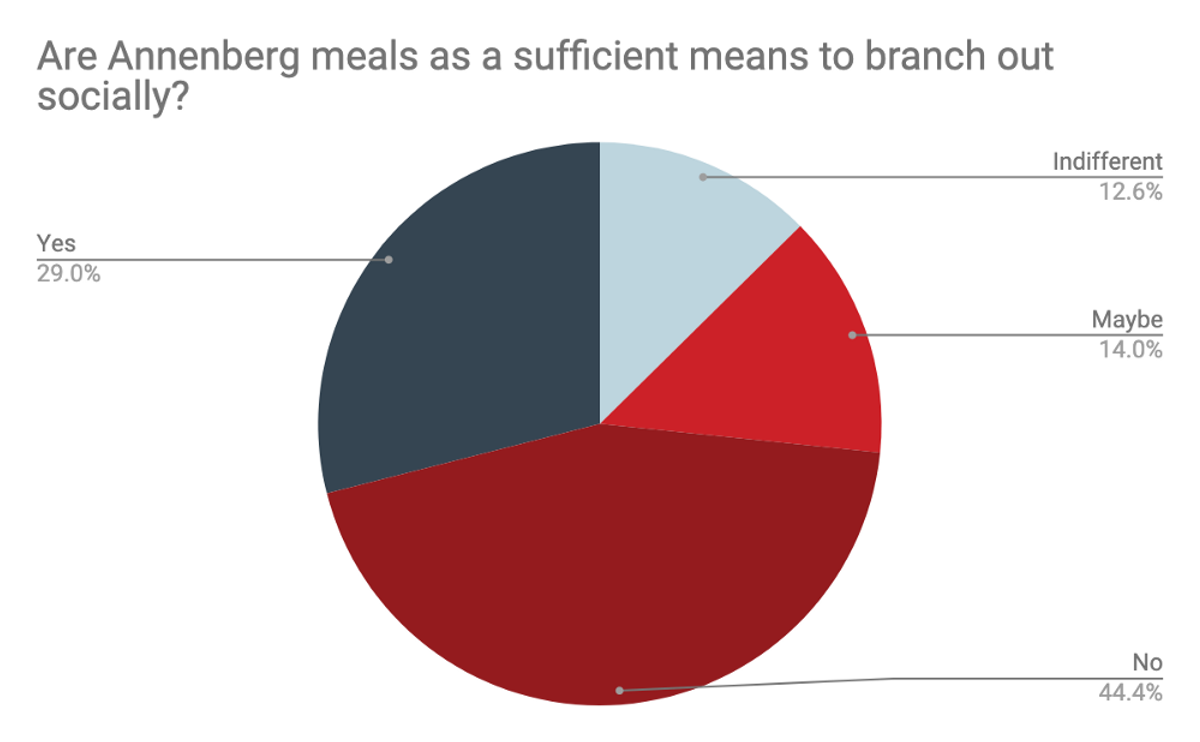 When asked for their outlook on Annenberg meals as a sufficient means to branch out socially and meet people outside of their dorm or entryway, only 29% of survey respondents affirmed that it was, whereas nearly half of students explicitly expressed that it was not, and the remaining 27% indicated their indifference or selected “maybe.”

49% of respondents either strongly disagreed or disagreed that Annenberg provided a sufficient social experience, and only 26% agreed or strongly agreed. 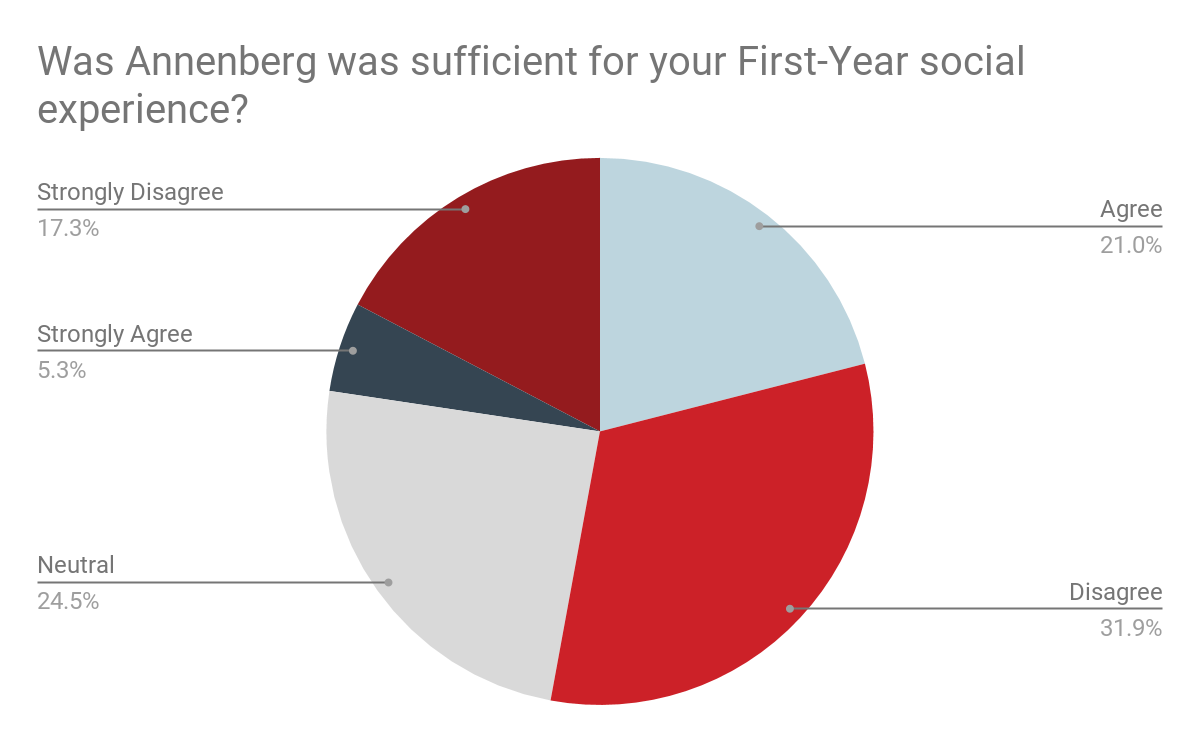 Thus, we find that Annenberg, often regarded as a first-year social space, may not be as conducive to building or expanding one’s network of connections.

When considering social spaces specifically for First-Years, one might think of Smith Campus Center, opened this school year, as an fitting space. However, we find that only 6.9% of survey respondents frequent the student center to socialize. Most students go to Smith to study or attend meetings. Furthermore, we find that a lounge, movie room, kitchen, and pool table would be First-Years’ most desirable elements of a social space, in that order. While Smith Campus Center provides lounge areas in the Harvard and Collaborative Commons and on the 10th floor and two pool tables on the 10th floor, it falls short in fulfilling the other desired amenities. Further, the amenities that it does provide are often unavailable due to the increasingly large volume of traffic in Smith on a daily basis as the 10th floor is being occupied as a space for The Heights, a new restaurant that recently opened this past semester. Tables that were once used for studying are now occupied by patrons of The Heights, so students are forced to study in recreation rooms rather than enjoy the social amenities of the pool tables and foosball tables. 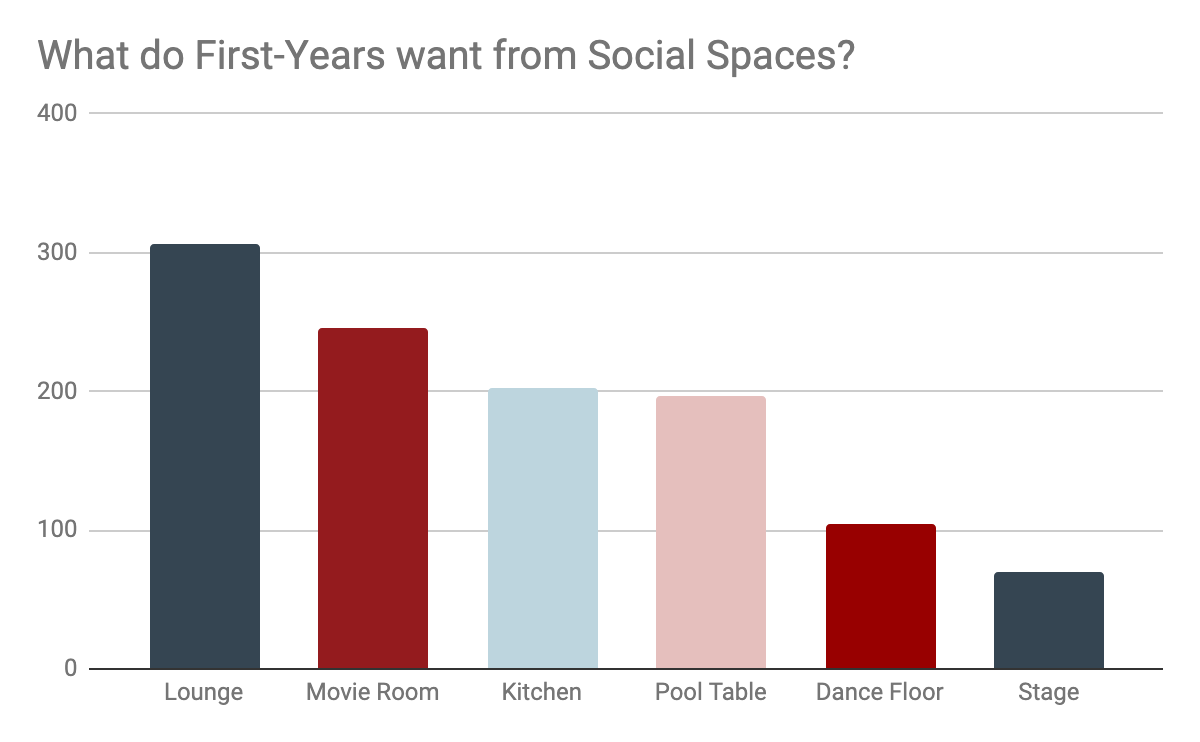 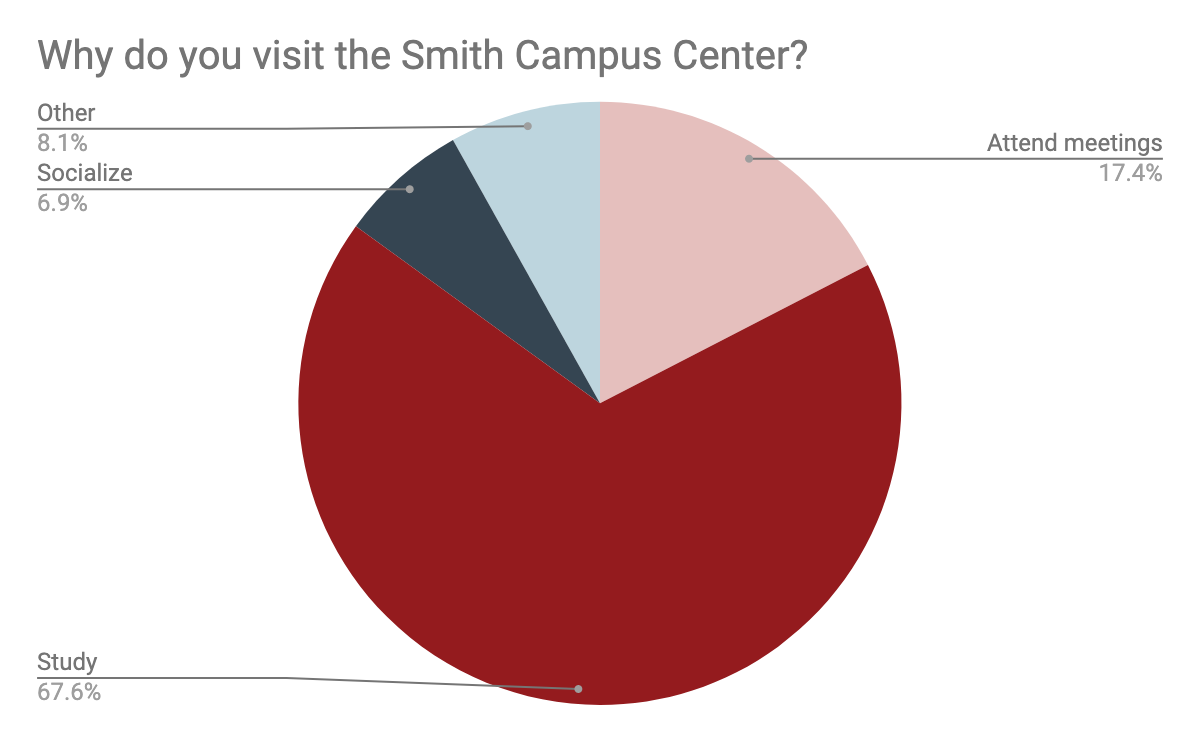 A point of further study would be in considering spaces like first-year common rooms that have kitchens and observing whether these spaces are still used for studying. The addition of a social space including movie rooms and kitchens may not necessarily foster a stronger sense of a social space if students are still studying in spaces that already offer these amenities. Additionally, we could further observe the frequency of usage of kitchens that exist in first-year dorms and how they might contribute to one’s social experience to establish whether the addition of a kitchen would be effective. 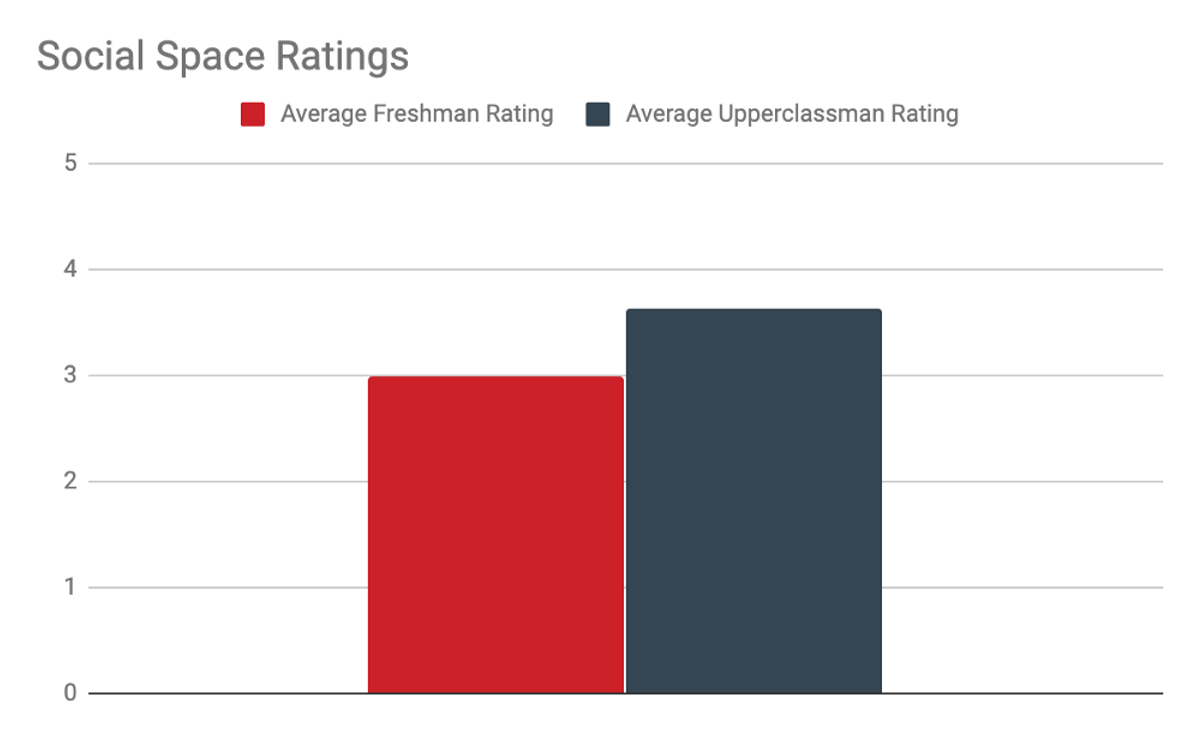 When First-Years have free time, we find that 57% of them spend it in their room and 16% go to the library. To determine whether this choice is directly due to the lack of a better social space for First-Years or simply to personal preference, we followed up by asking students whether the existence of a social space dedicated to First-Years would have aided their sense of class community. 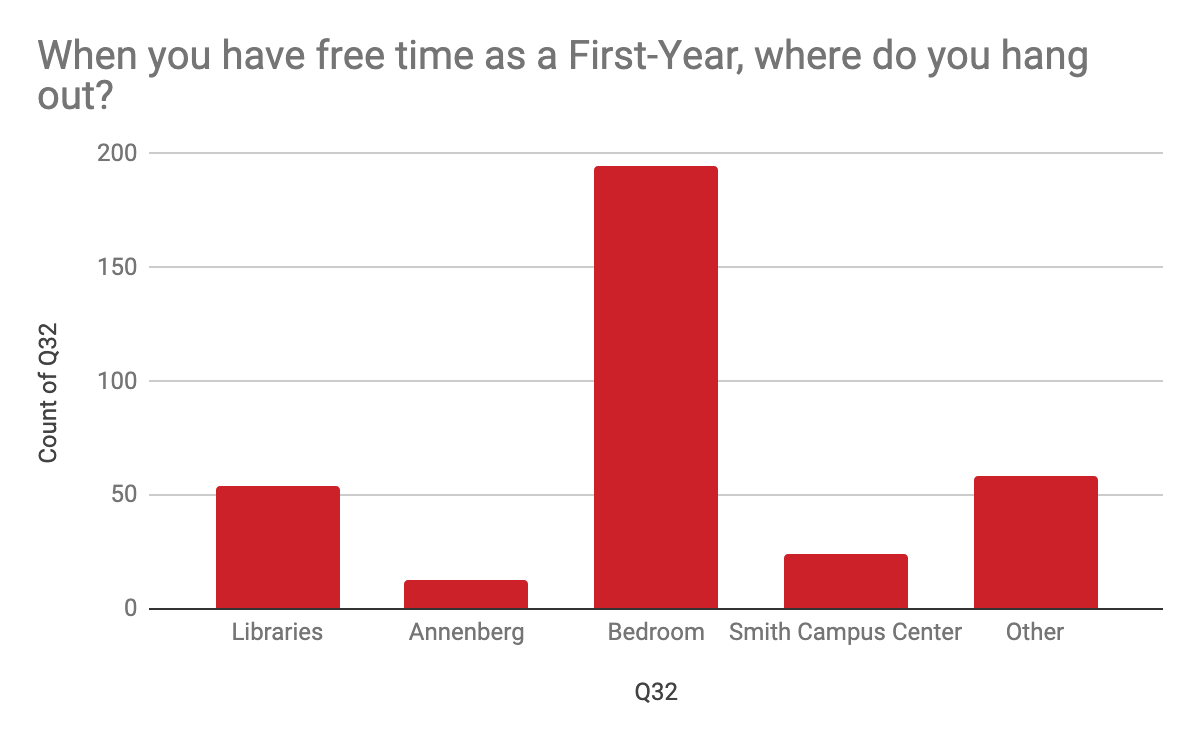 Half of the 435 respondents indicated yes, 27% were indifferent, and 23% of students did not think it to be necessary. Overall, our findings indicate that there is moderate support among First-Years for the creation of a new social space, and that current social spaces for First-Years are not functioning as intended. In addition, the high ratings for upperclass social spaces and the majority of freshmen spending free time in their rooms suggest that a first-year social space would best be implemented by finding a way to integrate the space with first-year housing. 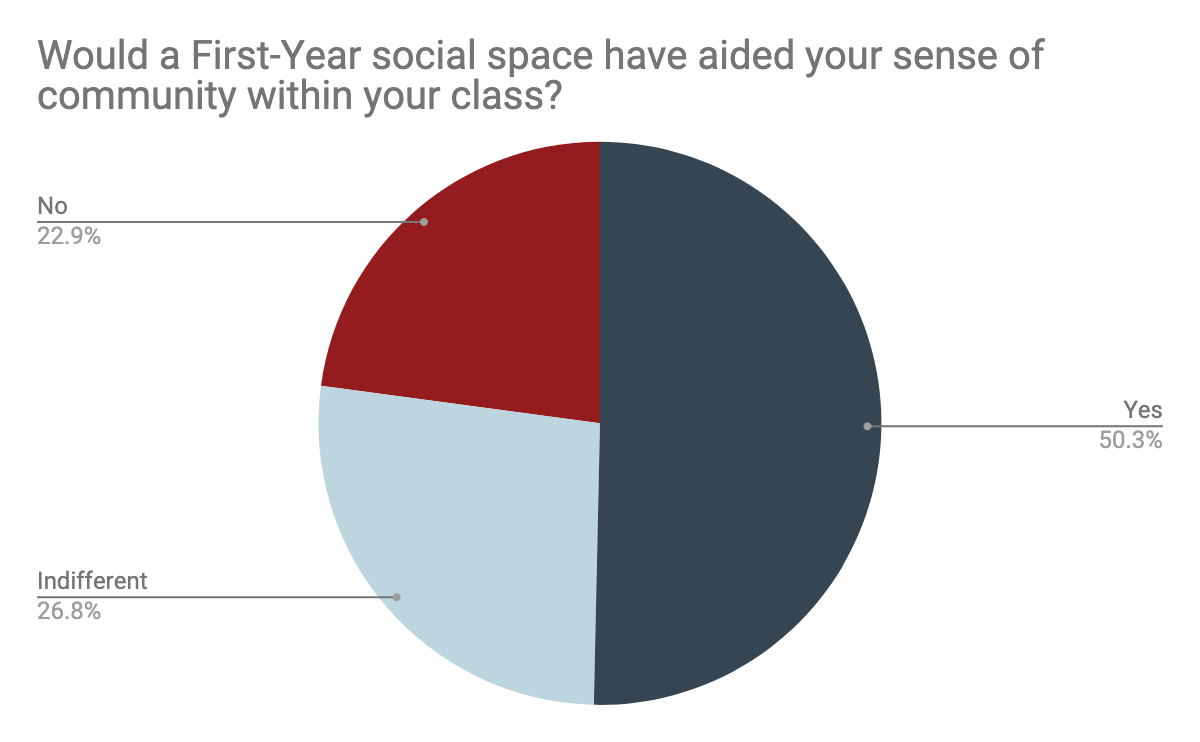 This analysis provides a fairly good gauge of student opinion on the issue of first-year social spaces since it asks direct questions about the issue. However, one shortcoming of this survey is that when asking people whether they want more of anything, most will say they do, even if in practice they would not benefit from the changes. It may be worth conducting more analysis on the practical effects of a first-year social space.

One good way to do so is to evaluate the role of social spaces in upperclassman life, as freshmen currently don’t have any social spaces for which we can evaluate the effects. Examining the correlation between social satisfaction and use of House social spaces may provide a better analysis of the practical effects of a new social space for freshmen.

Another useful point of further analysis may be surveying students on how they spend their time. While most students use the Smith Campus Center for studying, it remains a question of whether that is because Smith Campus Center makes for a poor social space, or because students simply spend most of their time studying regardless of location. In either case, finding a differential may be worthwhile.

It should be noted that the questions in the survey could be redesigned and framed to be less biased. Some students reported that the survey questions and responses available led them to form artificial conclusions about whether their social experiences could have been improved by a first-year social space.

Finally, while this would take more extensive resources, conducting follow-up surveys with students that are known to participate in social events on campus (possibly by coordinating with CEB) would provide a better way to estimate the practical effects of additional social spaces and avoid possible self-report bias.

We believe that this analysis provides valuable insights into the opinion of the student body on the first-year social experience and should be used to inform policy decisions on whether or not to build a new first-year social space. This analysis shows student support for the idea and hints toward the potential benefits of a new social space. However, we firmly support further analyses in the future to better inform administration and UC policy on student social spaces.

Transitioning to college, especially to a stressful environment like Harvard, is a tricky journey to navigate. Oftentimes, the first friendships students make are the ones they cherish forever. In order to facilitate the growth of freshmen both in and out of the classroom, Harvard can consider creating more social spaces specifically for freshmen to meet with their peers and form meaningful relationships. Currently the majority of First-Years spend their free time in their rooms. While the Smith Campus Center was intended to be a social space, it is used more as a study space than a social space. Annenberg, one of the only public spaces that is exclusive to freshmen, is not viewed as a sufficient social space by students surveyed. Upperclassmen are more satisfied with the social space quality than First-Years are, indicating that Harvard isn’t meeting some student needs.