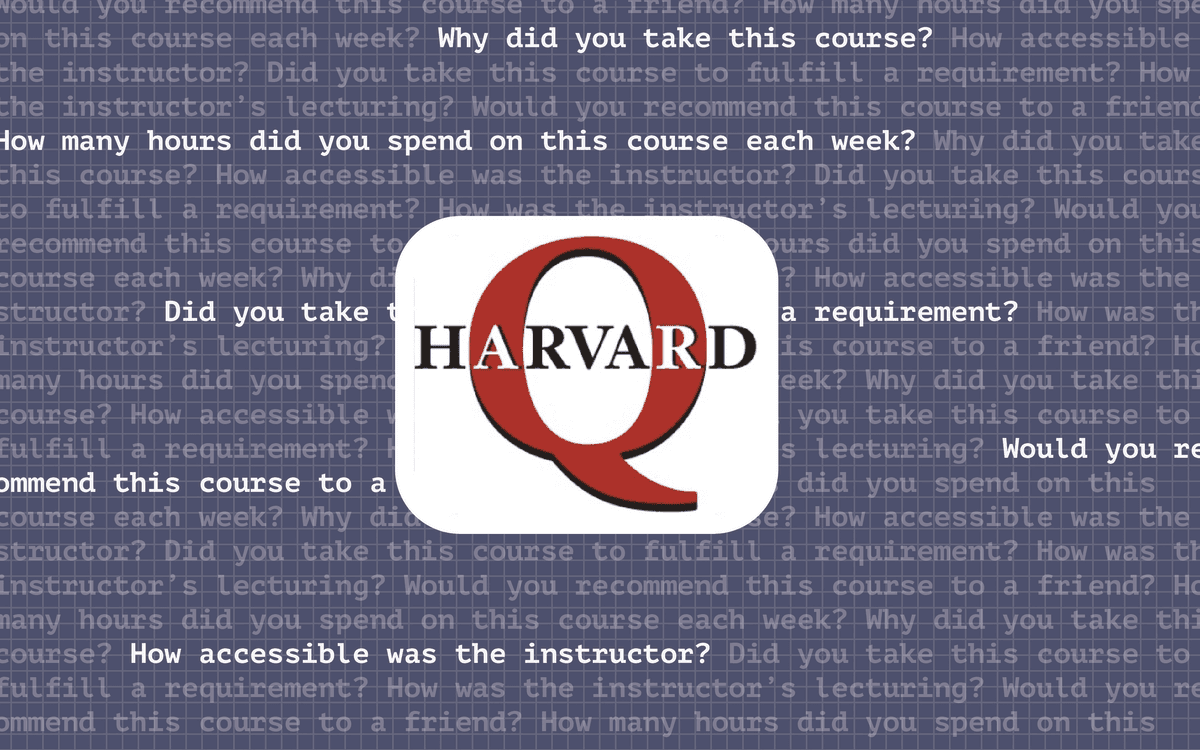 Q's about the Q guide

How effective is the Q Guide? And what can it tell us about the STEM-Humanities divide?

For 45 years, the Q Guide has served as an invaluable resource for Harvard students choosing their classes. It provides many data points for each class, but perhaps the most salient are the overall course rating and the weekly workload.

The benefit of this data lies in its potential to drive us toward well-taught classes and away from poorly-taught ones. A potential harm lies in its ability to enable our baser instincts: maybe we like easier classes more than hard ones, and maybe the Q guide makes it easier to act on that.

We set out to explore the potential impact of the Q guide by answering the following questions. Do high course ratings correlate with increases in enrollment (and vice versa)? And do high workloads correlate with low course ratings (and vice versa)? Along the way, we happened on some interesting results about the STEM-humanities divide at Harvard.

We collected our data directly from the Q guide with a Python scraper using the Selenium library. We limited ourselves to courses offered in Spring 2018 and Spring 2019. For each course, we collected the department, overall rating, "recommend to a friend" rating, workload, enrollment, and the "reason enrolled" responses—as an elective, concentration requirement, Pre-Med requirement etc.

We cleaned our data and conducted analysis in R. To clean our data, we excluded courses offered in only one semester or with incomplete data. We also converted absolute changes in enrollment to percent changes to standardize between class types (e.g. seminar versus lecture).

A common problem with rating systems like Yelp’s or Uber’s is that responses skew high and rob users of the full theoretical range of a 1-5 rating system. Perhaps unsurprisingly, Harvard’s Q guide also suffers from this grade inflation. The average overall course rating across the University is 4.13/5, with a standard deviation of 0.6. Workload averages 5.9 hours per week, with a standard deviation of 2 hours. 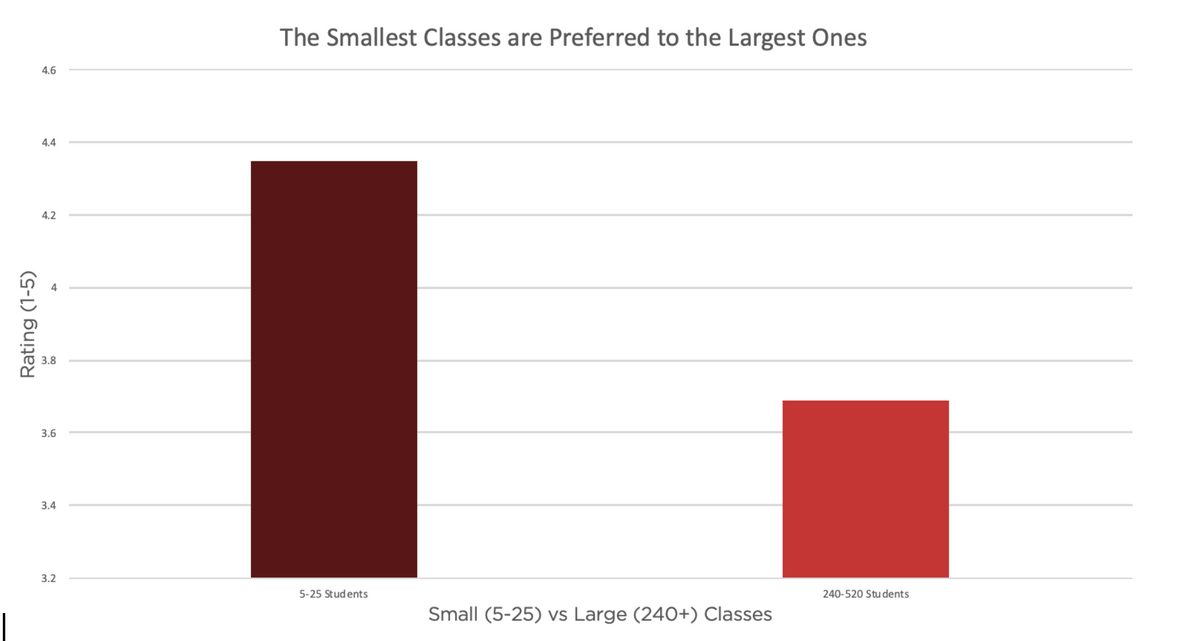 Below are the same averages for the 15 largest spring classes by enrollment. Almost all of the largest classes have below average course rating, and collectively average a 3.69/5. This is notable especially in comparison to the 4.3/5 average rating of classes with 5 to 20 students. The figures differ by 1.25 standard deviations, suggesting a substantial pedagogical benefit in smaller classes. An alternative hypothesis is that the largest classes often cover introductory material which is by its nature less interesting than what's covered in seminar-style courses. The largest classes also largely exclude the humanities, whose course ratings run higher than the University average, though this might be due to the humanities’ emphasis on small seminar-style classes. 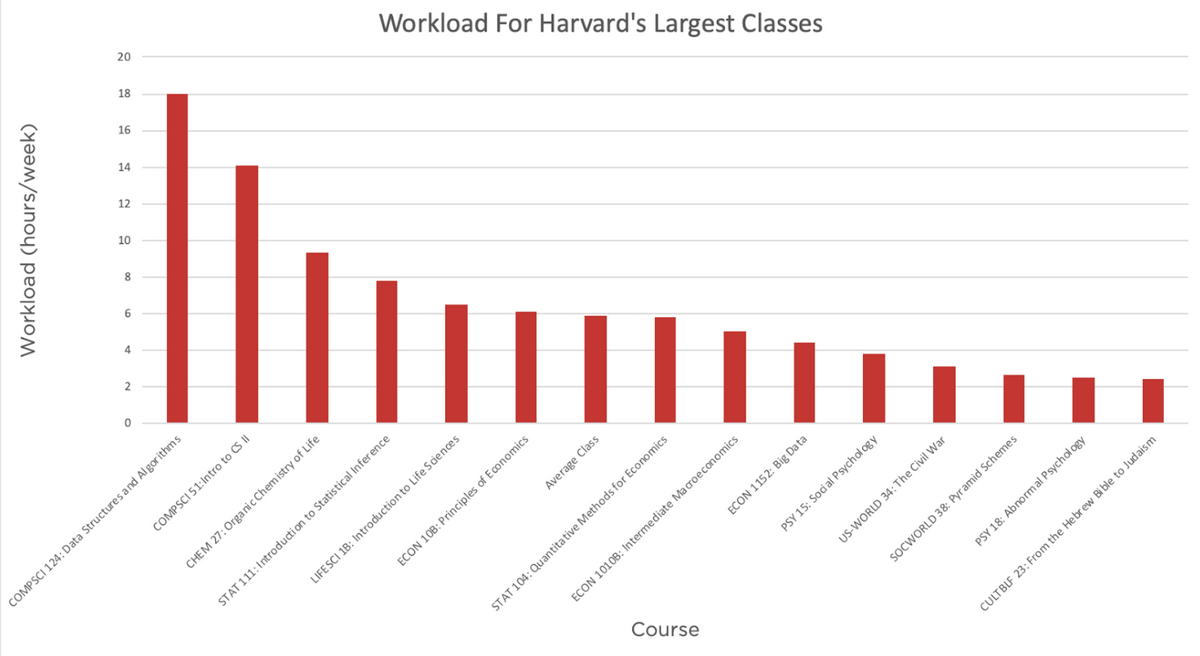 Reported workload in hours per week outside of class for Harvard’s 15 largest Spring classes by enrollment. 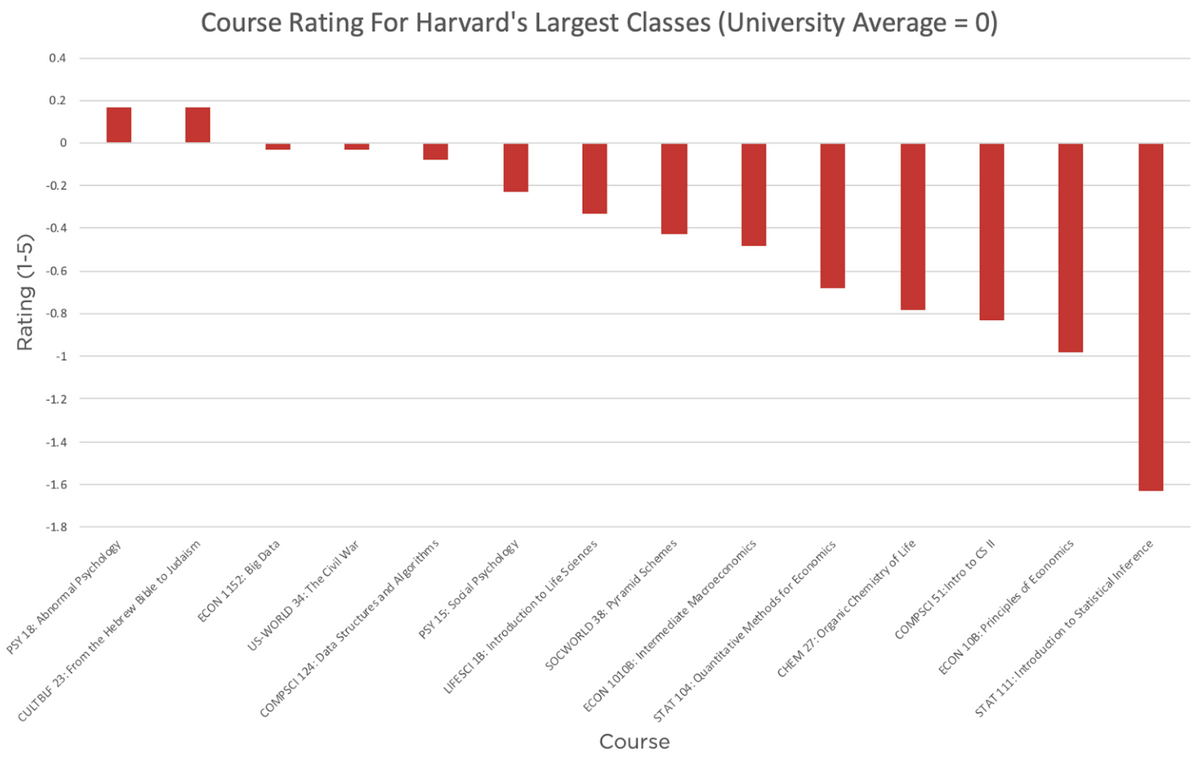 Below are the average (weighted by enrollment) course rating and workload for the twenty largest departments at Harvard by total enrollment in classes offered. We graph their difference with the University averages (4.13/5 and 5.9 hours) to highlight differences. 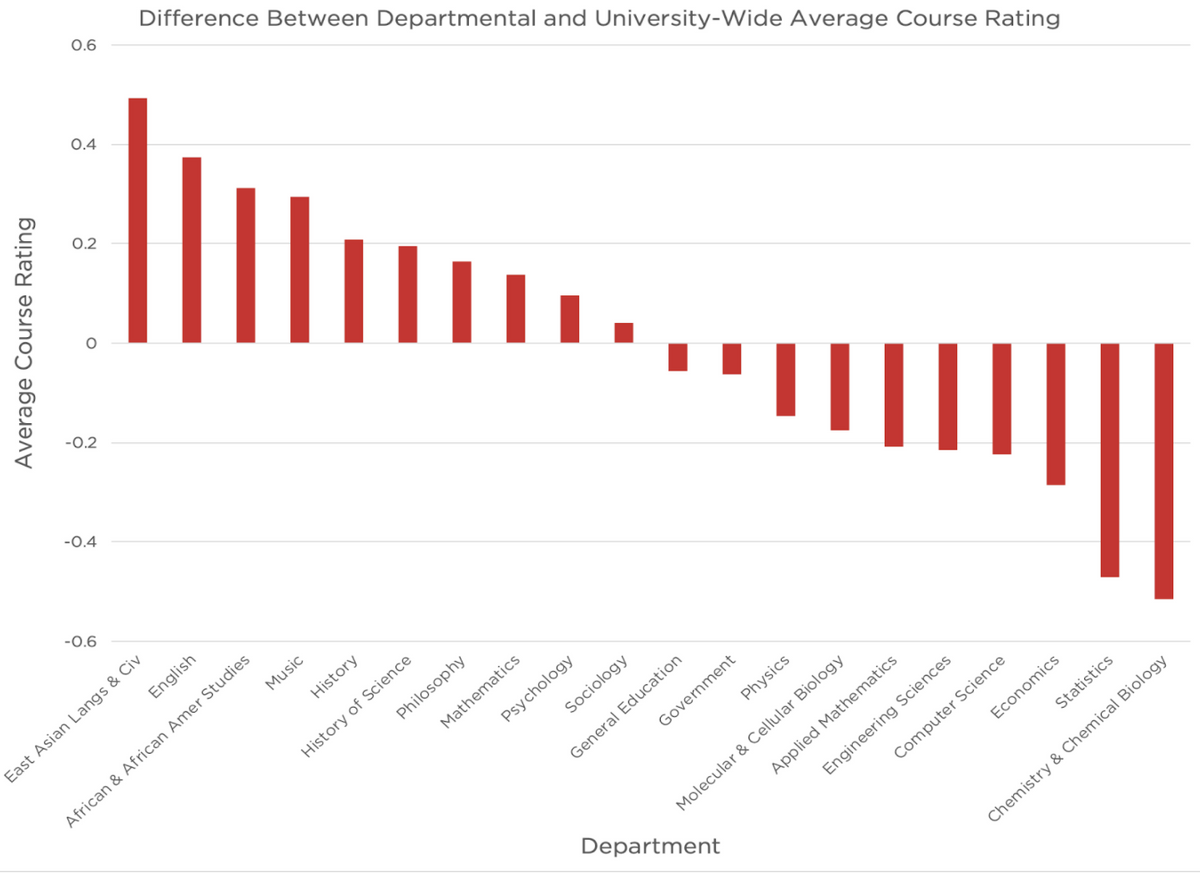 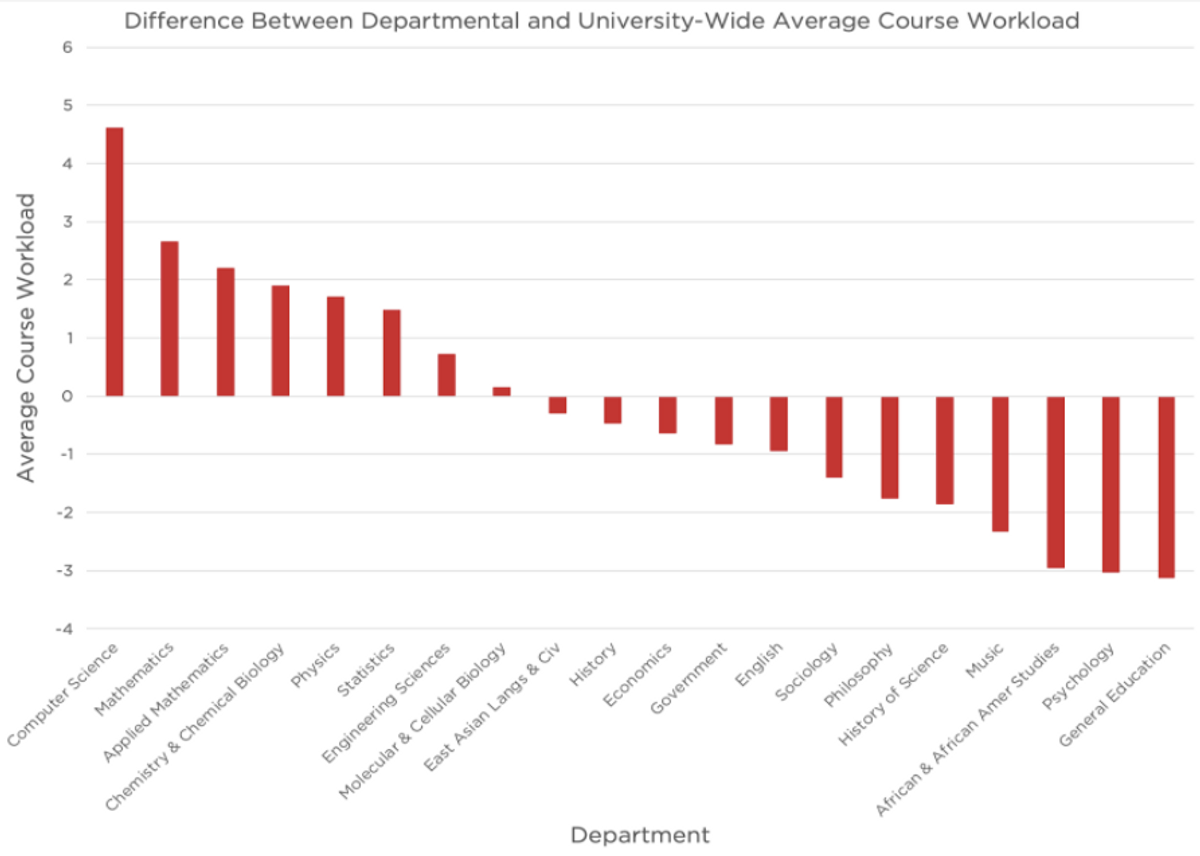 The relationship may actually be that humanities classes (which are those with the lower workload) are rated higher than STEM classes, for reasons other than than their relatively lower workload.

This would mean that workload was merely a confounding variable, masking something about humanities classes that relates to their higher ratings. 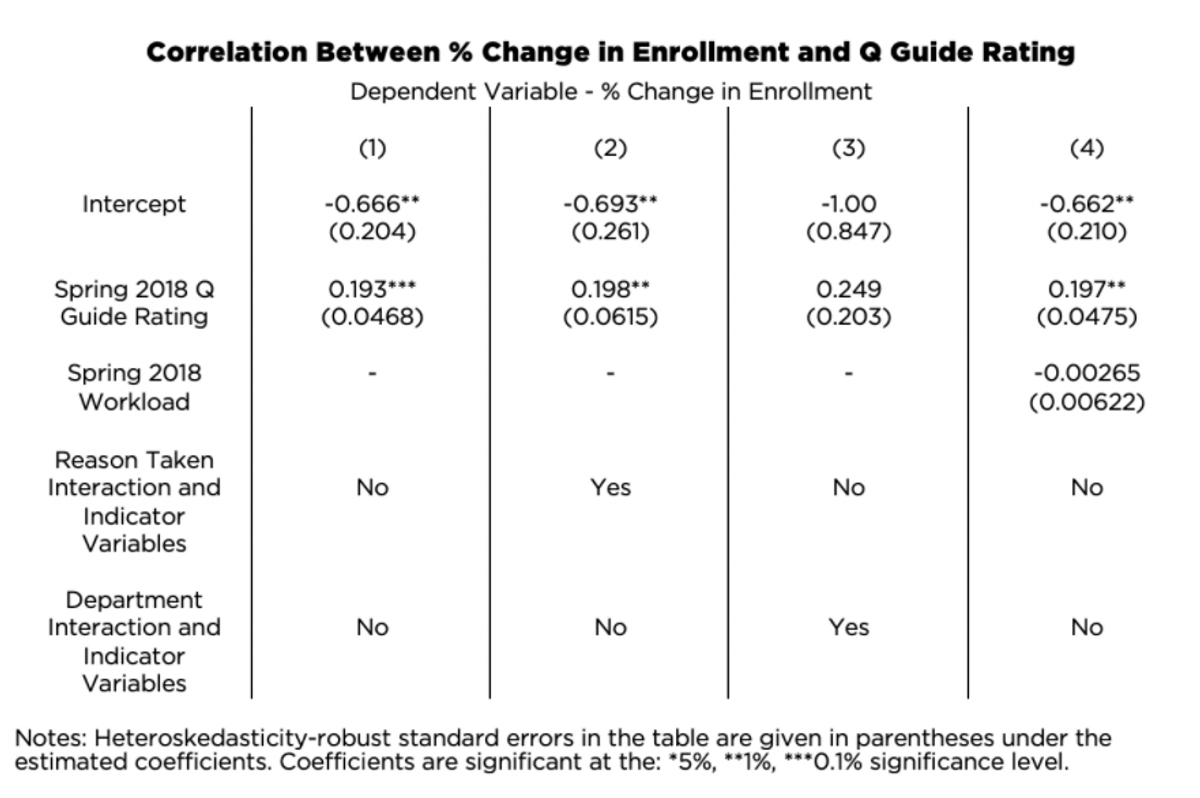 This table displays our most interesting regression results. Regressions can be read length-wise and share a common dependent variable (% change in enrollment). For example, the first column indicates that without taking into account workload, reason taken, and department, we expect course enrollment to decrease by 66.6% year-to-year (-0.666). However, we expect there to be 19.3% increase in enrollment for every additional point in its Q Guide score.

Our major findings lie in the relationship between rating and enrollment in the following year; there was a statistically significant positive association between the two variables.

Although the exact magnitude of the relationship varied by regression, in general, we saw a 19-20% increase in enrollment year-to-year for every additional 1 point increase in rating.

We did not find a statistically significant relationship between workload and enrollment nor workload and rating.

What about the classes themselves? Students significantly prefer the smallest classes to the largest ones. This disparity is probably unavoidable, but its size reminds us that Harvard’s biggest classes have a lot of room for improvement. The STEM-humanities rating divide also stands out. Notably, we eliminated differences in enrollment or class size as possible explanations for this divide. This suggests that the disparity has deeper roots. Barring the possibility that the humanities are simply more fulfilling (though maybe we shouldn’t!), those roots should be addressed.